Optimization of key factors in a biopharmaceutical process is necessary to meet the continuous rise in production demands. Choice of cell culture media and peptone supplementation is critical to process performance. However, medium development can be a multifaceted process requiring a large number of resources. To comprehensively cover all variables with the least time and effort, statistical methods are employed. Using statistical methods can help identify an animal free (AF) peptone that effectively enhances protein production for a particular process.

There are three basic questions to be answered when working with peptones: What is the best peptone for a process? What peptone concentration should be used? Should an individual peptone or a blend of peptones be used? Cell lines perform differently according to the base medium and peptone supplementation used, so it is critical to evaluate various media and peptones to identify the optimal medium and feed strategy. For example, different peptones can be used at different process steps to promote increased performance. Additionally, peptone blends should be considered as synergistic effects can vastly improve the efficiency of a process.

The scope of this research was to develop a new CHO medium through AF peptone supplement with statistical and analytical capabilities. The primary design criterion was to identify a new peptone supplement that exhibits performance superior to the control medium across a panel of CHO cell lines with various expression systems. Several peptones were available as potential candidates, so the initial criterion used to select among them was their suitability for use in the biopharmaceutical industry based on manufacturing and release specifications. Several rounds of design of experiments (DOEs) were conducted to narrow the number of peptones to only the best candidates.

Cell lines selected for this study expressed proteins using neomycin-resistant (NR), glutamine-synthetase (GS) and dihydrofolate reductase-deficient (DHFR-negative) expression systems, which were adapted to a commercially available AF hydrolysate-containing medium, which was included as the control. An in-house optimized chemically defined (CD) medium was the base medium for the study.

Study 1, Peptone Selection for Prescreening: Nine peptones were selected for prescreening based on their composition and characteristics. Three different CHO cell lines, representing each selection/expression system, were selected for initial peptone evaluation (data not shown). for the NR cell line, the best peptone produced ∼62% of protein compared with the control. For the GS CHO cell line, several peptones outperformed the control and produced ∼125% compared with the control. Protein expressed by the DHFR-negative cell line was not detected by the HPLC method used. Five peptones were identified for further evaluation.

Study 2, Screening in Microplates: Based on results from Study 1, five peptones were included in a screening experiment. A mixture design was used to analyze various blends of them. For the NR cell line, volumetric productivity in one blend was highest and was equivalent to its control (data not shown). The same blend was also the highest producer for the GS cell line, with several other blends out-producing the control. Overall, six blends were identified to be scaled up based on the production data.

During this study, it was noticed that two peptones (A and B) were consistently present in the top performers, either as blends with each other or with some other peptone, and had more significant effect on production than any other peptones. In addition, the predicted blend from the statistical design consisted of A and B, confirming that these two performed better than the other peptones in the study.

Study 3, Shaker Flask Confirmation: The best performers from studies 1 and 2, including the predicted blend, were scaled up to shaker flasks. Several blends and individual peptones performed equivalently or better than the control (data not shown). For the NR cell line, three blends produced ∼90-92% compared with the control. For GS and DHFR-negative cell lines, volumetric productivity reached ∼180% and ∼120% respectively. Again, the best-performing blends consisted primarily of peptones A and B, indicating that they would be ideal candidates for further analysis.

Study 4, Optimization Study: A response surface analysis was performed using peptones A and B with varying compositions and concentrations. Each cell line outperformed its respective control in all experimental blends except for the negative control, which was the CD base medium (Figure 1). The volumetric productivities in blends V, VIII, and XI were consistently highest across all three cell lines. The highest-producing blends for the NR cell line produced ∼140% compared with their control. For the GS and DHFR-negative cell lines, the highest-producing blends were ∼180% and ∼140%, respectively. Blends V, VIII, and XI were selected to be evaluated further. Additionally, the predicted blend from the design was a mix of A and B(blend IX in the design) and thus was included in further evaluations. 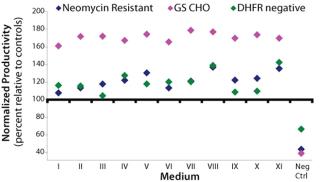 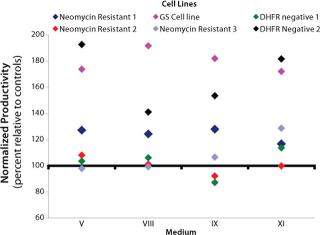 Study 6, Beta Site Evaluation: Media V, VIII, and XI were provided to a beta site for in-house evaluation. Cells were cultured and analyzed according to the site’s established methods. In addition, cultures were fe
d with respective bolus peptone feeds. Growth and production in media V, VIII, and XI were compared with a peptone-containing AF CHO control medium. Medium XI outperformed all others, including the control. Volumetric productivity in medium XI demonstrated an increase of ∼240% over the control medium (data not shown). Based on results obtained from the CHO panel screening study and beta-site evaluation, medium XI was selected as final formulation.

Study 7, Performance Confirmation in a Bench-Scale Bioreactor: An NR cell line was scaled up to a fed-batch, bench-scale bioreactor to confirm the performance of medium XI based on growth and production profiles with pH and glucose levels maintained. In addition, the bioreactor was fed with a single bolus peptone feed. The growth and production profile obtained from the study confirmed performance observed in shaker flasks (Figure 3). Medium XI proved to be the optimal final formulation. 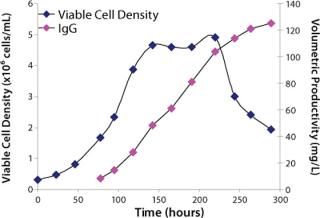 The objective of this project was to identify a peptone or blend of peptones to develop an advanced CHO medium formulation. To be successful, a formulation would be robust and could be used with various expression systems, it would be applicable to multiple CHO cell lines, and it would demonstrate enhanced performance compared with a commercially available control.

A wide range of peptones and blends were screened through a diverse panel of CHO cells using various statistical designs and confirmation studies to identify the optimized peptone(s). In the presence of peptones A and B (used individually or in blends), productivity was consistently higher than for other peptones. These two were evaluated further using DOE to optimize their performance in the base medium. Results from the optimization study demonstrated a production increase by 125-180% in all cell lines compared with their respective controls. Medium XI was chosen as the final formulation based on its overall performance.