In an effort to mitigate potential risks associated with the introduction of adventitious agents from animal-derived media components, the biopharmaceutical industry has largely shifted to serum-free and/or chemically defined media in cell culture production systems. Successful serum-free media formulations have been developed using plant-derived protein hydrolysates in combination with recombinant supplements such as insulin, transferrin, and human serum albumin, produced in nonanimal systems.

The performance benefit provided by any medium supplement is subject to its interaction with other medium components present in the basal formulation, as well as any additional supplements being employed. in some instances, a combination of supplements may provide better performance than is seen when supplementing with the individual entities. Here we demonstrate such a synergistic reaction between a wheat hydrolysate and recombinant human serum albumin used to supplement a chemically defined growth medium for SP2/0 hybridoma cells. 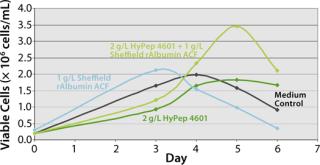 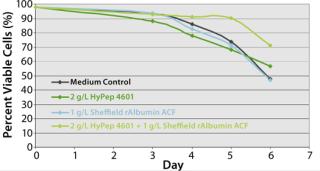 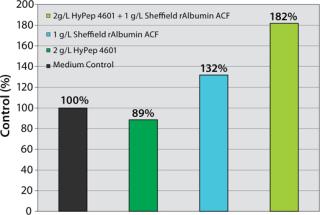