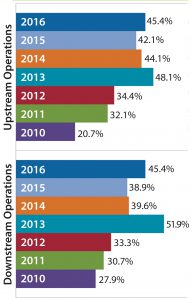 Figure 1: Percentage of biomanufacturers outsourcing at least some activity, 2010â€“2016

The major fluid products used in bioprocessing â€” culture media and buffers â€” are classically prepared in-house by rehydrating (dissolving and mixing) powders purchased from suppliers. Most bioprocessing facilities consider in-house preparation of these fluids to be a core bioprocessing task. However, some companies are outsourcing the work either by purchasing preprepared materials from vendors or hiring contract manufacturing organizations (CMOs) to prepare them.

Buffer fluid preparation is one area of downstream production operations that are seeing an increase in outsourced operations. These fluids are used widely in bioprocessing to equilibrate pH; condition, wash, and elute columns; and/or concentrate process streams throughout downstream purification. Buffer fluids can constitute a bottleneck in downstream processing, with required volumes that can be 10â€“20Ã— the volume of bioreactors used upstream. Making these fluids in-house requires dedicating space, equipment, and staff to buffer preparation and handling. It also requires regulatory oversight and quality management.

In our 13th annual biopharmaceutical manufacturing survey, we asked 222 bioprocess-professional respondents to indicate which among 21 key activities they are outsourcing actively today (1). We found a significant increase over the past seven years among those companies outsourcing at least some upstream and downstream production, including buffer preparation.

The near doubling of facilities moving some manufacturing work out of house indicates trends that are driving outsourcing of less critical functions such as buffer preparation. In addition to data showing that outsourced operations are generally increasing, we see that budgets for such operations also are increasing. For example, budgets for outsourced biomanufacturing were essentially flat in 2009â€“2010. They have increased annually, including a 3.9% increase from 2014 to 2015 and a 2.4% budget increase in 2016.

Whether buffers are purchased as powders or delivered by suppliers as finished fluids, additional work and costs remain. Dry powders must be mixed and hydrated to create finished buffer fluids. Once a facility has its necessary allotment of fluid buffers, whether made in-house or purchased ready for use, additional tasks (and costs) include staff time, buffer storage, moving large containers and/or piping buffer fluids, heating/cooling, fluid transfer into process streams, quality control (QC) and regulatory-compliance testing, multiple filtration steps, and buffer disposal. Some buffers are classed as hazardous materials and thus require costlier disposal methods.

Total in-House Costs
This year, BioPlan Associates performed a related follow-on study concerning total costs for in-house preparation and use of buffers â€” particularly from powders, which remains the predominant approach. We interviewed a number of bioprocessing professionals who have calculated buffer preparation costs at their facilities and recorded their cost-related data. The goal of this project was to develop a model for estimating total in-house costs of buffer preparation (from powders) as a tool to use in comparing costs of different in-house equipment and processing options for the activity.

We collected 28 different types of cost data related to facility and equipment amortization, fixed and variable costs, and consumables. Approaches to calculating most bioprocessing-related costs vary throughout the industry, so our interviews included discussion of each method and often (re)calculation of costs to arrive at standardized, comparable data.

Table 1 summarizes average annual total costs for in-house buffer preparation (from powders) and use at different scales and within different types of facilities (e.g., single-use, multiuse, and hybrid). As expected, buffer costs per liter decrease as the scale of purchase and preparation increases. Costs within fully stainless steel facilities are lower than those for single-use or hybrid facilities. However, that result may be influenced by the fact that stainless steel facilities considered here tended to be large and perform commercial-scale manufacturing work.

Estimated average buffer costs ranged from nearly $30/L for smaller facilities (those needed <100,000 L of buffers/year) to about $11/L at the largest scales (those needing >1,000,000 L/year). As expected, the total facility costs generally increase as facility size and bioprocessing scale go up, with <100,000-L/year facilities having annual average buffer preparation costs of $2.6 million. Those operating at the largest scales (>1,000,000 L/year) have annual costs averaging in multiple tens of millions of dollars.

From those data, you can see that costs for outsourced purchase of finished buffer fluids tend to be significantly higher than the total costs for in-house buffer preparation and use from source powders. We note that costs associated with preprepared buffer transportation (shipping fluids can be costly) is a major factor in our analysis. However, as more suppliers improve their logistics and shipping, production efficiency and increasing operational scales will reduce costs.

Keep in mind that the costs reported above for outsourced purchases are for delivery of buffer fluids only. They do not include internal costs related to fluid buffer storage, transfer, QC testing, staff time, spill cleanup, regulatory filings preparation, and so on.

Our findings indicate that in-house buffer preparation is (as expected) more cost-effective in large facilities,Â which tend to be all stainless-steel and multiuse equipment â€” or otherwise when buffers are prepared in large quantities in house, particularly at larger commercial manufacturing scales. Costs for in-house buffer preparation using single-use and hybrid equipment generally are higher than when using multiuse equipment (even at the same larger scales with single-use systems).

Benefits and Downsides
But as with many other aspects of bioprocessing, the least expensive way of doing things is not always the best or desired. When other difficult-to-quantify aspects of buffer preparation are also considered â€” e.g., fit with product development timelines and desire/need for flexibility â€” the full actual or perceived costs to a facility can be even higher (or lower) than overall costâ€“benefit calculations. So results might be different from the straight consideration of costs presented herein.

As with comparisons of costs, benefits, and downsides related to single-use and stainless steel facilities, decisions concerning buffers need to be tailored to a given facility, its bioprocessing, corporate culture, preference/tolerance for risk associated with outsourcing or performing work in-house, and so on. Some decision-makers concentrate solely on considering the total quantifiable costs (as we present herein), and those are essentially always lower for in-house buffer preparation. Others view such calculations as too limited because they donâ€™t account for the diverse qualitative advantages gained from outsourcing. Effectively increasing benefits, if not lowering costs, those advantages include smaller facilities (footprint), lower in-house bioprocess and capital costs, shifting preparation responsibilities (including handling QA/QC and regulatory documentation) to someone else, eliminating the need for buffer-dedicated space or preparation staff, and so on.

Costs considered in this study are clearly higher at smaller scales, using disposable equipment, and outsourcingÂ purchase of finished fluids. But the benefits of in-house single-use systems and outsourcing buffer preparation (see the box above) can be compelling for many bioprocessing facilities. Qualitative benefits from outsourcing include letting an expert company deal with preparation, QA/QC, and documentation. Those benefits can easily counterbalance and make outsourced purchase of finished buffers attractive for some or even many facilities. Particularly that would include those operating at smaller scales, performing more intermittent bioprocessing, having facility limitations, optimizing facilities for flexibility, and trying to lower capital investment costs. They also may desire other benefits from outsourcing tasks related to preparation of finished liquid buffers that may well be performed better by the buffer powder manufacturers themselves. Those and other hard-to-quantify benefits are not included in total cost calculations and were not considered in this study. However, when combined with the eliminated tasks and costs, they should make outsourcing of buffer preparation an increasingly viable and cost-beneficial option.