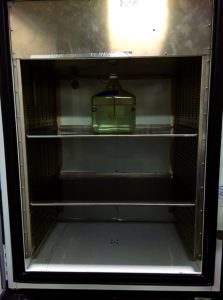 The study reported herein presents a consistent method for controlled-rate freezing and thawing of bottled formulations. It also highlights the effect of load and container position on freeze rates. The freezeâ€“thaw controlled-rate chamber used in this study is a Model 4002 manufactured by Farrar Scientific. It permits rapid, uniform bulk freezing/ thawing of products with temperature ranges from +40 Â°C to â€“80 Â°C. The model has a minimum of 1.7 kW of net cooling and heating capacity over its entire temperature range. Units come equipped with programmable profiles that allow flexibility to meet unique product conditioning. 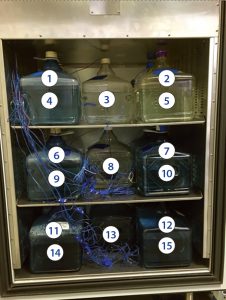 Tap water simulates a water-based biological formulation. It is more stable than a buffered isotonic solution over the course of multiple freezeâ€“thaw cycles, providing for reproducible results. After comparing tap water with buffered solutions, my company has found very good agreement in experimental results and those calculated for buffer solutions based on water experiments. Tap water must meet local quality standards, with contaminants at such a low concentration that associated errors in freezeâ€“thaw results would be less substantial than those from other possible sources. The company has successfully conducted validatable qualification studies with clients using tap water.

This study involves polycarbonate bottles (10-L capacity with 9-L fill). For a one-bottle test, a bottle was placed in the middle of the top shelf in the unit, the objective being to maximize air flow to its entire outer surface as uniformly as possible (Photo 1). The bottle held 9 L of tap water and had a thermocouple placedÂ through the middle of its closure, with the tip located halfway between the bottom and top surfaces of the contents. The end of the thermocouple also was equidistant from all bottle sides (located in the geometric center). That is the expected last point to freeze if thermal energy is removed from the entire liquid surface at the same rate.

Our validation team established freezing cooling-rate maximums for small and large loads before determining the freezing requirements. Thus, the controlled-rate chamber was set up according to the program described in the â€śTest 1â€ť box. 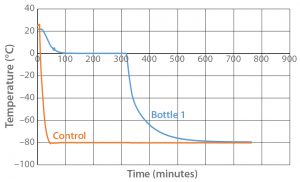 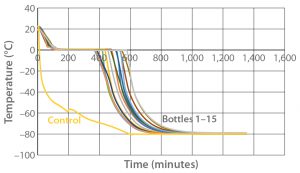 Test 2 conducted with the same temperature profile used 15 bottles arranged to maximize air flow to all their surfaces as uniformly as possible (Photo 2). Figure 2 and Tables 2 and 3 show the freezing and cooling rates for this test. The time it took for every bottle to change phase (freeze time) ranged from 369 minutes to 544 minutes. Cooling rates from â€“5 Â°C to â€“30 Â°C ranged from 0.3 Â°C/min to 1.6 Â°C/min. 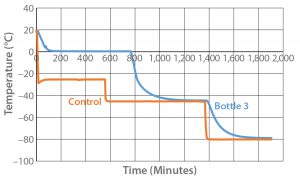 Because both the small-load (one bottle) and large-load (15 bottles) tests showed cooling rates faster than our target, we designed and conducted TestÂ 3 (one 9-L bottle) with an adjusted temperature profile as described in the â€śTest 3â€ť box. Figure 3 and Table 4 show the resulting cooling rates. The time for the product to fully change phase (767 minutes) fell within the desired time range. Cooling rates from â€“5Â Â°C to â€“30 Â°C also fell within the desired range. 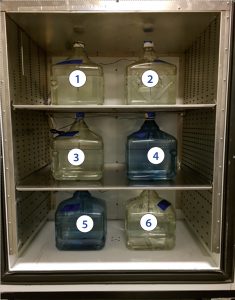 Because the correct temperature profile had been determined with one bottle, Test 4 used that same temperatureÂ profile with six bottles. For this six-bottle test, bottles were arranged side by side on each shelf as Photo 3 shows. Figure 4 and Table 5 give the cooling rates for each bottle. The six bottles fully changed phase in 779â€“922 minutes. The single bottle (TestÂ 3) fully changed phase at 767 minutes, within 12 minutes of the six-bottle temperature range. Additionally, all six bottlesâ€™ cooling rates from â€“5 Â°C to â€“30 Â°C fell in the desired range, just as the single bottle in Test 3 had done. These results show that freezing and cooling rates are independent of product load or bottle position. 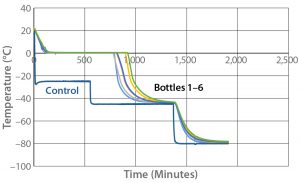 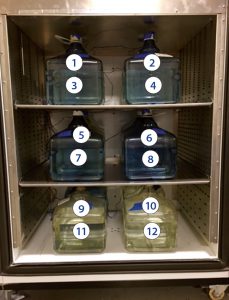 With the correct temperature profile determined with both one bottle and six bottles, Test 5 used the same temperature profile with 12 bottles. For this 12-bottle test, we arranged the bottles as Photo 4 shows. Figure 5 and Table 6 give the cooling rates for each bottle. All 12 bottles fully changed phase in 769â€“977 minutes. That range encompasses the six-bottle range and is within two minutes of the one-bottle test, again showing that freezing rate is independent of product load. Additionally, all 12 bottle cooling rates from â€“5 Â°C to â€“30 Â°C fell into theÂ desired range just like the six-bottle and one-bottle tests. These results indicate that the cooling rate does not depend on bottle position in the chamber or the number of bottles loaded. 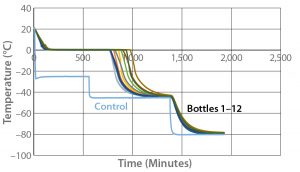 All the odd numbered bottles (those positioned on the left side of the chamber) fully changed phase in less time than the even numbered bottles positioned beside them. This is to be expected because air flow enters the chamber from its top left corner, then flows down and out of a duct toward the right side.

Bottle 4 showed the fastest cooling rate from â€“5 Â°C to â€“30 Â°C. That was also expected because the other three bottles on the top shelf were â‰¤ â€“20 Â°C when bottle 4 fully changed phase. Bottle 9 had the slowest cooling rate from â€“5 Â°C to â€“30Â Â°C, and Bottle 10 was the last to fully change phase. Those results were again expected because the bottom floor ofÂ the cabinet has the least amount of air flow in contact with the bottles.

Results and Discussion: Thawing
Fast thaw rates are best for preventing damage to biological formulations (2). However, most biological formulations are temperature sensitive. Therefore, this study shows how the maximum product temperature could be controlled as well as thaw rate. The thaw test temperature profile starts with product at â€“80 Â°C and ramps to +20 Â°C as fast as possible. For the purpose of this study, the time it took for each bottle to reach to +2 Â°C is recorded as its thaw time. 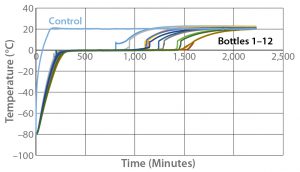 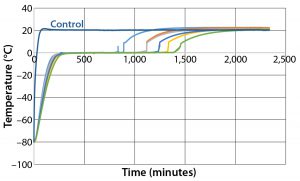 To test load effects, thaw Test 7 was designed and conducted with the same conditions using six bottles (Figure 7).Â Those six bottles reached +2 Â°C in the range of 892 minutes (Bottle 1) to 1,412 minutes (Bottle 6), within the range of the 12 bottles in Test 6. Thus, thaw rates are as independent of load as are freezing rates. Again, the odd- and even-numbered bottle thaw rates were controlled independently of bottle position in the chamber. 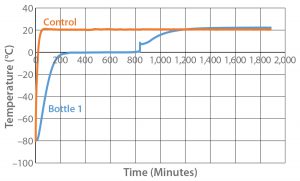 To further test the effect of load, thaw Test 8 was designed and conducted with the same conditions used with one bottle (Figure 8). The bottle reached +2 Â°C in 836 minutes, which is within the range of all 12 bottles in Test 6. This further indicates that thaw rate was controlled independent of load.

A Validated Method
We successfully developed a method to control the desired freezing and thawing rate of biological formulations using modern equipment. It was validated with different loads (one, six, and 12 bottles) and bottle positions in the unit chamber. My company has developed a program that clients can use to reliably and uniformly bulk freeze and thaw their own biological formulations.

3 Radmanovic N, et al. Understanding the Freezing of Biopharmaceuticals: First-Principle Modeling of the Process and Evaluation of Its Effect on Product Quality. J. Pharma. Sci. 102(8) 2013: 2495â€“2507.