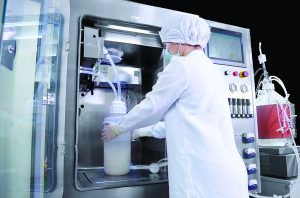 Upstream Production
The exhibit floor had only a few booths from bioreactor suppliers, and most were familiar systems in single-use design and pilot and laboratory scales. Newer systems offered improved integration with software platforms and an increase in sensor monitoring. And there was a notable increase from last year in the number of services providers offering production of cell and gene therapies.

Bioreactor Systems: Esco Aster has developed a platform for producing adherent bone-marrowâ€“derived and adipose-derived stem cells for allogeneic cell therapies. At the conference, the company showed its TideXcell 2-L bioreactor system, which includes a control and incubation unit that contains a matrix vessel with the companyâ€™s BioNOC II carriers. This system contains a matrix vessel and TideXcell mixing unit for holding mixing bags or vessels of culture media. The platform can be connected to the companyâ€™s harvest and feed tanks for perfusion and continuous culture (Photo 1 and on the cover).

During the week before the conference, ABEC announced that it had increased the volume of its single-use custom single run (CSR) bioreactor to 6,000 L. President and CEO Scott Pickering said, â€śIn applications where single-use systems are preferred, . . . customers can now achieve even greater economies of scale.â€ť

Rapid Sequencing: Highlighted during a conference presentation, the MinION portable device by Oxford NanoPore Technologies enables rapid DNA and RNA sequencing. Each flow cell generates up to 30 Gb of DNA sequence data or 7â€“12 million reads of RNA. The device streams data in real time and can be plugged into a PC or laptop.

Bioprinting: Adam Feinberg from Carnegie Mellon University presented on scaffold fabrication using three-dimensional bioprinting. His team has developed Freeform Reversible Embedding of Suspended Hydrogels (FRESH) technology to build gel-like scaffolds. Using seeded cells on those scaffolds, the researchers can produce soft-cell encapsulated materials and tissues such as in coronary arteries and other functional parts of a heart. When the printing process is finished, the hydrogel scaffold can be washed away.

Tissue Development: During a preconference symposium, Stuart Jacobson of the Advanced Regenerative Medicine Institute (ARMI) and DEKA Integrated System Corp presented the ARMI BioFab USA Tissue Foundry Integration pilot-project integrated process for developing tissues. The design is a closed, modular system with single-use components and includes programmable logic controllers, automated control, process monitoring, and data logging. The system so far comprises four modules: Module 0 consists of five cryovials in which cells are thawed automatically, then extracted. Module 1 is cell culture, using up to four vessels and with control of vital parameters such as pH, dissolved oxygen, temperature as well as monitoring of agitation and cell count.

Module 2 performs cell harvest and wash. Different module options for cell processing are under consideration. Module 3 enables tissue assembly and maturation. The systemâ€™s development is an ongoing collaboration project with biopharmaceutical researchers and manufacturers. Jacobson said that the long-term goal is to develop a Foundry 1.0 system as the first step toward an integrated, automated, closed, turn-key system for manufacturing tissue-engineered medical products (TEMPs).

Downstream Processing and Filling
This year, the exhibition focused primarily on streamlining downstream processes. A few suppliers offered systems to eliminate and/or replace bottleneck problems at the centrifugation and depth filtration steps. Newer downstream technologies also have been designed with small footprints and to incorporate more automation and disposable components than before. 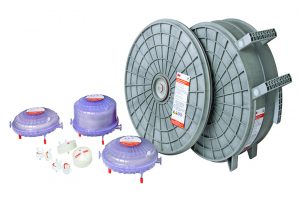 Chromatography: Sartorius Stedim Biotech presented several technologies at its booth. Among them were a â€śPAT readyâ€ť single-use Biostat STR stirred-tank bioreactor and a rapid cycling chromatography (RCC) system for monoclonal antibody capture. The bioreactor is fully scalable and can be used for high-density, microcarrier, and perfusion applications. The system is designed for use with the companyâ€™s single-use bags (Flexsafe STR), which include single-use sensors for measuring multiple parameters. The RCC system is designed to reduce time to market by enabling high productivity. It comprises the â€śconvecdiffâ€ť membrane, a range of scalable devices, and a supporting skid.

JSR Life Sciences presented its Amsphere A3 protein A chromatography resin and Chromasette chromatography platform. The resin consists of a highly cross-lined bead structure to provide high dynamic binding capacity (DBC) at high flow rates. The company reports that DBC to be 50% higher than DBCs of market-standard resins at two- to six-minute residence times. In 2016 the company acquired the Chromasette technology from SPF Technologies. Representing the first modular chromatography platform, Chromasette devices have stackable, disposable cassettes for scale-up. Each cassette has an internal scaffold that supports resin beads to reduce resin compression.

Prometic featured Evolve bioprocess columns for pilot and commercial-scale chromatography. The columns come with a kit, which contains tools, connections, and spare accessories for â€śready-to-useâ€ť implementation. The columns have a unique â€śsemidisposableâ€ť design that enables operators to change out all wetted parts and use â€śrefresh kits.â€ť

Xavier de Mollerat du Jeu, director of product management of cell biology at Thermo Fisher Scientific, presented his talk on bridging the gap from development to commercial production. He introduced the audience to his companyâ€™s Rotea counterflow centrifugation instrument. Scheduled for availability in 2020, the technology is a closed cell-processing system for cell therapy manufacturing. Offering high recovery, the system is designed to process up to 20 L of starting volume continuously and deliver concentrate volumes as small as 5-mL output with up to 200 million cells/mL. A single-use kit enables scale-up from research to commercial scale. 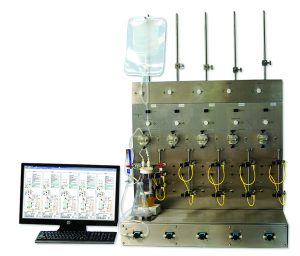 Filtration: PendoTECH featured a five-station tangential-flow filtration (TFF) screening system (Photo 3) and sensors (page 10). The TFF system enables users to perform parallel experiments and interact with the system through a PC-based graphics user interface (GUI). Six built-in programmable recipes can be used for batch control. Pressure sensors can be cleaned and reused, and the companyâ€™s throttle valve controls back pressure.

Buffer Delivery: MilliporeSigma featured its Biocontinuum buffer delivery platform as a step toward enabling continuous and intensified biomanufacturing. It is a configurable, connected system comprising buffer concentrates, buffer dilution, and single-use assemblies for buffer preparation and management of large volumes of buffers. The platform is designed to eliminate the need for manual buffer preparation. 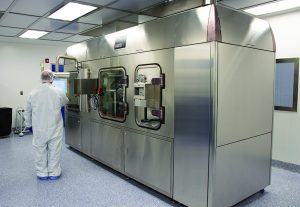 Robotic Filling System: A Vanrx SA25 workcell is a closed, aseptic, robotic filling and handling machine. Photo 5 shows such a system in use at Singota Solutions, a contract development and manufacturing organization (CDMO) that built its first aseptic filling capacity for vials, syringes, and cartridges on the filling machine. At the conference, senior marketing manager Eric Petz told me, â€śThe key attribute leading to speed to market is a standard design that allows construction, qualification and validations to happen in shorter time frames than is typical in the industry. Over the past two years, customers have averaged 7.5 months from purchase order to factory acceptance test (FAT) and 1.75 months from FAT to the completion of a site acceptance test (SAT), including shipping time.â€ť

Beckman Coulter presented its Biomek i5 automated workstation for liquid handling. The system (and the i7 version, not shown at the conference) has an open platform with a grid-based deck and performs multichannel pipetting tasks in 0.5â€“5,000 ÎĽL volumes. The instrument includes process management and scheduling software for â€śwalk-awayâ€ť operation. Other models demonstrated at the conference were the companyâ€™s ViCell Blu and Metathex liquid-handling systems.

Some conference presenters described the capabilities of the digital polymerase chain reaction (dPCR) technology, a more precise method than traditional PCR. At the exhibit, Bio-Rad featured its Droplet Digital PCR (ddPCR) system, which performs dPCR based on waterâ€“oil droplets. The droplets separate template DNA molecules and serve the same function as individual tubes or wells in a plate in which PCR reactions traditionally take place.

Securecell presented its Numera automated sampling system for online analytics. The instrument automatically draws biomass-containing samples from bioreactors and then processes, stores, and automatically transfers those samples to directly coupled analytical devices. The company also featured its Lucullus process information management system (PIMS) for use with the Numera system. 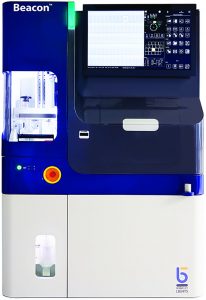 Some conference presenters discussed their companiesâ€™ use of the Beacon optofluidic platform from Berkeley Lights (Photo 6). This digital cell analysis system processes thousands of cells rapidly for applications such as cell selection, gene editing, and antibody discovery. OptoSelect chips move cells in parallel while they are cultured, assayed, and measured. Integrated software captures and displays results, which also can be shown as digital graphics.

In his conference presentation, Synthace chief scientific officer Markus Gershater introduced â€ścomputer-aided biologyâ€ť and the need to â€śconnect the digital world with the physical world, powered by artificial intelligence (AI) and automation.â€ť The companyâ€™s Antha laboratory software platform links laboratory automated systems to data integration by controlling and coordinating multiple laboratory devices. â€śTypical laboratory analysis planning takes a lot of time,â€ť he said. â€śWe developed software tools to help carry out laboratory automation and flexibly perform a large range of protocols. If you need to change parameters, the system automatically reprograms those protocols for you. For example, if you want to increase the number of dilution steps, the software allows you to do that easily and will make changes along your entire experiment.â€ť

Show Us Your Technology
The BPI conference exhibition included many more technologies that could not be mentioned because of space limitations here. Most suppliers are designing their systems to fit the need to reduce time to market by implementing automated, single-use, integrated, and closed systems. Additional technologies are presented in the following pages. If your companyâ€™s technology isnâ€™t listed in this report, please send me an invitation to stop by your booth during next yearâ€™s conference â€” or better, let BPI editors know that youâ€™d like to work with us in publishing your content.