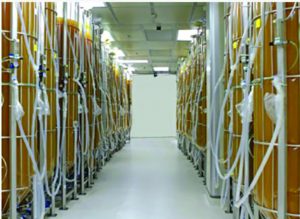 Cell cultures derived from mammalian and bacterial cell lines are the conventional production systems in bioprocessing. But they also have their limitations. Media for mammalian cultures in particular are notoriously expensive, and traditional cell cultures can be highly sensitive to growing conditions. During the late 1980s and into the 1990s, plants and plant-derived cell cultures were introduced as alternative cell-culture systems (1, 2). Although transgenic plants (genetically modified) once looked promising in the early 2000s, the cost and manufacturing complexity of such systems were hurdles that proved to be too high to negotiate, so research in transgenic plants faded. Nonetheless, progress had been made in using plant cell cultures for producing antibodies and proteins (3). In the past 10 years, plant cells increasingly have been considered as cost-effective expression systems for recombinant and animal-free proteins, emergency vaccines, immunotherapies, and other products that could benefit from plant glycans (4). Extensive research has focused on the optimization of protein expression, particularly addressing internal factors such as expression cassettes, protein targeting, and coexpression of protease inhibitors as well as nutritional and physical cultivation parameters affecting plant growth and fitness (4, 5).

Advantages of Using Plant-Cell Culture
Why did Protalix choose to pursue plant-cell expression over mammalian-cell systems? Protalix selected plant cells as a potential platform to express recombinant proteins during the early 1990s. Our goal was to introduce a novel production platform into the emerging industry for producing recombinant human proteins as biotherapeutics. At that time, the main production platforms for protein expression were microbial and mammalian cells. Bacterial cells lack the essential ability to perform complex posttranslational modifications such as glycosylation, disulfide bond, and correct folding, which are required for many biotherapeutics proteins to be functional. At that time, mammalian cells that could produce complex proteins required a set of relatively complicated and expensive growing conditions such as complex media enriched with animal-derived components. Those systems also required highly controlled environmental conditions with narrow operating ranges.

Plant cells are a promising production platform because they can make complex proteins with posttranslational modifications, and they are simple and cost effective to culture. Plant cells are relatively easy to culture in vitro, and they are tolerant to a wide range of environmental conditions. They also grow nicely at room temperature without the need for supplementing cultures with CO2 or other gas. Their growing media are composed of simple minerals and sugar, and no complex animal-derived components are required (a regulatory advantage). Plant-cell systems are not susceptible to viral contamination in production, which can ensure continuous and reliable supply.

What plant species are proving to be most useful and/or successful for gene expression? Cells from many plant species (e.g., carrot, tomato, rice, arabidopsis, and tobacco) can be used to express active and properly folded complex human proteins. For a useful and successful production platform, you would select cells that grow vigorously in culture (with a high doubling time) and create relatively ŌĆ£smoothŌĆØ suspension (some plant cells tend to aggregate in culture). The ideal choice also should be amenable to genetic manipulations.

After we produced out first approved product in carrot cells, we selected tobacco BY2 (Nicotiana tabacum bright yellow 2) cells as our preferred production host. BY2 cells are fast growing in culture and are easy to transform genetically with different expression systems, including replicons from plant viruses. In the world of plant cells, BY2 cells are a workhorse, very much like Chinese hamster ovary (CHO) cells are for mammalian-cell platforms. BY2 cells have been used for the past 50 years in laboratories around the world for both basic and applied research in plant-cell biology. Thus, they are highly characterized.

Screening and Analysis
How does clone screening compare between plant and mammalian cells, and what attributes should upstream scientists be mindful about when screening plant-cell clones? The main factors that should be considered when cloning plant cells are their tendency to grow in small clumps and their reluctance to survive and propagate while not surrounded (or accompanied) by other cells (e.g., ŌĆ£socialŌĆØ cells). Although mammalian cells can be counted and diluted to Ōēż1 cell/well easily and precisely to ensure single-cell culture, this approach is not straightforward with plant cells. To circumvent those limitations, cell clumps can be separated enzymatically into single cells or protoplasts and cloned with the application of a feeder-culture. This approach uses either a cell-free conditioned medium or nontransformed cells (that eventually will not survive the antibiotic-supplemented medium) as a supporting feeder. Similar to cloning mammalian cells, the process of cloning should be repeated more than once (subcloning) to verify clonality of the selected cell lines.

What can upstream scientists do to ensure and even augment cell viability? Biomanufacturers should provide and control proper growing conditions in terms of culture-medium composition, ambient temperature, proper agitation, and frequent subculturing. Viability through upstream production is ensured by implementing in-process control measures. That includes measuring cell concentrations and some medium properties at various control points, ensuring that process results comply with preset specifications.

What analytical tests are most important for plant-cellŌĆōexpressed proteins? Characterization and quality control release tests for plant-cellŌĆōexpressed proteins are no different than for proteins produced with other cell systems. A protein needs to be safe, efficacious, and consistent from batch to batch. Thus, as with proteins from other production systems, all in-process controls (IPCs) and all critical quality attributes (CQAs) are measured.

Addressing Regulatory Concerns
What regulatory concerns are unique to proteins produced using plant-based systems? Like other eukaryotic organisms, plants produce glycoproteins with N-glycans attached to asparagine residues, although the glycans differ in structure from those of mammals. Plant glycans can contain an ╬▒(1,3)-fucose linked to the proximal N-acetylglucosamine (GlcNAc) residue and/or ╬▓(1,2)-xylose residues attached to the bisecting mannose of the glycan core, which are not present in mammalian proteins. The immunogenic effect of plant glycan moieties has been the basis of much debate.

What regulatory concerns related to proteins produced by mammalian cells can be bypassed by using plant-cell systems? Plant-cell systems intrinsically do not carry the risk of infection by or transmission of human or other animal pathogens. Because the culture media used with plant cells lack mammalian-derived components, the risk of transmission of mammalian viruses or prions associated with use of such components in mammalian-cell culture media is eliminated. Moreover, mammalian viruses cannot infect nor propagate in plant-cell cultures. These factors are not only important to safety, but they also reduce operational costs significantly compared with mammalian expression systems. That has been recognized by all regulatory agencies. Thus, Protalix is exempt from testing for viruses.

Plant-Cell Expression Platform
What can you tell us about Elelyso (taliglucerase alfa) and the ProCellEx platform used to manufacture it? Elelyso (taliglucerase alfa) is a recombinant human ╬▓-glucocerebrosidase that is used as an enzyme replacement therapy (ERT) and is approved as a parenteral treatment for Gaucher patients. The Protalix ProCellEx platform is a proprietary bioreactor system consisting of large flexible polyethylene bags into which culture medium and air from a central system are supplied under sterile conditions. That central air supply also serves as an agitation method for suspended cells, reducing mechanical forces that otherwise could harm the cells. In this system, bioreactors are assembled serially within a confined cleanroom facility. That enables the culture of thousands of liters of transformed plant cells that are expressing a recombinant protein of interest at an industrial scale and at economical costs.

The system allows for horizontal scale out (by adding more bioreactors of the same size). That translates into two substantial advantages: a smooth transition from pilot to commercial scale with little need for making adjustments for comparability of the upstream processes; and a flexible production that quickly and cost-effectively reacts to fluctuations in the market. The protein yields achieved from our second product are about 20-fold compared with that of our first product. We expect future products to reach even higher yields.