Peptides should be promising drug candidates. But their small size makes delivery difficult and gives them an extremely short in vivo half-life. They are often cleared by the kidneys or reticuloendothelial system only minutes after being administered, and they are susceptible to degradation by proteolytic enzymes. These problems could be solved by linking them to polyethylene glycol (PEG).

Repeating chains of ethylene oxide (CH2CH2O), PEG molecules can be long or short and straight or branched. PEG groups are linked to a reactive group on a peptide molecule, usually lysine (can also be aspartic acid, glutamic acid, free cysteine, serine, threonine, the N-terminal amine, or the C-terminal carboxylic acid). Once linked to a peptide, each ethylene glycol subunit becomes tightly associated with two or three water molecules. This has the dual function of rendering the peptide more soluble in water and increasing its size. Kidneys filter substances according to their size, so adding PEG’s molecular weight alleviates the renal clearance undergone by small peptides. PEG’s globular structure also acts as a shield to protect them from proteolytic degradation, and it reduces the immunogenicity of foreign peptides by reducing their uptake by dendritic cells.

PEG itself is neither immunogenic nor toxic. By increasing the circulating half-life of peptide drugs (sometimes by 100Ă—), PEGylation allows lower doses to be used with less frequent administrations. This saves money and resources, promotes patient compliance, and reduces toxicity and allergic reactions. In addition to improving the in vivo pharmacokinetic and pharmacodynamic properties of peptide drugs, PEGylation can also aid in drug delivery. 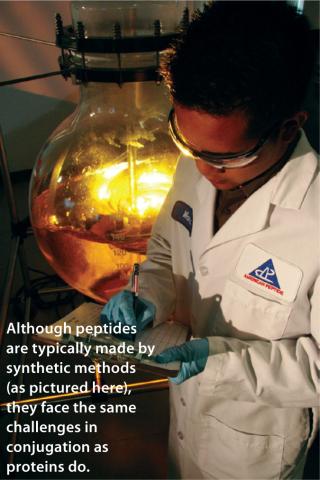 In March 1990, FDA approved the first PEGylated drug: Adagen bovine adenosine deaminase, also the first successful enzyme replacement therapy for an inherited disease (5). It is used to treat people with X-linked severe combined immunodeficiency disease (SCID) and is marketed by Enzon Pharmaceuticals. That company was founded in the 1970s by Abraham Abuchowski for the stated purpose of bringing PEGylated drugs to market.

Another drug using Enzon’s proprietary PEG platform is Oncaspar PEGylated L-asparaginase (5), the enzyme that degrades the amino acid asparagine. By contrast with normal cells, leukemic cells cannot produce asparagine on their own and so must get it from food. This drug is given to people with leukemia to kill those cells by starving them of that nutrient. PEGylation extends the enzyme’s half-life from 20 to 357 hours and reduces adverse immune reactions.

Amgen’s Neulasta pegfilgrastim is a drug currently being used to fight chemotherapy-induced neutropenia in cancer patients (5). It is a PEGylated form of recombinant granulocyte colony-stimulating factor, a cytokine that stimulates the survival of neutrophils, which are vital to fighting infection but are unfortunately destroyed by chemotherapy. Pegfilgrastim requires only one injection per chemotherapy trial, whereas the original drug (filgrastim) had to be injected daily for two weeks.

A recent trend in cancer therapeutics focuses on metastases and the angiogenesis that enables their occurrence. The urokinase-mediated plasminogen activation system plays a central role in breaking down the extracellular matrix, so inhibiting it might be a valuable anticancer strategy. Although an inhibitor known as DX-1000 was identified using phage display, it was cleared too rapidly by the kidneys because of its low molecular weight. Site-specific PEGylation, however, enhanced its in vivo stability and slowed clearance but did not significantly diminish its antiangiogenic capabilities (2).

Sometimes lysine residues are in an inaccessible region of a peptide or in its active/binding site. In such cases, site-directed mutagenesis can engineer free cysteine residues into a better place to link with PEG. This approach was used successfully to PEGylate recombinant granulocyte-macrophage colony stimulating factor (GM-CSF), a cytokine that is used clinically to treat melanoma, Crohn’s disease, and myeloid and hematopoietic disorders, including neutropenia (3). Because of its short circulating half-life, GM-CSF must be injected daily. PEGylation increased its half-life from only one to 22 hours.

A number of other PEGylated peptides are in development for a range of maladies. Somavert PEGylated human growth hormone antagonist is marketed by Pfizer to treat acromegaly, a rare hormonal disease in which excessive insulin-like growth factor-1 causes soft-tissue enlargement (5). Researchers at Bayer Healthcare Pharmaceuticals have developed a reproducible method for PEGylating a peptide they hope to use to treat type 2 diabetes (8). Branched PEGs have been linked to lysostaphin, an antibacterial endopeptidase that can be used to fight multidrug-resistant strains of Staphylococcus aureus and increase its serum half-life from less than an hour to a full day. PEGylation has also reduced the generation of antibodies against lysostaphin (9).

PEGylation can make drugs more effective by granting them more time in a patient’s body to work. It can also help deliver these drugs more efficiently. Intranasal delivery is an attractive route for administering biologically active peptides, for example. Scientists at MDRNA, Inc. (formerly Nastech Pharmaceutical Company Inc.) demonstrated that PEGylated peptides can be permeation enhancers for nasal drug delivery. Furthermore, synthetic PEGylated glycoproteins have been used in lieu of viruses for targeted gene delivery (1). Genes delivered this way were expressed in vivo.

Peptides can also help PEG work. It has been shown to act as a cell repellant, preventing mammalian and bacterial cell growth on medical implants made of plastic or metal. But grafting it to such materials is a challenge. Linking PEG to a hydrophilic molecule has created a coating on polystyrene that reduced the attachment of both human umbilical vein endothelial cells and S. aureus (6). Other PEGylated peptides had affinities for implant materials such as titanium. These cytophobic coatings may find other uses, e.g., in proteomic studies and cell culture technologies.

Sometimes PEGylation can decrease the binding affinity or activity of a peptide or protein. In all cases, however, the extended half life has more than compensated for this effect. The slight increase in manufacturing cost incurred by PEGylation will certainly be deemed worthwhile.

7.) Shepherd, J. 2004. Pegylated Interferon Alpha-2a and -2b in Combination with Ribavirin in the Treatment of Chronic Hepatitis C: A Systematic Review and Economic Evaluation. Health Technol. Assess. 1â€“125 8:iii-iv.