Protein and peptide therapeutics may undergo numerous physical and chemical changes during manufacturing, shipping, storage, and administration that can adversely alter drug potency and safety. Earlier concerns focused upon denaturation (unfolding), oxidation, and deamidation of certain key aminoacyl residues. Recently, aggregation has emerged as a key issue underlying multiple deleterious effects for peptide- or protein-based therapeutics, including loss of efficacy, altered pharmacokinetics, reduced stability and product shelf life, and induction of unwanted immunogenicity. As a result, the US FDA and the EMEA have increased their scrutiny of peptide aggregation — and in response, biopharmaceutical companies have increased their efforts to understand and control this phenomenon. A number of excipients have been used to reduce aggregation with limited practical success. Recently, a group of them developed initially to increase transmucosal absorption of peptide and protein drugs (ProTek alkylsaccharide excipients) were found to be useful in dramatically increasing the solution stability of a number of high-value protein therapeutics.

Aggregation, which includes formation of dimers and higher-order aggregates, may be mediated by seemingly innocuous solution formulation conditions such as pH, ionic strength, concentration, counter-ion composition, and even the addition of certain antimicrobial preservatives (1). Aggregation can dramatically affect the subcutaneous bioavailability and pharmacokinetics of a therapeutic peptide, and in the extreme it can totally preclude drug absorption (2). In addition to bioavailability, the pharmacokinetics of self-associating peptides can be influenced by aggregate size and the ease or difficulty of disruption of noncovalent intermolecular interactions at an injection site. 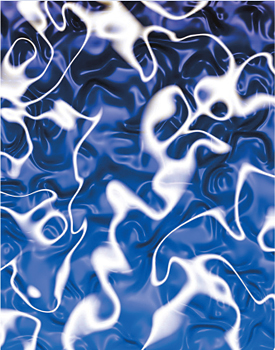 The biomanufacturing process itself can cause protein aggregation. During manufacturing, proteins are purified and concentrated using a variety of means such as ultrafiltration, affinity chromatography, selective absorption chromatography, ion-exchange chromatography, lyophilization, dialysis, and precipitation or “salting out.” Such concentration processes can lead to aggregation, which in turn can increase the immunogenicity of a protein therapeutic.

Proven Product Effects: Over the past five years, the FDA and other regulatory agencies have increased their concern over the induction of unwanted immunogenicity. Immunogenicity of self-associating peptides has been linked to the formation of aggregates arising from noncovalent intermolecular interactions. In some instances, aggregation can be a serious (even life threatening) issue. Development of antibodies to erythropoietin (EPO) has been shown to produce a condition called “pure red-cell aplasia,” a life-threatening side effect of EPO therapy, in a number of patients receiving the recombinant product (4). Similarly, interferon beta has been shown to aggregate and cause an antibody response (5). Multiple sclerosis patients who exhibit high levels of neutralizing antibodies to interferon beta have a higher relapse rate and more disease activity as measured by brain magnetic resonance imaging (MRI) (6).

Insulin is well known to lose activity as a result of protein aggregation upon agitation at temperatures above those found during refrigerated storage (7, 8). This may limit its shelf life and make storage and transport less convenient and more expensive. However, even though patients typically develop antibodies to injected insulin, those antiinsulin antibodies are not neutralizing, so the antibody response appears to be completely benign.

As an important and growing class of protein therapeutics, monoclonal antibodies (MAbs) have also been shown to be subject to inactivation as a result of protein aggregation (9). The number of MAbs in human clinical trials has been on the rise. Often they require relatively high dosing (in the 1-2 mg/kg range) whether administered intravenously in a hospital or in an outpatient setting by a more convenient mode of delivery such as subcutaneous injection.

Native human amylin is another important protein therapeutic that is subject to severe aggregation. Amylin is a 37-amino-acid peptide hormone secreted by the pancreas at the same time as insulin and is a member of a family of related peptides that includes calcitonin gene-related peptide (CGRP) and calcitonin itself. Amylin has been isolated, purified, and chemically characterized as the major component of amyloid deposits in the islets of pancreases of human type II diabetics, an indication of its aggregation propensity.

Physiologically, amylin slows gastric emptying and suppresses food intake, so it is an effective adjuvant in treating both diabetes and obesity.

As a result of its tendency to form fibrils in solution, the native form of amylin exhibits low solubility and stability characteristics, thereby decreasing the protein’s suitability and effective use as a therapeutic (10, 11). Various modified synthetic analogs of human amylin have been made in an attempt to increase the solubility and stability of the resulting peptides. For example, pramlintide acetate is a synthetic analog of human-amylin-containing proline substitutions at three positions in the native sequence. Although the propensity to aggregate is reduced, pramlintide is significantly less potent than native human amylin. It is generally accepted that sequence-modified analogs of native proteins exhibit increased immunogenicity over the native protein, resulting in unwanted side-effects. Accordingly, a stabilized nonaggregating form of native amylin would exhibit more activity, less aggregation, and less immunogenicity than amylin analogs.

Recombinant human Factor VIII, a multidomain glycoprotein used in replacement therapy for treatment of hemophilia A, is also subject to significant aggregation believed to enhance the antibody-development response (12). About 15-30% of treated patients develop inhibitory antibodies.

Used to treat acute massive pulmonary emboli, urokinase is another life-saving protein therapeutic subject to aggregation and loss of biological activity. Its thermal inactivation has been shown to occur through an aggregation process (13).

Lyophilization is generally regarded as an effective means to stabilize proteins, not just MAb therapeutics as previously mentioned, but many other classes of protein drugs as well. And whereas oxidation, thermal denaturation, and other types of instability may be prevented by lyophilization, aggregate formation and precipitation upon reconstitution of freeze-dried products is a frequently encountered problem for many protein formulations (14).

Approaches to the Problem

One approach to reducing aggregation is to work with protein solutions at lower concentrations and correspondingly larger volumes. However, working with larger volumes naturally introduces inefficiencies into a manufacturing process. During fill–finish operations, concentrated protein solutions may be “squeezed” through piston or peristaltic pumps, a process that imparts shear and mechanical stresses causing denaturation and aggregation. A number of excipients have been used with varying success to reduce protein aggregation; however, each has its own limitations, and the more effective ones are less amenable to inclusion in final formulations.

One such agent, trifluoroethanol (TFE), acts by stabilizing the native structure of alpha helices in proteins. It is among the most effective aggregation prevention agents, but TFE and its metabolite trifluoroacetate are highly toxic and not at all suitable for inclusion in drug formulations (15, 16). In some cases, a combination of alcohols or other organic solvents may be used as a liquid medium for preventing aggregation. Unfortunately, such agents may be harsh on mucosal tissue, causing patient discomfort and/or local toxicity.

Recently, a new class of patented nontoxic alkylsaccharide excipients was originally developed to dramatically increase transmucosal absorption of protein and peptide drugs of up to about 30 kDa molecular weight (17, 18). These have been discovered to dramatically stabilize peptides and proteins against aggregation as well. Designated ProTek excipients, these alkylsaccharides maintain the physical stability and physiological activity of many protein and peptide therapeutics. Composed of a simple disaccharide (e.g., maltose or sucrose) coupled to a long-chain fatty acid or corresponding long-chain alcohol, they metabolize to CO2 and water and are considered GRAS substances, “generally recognized as safe” by regulatory authorities. Because they are completely water soluble, they allow the generation of easily manufacturable homogeneous and stable aqueous or lyophilized dosage formulations of peptide and protein drugs and are compatible with all modes of administration including injection, continuous subcutaneous infusion, intranasal, pulmonary, oral, buccal, and other transmucosal routes. Figure 123 show examples of the dramatic stabilization of some currently marketed protein therapeutics formulated with low concentrations of ProTek excipients.

Figure 1 illustrates stabilization of recombinant human insulin (Humulin brand from Eli Lilly) by two different types of alkylsaccharides (an ester and a glycoside) at various concentrations. In each case, the proteins were subjected to accelerated stress by continuous shaking at 150 RPM at 37 °C for =20 days. The untreated product is seen to begin denaturing after about a day of constant agitation, as measured by increased light scatter (a nondestructive technique routinely used to examine or characterize the aggregation state and solution properties of macromolecules). By contrast, both types of ProTek excipients at all concentrations tested prevented denaturation for the full 20-day period of the study.

In Figure 2, a ProTek alkylsaccharide and its corresponding non-ProTek alkylsaccharide isomer (both examined at two different concentrations) are seen to behave very differently. The non-ProTek isomer does provide some protection for a short period, but it begins to fail between two and three weeks. By contrast, the ProTek excipient at both 0.1% and 0.2% concentrations protected insulin from denaturation for the full 90-day period of continuous agitation at 37 °C. The ProTek excipient similarly increased the stability of human growth hormone in a 20-day study (Figure 3). Independent tests of the excipient with a novel peptidic octamer CCR5 inhibitor prone to rapid and severe aggregation have demonstrated similar results (19).

As mentioned above, key factors in selecting excipients to prevent aggregation are their safety and toxicological properties. ProTek excipients are pure single-chemical-entity alkylsaccharides prepared under GMP conditions. Although the mode of coupling the sugar moiety to the long-chain fatty acid or alcohol may include a range of chemical bonds, esters and glycosides are preferred because the resulting molecules contain no hetero atoms and therefore metabolize to CO2 and H2O.

One structural family of ProTek molecules (ProTek Type A excipients) are members of a larger family called long-chain alkylpolyglucosides. Table 1 overviews the toxicology findings for these molecules (20, 21). Included among them are certain excipients that simultaneously, dramatically, and reversibly increase intranasal, oral, buccal, and other types of transmucosal absorption of proteins and peptides. Thus, a single excipient has allowed demonstration of room-temperature-stable intranasal insulin with a bioavailability roughly 1.5-2.0× that of pulmonary insulins previously in development, allowing a convenient dosage form that is quickly absorbed and completely avoids lung exposure. Figure 4 shows the absorption enhancement effect of a ProTek Type A excipient on intranasal absorption of human insulin in a primate model (a diabetic African Green monkey) compared with a human-insulin control without the excipient.

Table 1: Safety and toxicity data for ProTek Type A alkylsaccharide

A new class of alkylsaccharide excipients originally intended to dramatically enhance transmucosal absorption of peptide and protein drugs was found to be highly effective in preventing protein aggregation. These alkylsaccharide excipients stabilize and reduce aggregation of peptides or proteins in therapeutically useful formulations, and they may provide solutions for aggregation-related manufacturing or formulation problems and/or unwanted immunogenicity.