Bioreactor technologies for mammalian cell culture may seem quite sophisticated (1). In fact, efficient mammalian cell culture is simple and requires just two major elements: mixing and oxygen (O2) transfer. Traditional methods for mixing use an impellor, and the classical O2 transfer method features a sparging stone that expels air bubbles to increase the O2 transfer surface area in contact with a culture medium.

Mammalian cells are sensitive to shear forces and also to the toxicity of pure or enriched O2 atmospheres. A classical steel deep-tank bioreactor usually has a sophisticated control tower to control O2 and impellor mixing speed (2). Reasonably, the use of ambient air is ideal for bioreactors because it is nontoxic to mammalian cells. But because of the inefficiency of sparging-stone O2 transfer, an enriched or pure O2 supply is usually necessary. We might try to increase the flow rate of O2 (thus increasing O2 transfer), but that causes cell death when bubbles burst at the surface. So an improved O2 transfer method is desirable for mammalian cell culture bioreactors. The shear force sensitivity of mammalian cells to impellor tip speed becomes a technical issue during scale-up. In addition, deep-tank bioreactors usually require production downtime for cleaning, sterilization, and validation before each fed-batch production.

To address the above technical problems, the single-use plastic bag “Wave” bioreactor (www.wavebiotech.com) was developed by Vijay Singh (3, 4). Its single-use plastic bag eliminates production downtimes. Singh’s design has no impellor, so it creates no shear force. It uses no sparging and thus operates without bubble-burst cell damage, so it performs well for mammalian cell culture. Wave bioreactors are widely used in production of preclinical material, seed trains for larger production-scale cultures, and closed-system vaccine production.

Pioneering work by Dr. Singh opened new doorways for mammalian cell culture with disposable plastic bags. Currently many forms of single-use bioreactors have been created, most with either a plastic bag inner lining to transform classical deep-tank designs into single-use bioreactors or to create wave-style imitations that may violate Wave patents without significant improvement.

We have analyzed the advantages and drawbacks of the Wave bioreactor and found that the company did not precisely define and optimize its O2 transfer method. The wave motion was hypothesized to increased O2 transfer through an increased medium surface area. Here, we disclose a novel O2 transfer method based on maximizing the interface surface area between a bioreactor vessel’s surface and the current of culture medium through it. Based on this novel method, we have manufactured and tested different disposable plastic-bag bioreactors. We designed them to offer more efficient O2 transfer and a better mixing method with a mechanical advantage over the Wave bioreactor. These novel bioreactors represent new intellectual property based on our novel O2 transfer method. They hold great commercial promise for cost-effective mammalian culture and protein expression.

In Search of a New O2 Transfer Method

Most process development scientists in biotechnology use 125- to 250-mL shaker flasks to screen production cell line candidates by mammalian cell suspension culture. It is a useful method; however, we have observed that the effective volume is limited to 30–60 mL. Beyond that working volume limit, a sudden collapse of cell culture is often observed, which we hypothesized was due to a lack of O2.

We designed a frustoconical–bottom shaker vessel (Photo 1) to offer more air-containing inner space. The shape is of a cone with its pointed end truncated parallel to its base. When using a 3-L cell culture working volume, we achieved an extremely high cell density for CHO cell culture. Measuring the O2 level, we found that it is always 60–100% within the working volume, even with cell densities larger than 7% packed-cell volume (∼15–20 × 10-6 cells/mL). By simply changing (or reversing) the classical shaker flask’s bottom into a frustoconical bottom, we had surprisingly enhanced our CHO cell culture (5). 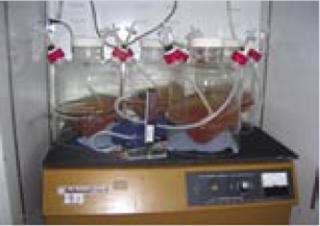 We then hypothesized that there must be a superior O2 transfer mechanism operating in the frustoconical-bottom culture vessel. On an orbital shaker platform, culture media appears to swirl in a motion resembling that created by a river’s strong current. By using a high-speed camera, we were stunned to find that this action was captured as a tilted surface of media repetitively sweeping the air-exposed walls of the bioreactor vessel. The culture medium develops a tilted and fast-moving surface that climbs one side of the bioreactor at any given time, giving the illusion that the medium is swirling in place.

We designed three methods to test the mechanism of this novel O2 transfer method. Figure 3 shows a 150-mL working volume culture vessel with the frustoconical bottom on a shaker platform with an orbital shaking speed of 100 rpm. As a control, we tested the same vessel with a tube bubbling device providing 3 L/min airflow. Table 1 clearly shows superior O2 transfer speed for this culture vessel.

Table 1: Results from a dissolved oxygen time course experiment show the O2 transfer speed of the 150-mL frustoconical-bottomed culture vessel on a shaker platform with a 100-rpm orbital shaking speed.

Table 1: Re sults from a dissolved oxygen time course experiment show the O2 transfer speed of the 150-mL frustoconical-bottomed culture vessel on a shaker platform with a 100-rpm orbital shaking speed. ()

We also tested the vessel wall and medium current interaction by using a rotating plastic bottle containing 0.5 L of culture medium at 50 rpm (Figure 3, Panel A). The control was the same type of plastic bottle containing 0.5 L culture medium at an airflow rate of 3 L/min (Panel B). Results clearly demonstrate superior O2 transfer speed for the rotating bottle method (Table 2).

As a final demonstration, we assembled a rolling wheel dipped into a bath of culture medium. Similar results obtained this way (data not shown), support our hypothesis and interaction theory (6).

Those experiments showed that interaction of a vessel wall (with a certain smoothness) and a current of medium (with a certain force) significantly increased cell culture O2 levels, thus establishing a novel O2 transfer method (6). However, no direct evidence shows O2 transfer established through the creation of microscopic bubbles by means of that interaction. To effect the rapid increase in DO, microscopic air bubbles would probably be transferred quickly into the culture medium. Thus, we hypothesize that the interaction creates microscopic bubbles, which is the theoretical foundation of this novel O2 transfer method (Figure 1). If that is the case, then the smooth-surfaced nature of the wall must play an important role. We went on to test different materials and found that a certain smoothness of ethylene vinyl acetate (EVA) plastic material works best for O2 transfer — and thus for plastic bag bioreactor production.

We believe that this novel O2 transfer method is the means underlying the Wave bioreactor’s O2 transfer mechanism (6). The wave creation increasing a culture medium’s O2 transfer surface area might play a minor role in O2 transfer, but it is primarily the smooth surface of the vessel wall and its interaction with a current of medium that increases O2 transfer (3, 4, 6). The larger the surface area the medium sweeps, the more O2 is transferred into it.

EXPERIMENTAL METHODS AND MATERIALS
We bought paper-patch DO and pH sensors (Photo 6, developed by Dr. Rao’s laboratory at the University of Maryland) from Fluorometrix Corporation (www.fluorometrix.com) (7, 8). We tested them using a carbonated beverage as a negative control because of its low O2 content. The positive control was increased gassing with an air sparging stone. To further normalize, we used a DO probe directly from an Applikon (ww
w.applikon-bio.com
) bioreactor. All controls showed that the paper-patch DO sensor responded to both low and high DO levels. 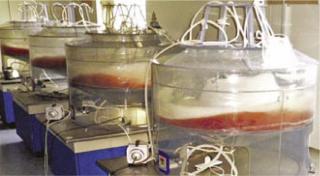 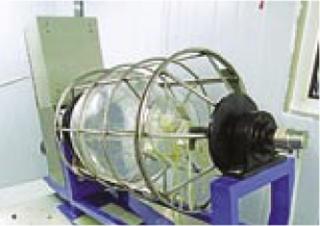 We measured pH using both a paper-patch pH sensor and a portable pH meter (Photo 6). Control was achieved with Hepes non–CO2-dependent buffer from Sigma (www.sial.com) and through airflow regulation to deplete CO2. We measured glucose levels using glucose strips and a one-touch glucose meter (Photo 6). Cell density was measured with a hemocytometer, and cell biomass was measured with PCV tubes, both from VWR Scientific Products (www.vwrsp.com).
We used CHO cell lines expressing 60–160 pg/cell/day of anti-CD52, anti-EGFR, TNFR2-Fc, EPO, and HBsAg for our bioreactor testing. AMP B001 basal growth medium and AMP F001 feed medium were used for serum-free suspension cell culture. We also used VERO and MDCK cells from the American Type Culture Collection (www.atcc.org) for microcarrier Cytodex 1 cell culture in our rotating plastic-bag bioreactors. During all culture processes, an air pump and air flow meter from VWR were used for O2 supply. 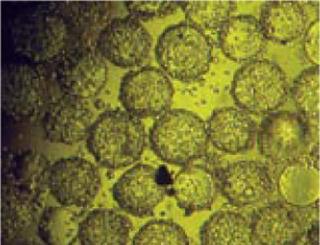 AmProtein has set up three contract-service facilities using these bioreactors. Our mammalian expression vector and cell line technology are available to partner companies for cost-effective production of preclinical materials. We’re currently developing a control tower to control pH, DO, temperature, and both orbital shaking and rotating speed (Photo 5).

Our Current bioreactor also features simplicity of ambient air supply, a disposable plastic bag to eliminate production downtime, and pH control through both air flow regulation and CO2 supply. There is no interference from foaming, little or no shear force, and no cell damage related to air bubbles bursting. The orbital shaking motion imparts superior mixing relative to rocking methods. 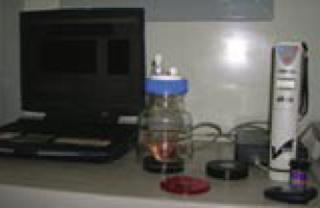 Throughout its working volume range, the Current bioreactor’s shaking motion carries with it a mechanical advantage far greater than that of a rocking platform, exemplified by early development stage difficulties with rockers. Rocking motion attempts to transfer the complete mass of a system to one side and then return it back to the other. So it requires very strong components, rockers, and bags — and it consumes large amounts of energy compared with smooth orbital shaking and relatively smooth two-dimensional rocking. Another advantage lies in independent intellectual property and a freedom to operate commercially.