A mammalian cell exists, interacts, reproduces, and dies as a result of intricate biochemical and biophysical mechanisms — many of which remain unknown or not fully understood even today. Technological advances have allowed us to investigate the details of organelles and cell membranes, of the types of molecules synthesized within cells, and their distribution and trafficking and the effects they have in their environment. Among the main macromolecules that make up a living cell, DNA and protein structures were studied in detail long before technologies enabled analysis of the inherently more complex and less predictable carbohydrate structures. Today, detailed analysis of complex carbohydrates remains challenging because of the close similarity between them and the very large number of possible molecular species involved.

It is widely recognized that complex glycans — expressed on the outer surface of cells — are in a position to modulate cell interactions, making them relevant players in the understanding of human health and disease. But training in carbohydrate chemistry, biochemistry, and biology lags behind the routine teaching of courses related to DNA and protein sciences. Thus, the popularity of carbohydrate studies declined from the beginning of the 20th century when industrial applications of polysaccharides were widespread. 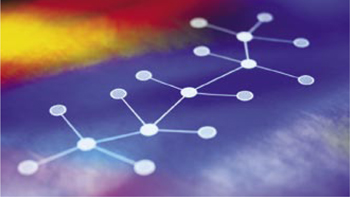 While we ponder whether we are actually living at the dawn of the era of “generic” biopharmaceuticals, perhaps we should take the time to learn about these complex molecules. Their analysis is a critical component in the demonstration of molecular comparability.

The Basis for Structural Complexity

Carbohydrates are substances that satisfy the formula (CH2O)n — as well as many derived substances — and the term came about long before detailed knowledge of the structural features was available. From a chemical standpoint, carbohydrates are polyhydroxyaldehydes (or aldoses) or polyhydroxyketones (or ketoses) and their derivatives (Figure 1). The simplest ones are monosaccharides that can be linked together to form oligosaccharides and polysaccharides. The different number of carbon atoms in a monosaccharide leads to the names aldotriose, ketohexose, and so on. 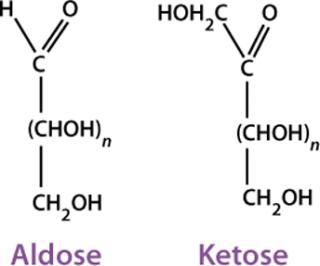 Glyceraldehyde is the simplest aldose and has one asymmetric (chiral) carbon atom, therefore exhibiting optical isomerism. That is, it can exist in the form of two nonsuperimposable mirror images called enantiomers (Figure 2). Enantiomers have identical physical properties except for the direction of rotating the plane of polarized light (−, left-hand or levorotatory; +, right-hand or dextrorotatory). The pair also has identical chemical properties except in relation to optically reactive reagents. 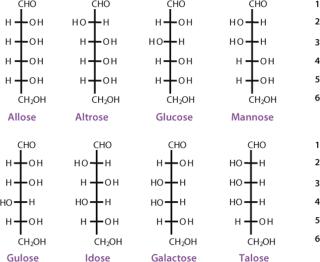 The carbon atoms in a monosaccharide are numbered following the rules of organic chemistry nomenclature. Thus, the aldehyde group is C-1, and the ketone group is C-2. The prefix D- (for dextrorotary) is added to each monosaccharide that has the same configuration as D-glyceraldehyde at the highest-numbered chiral carbon in its structure (the CHOH group most distant from the aldehyde group and next to the last CH2OH). Similarly, the prefix L- (for levorotary) is added to those monosaccharides with the same configuration as L-glyceraldehyde at the highest-numbered chiral carbon in its structure. The D- configuration is predominant in nature. The direction of rotating the plane of polarized light for a compound must be determined exp
erimentally, and it is then indicated with the − or + sign (between parentheses) immediately after the prefix D- or L-. Two monosaccharides that differ only in the configuration of one chiral carbon atom are called epimers.

Because the hydroxyl groups attached to the anomeric carbon can adopt two possible spatial orientations, that creates two stereoisomers: alpha (α) and beta (β). These two anomers (anomeric isomers) are interconvertible and exist in an equilibrium mixture in solution. Interconversion occurs through the open-chain structure with the reactive aldehyde or ketone group. The α and β forms in equilibrium rotate the plane of plane-polarized light an equal amount but in opposite directions, so the optical rotation rapidly changes (mutarotation) when any of the pure forms is dissolved in water toward a final equilibrium. In spite of the small proportions of reactive alhedyde or ketone present in that equilibrium, a sugar can participate in chemical reactions of either cyclic or open-chain form.

It is important to visualize the differences between monosaccharide structures. For this purpose, different conventions were developed. Linear Fischer projection formulas are useful for understanding the relationship between different common monosaccharides. Applying the same convention to cyclic hemiacetals results, however, in an awkward representation of the ring structure that can be more realistically depicted using a Haworth projection formula (Figure 6) or even more so using a chair conformation (Figure 7). Conversion between Fischer and Haworth representations must follow a number of rules. For a D- monosaccharide, any group directed to the right in the Fischer projection should be drawn downward in the Haworth projection; conversely, if a group is written to the left in Fischer, it should go upward in Haworth; the terminal −CH2OH group goes upward in Haworth. For an L- monosaccharide, the terminal −CH2OH group goes downward in the Haworth projection. 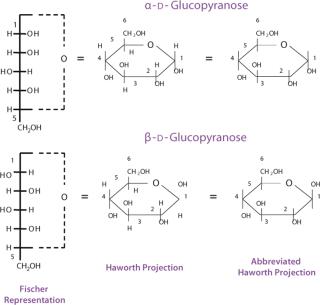 The next installment of this three-part article will address structural characteristics of polysaccharides and glycoconjugates. Part Three will focus on their analysis and its application in bioprocess monitoring.