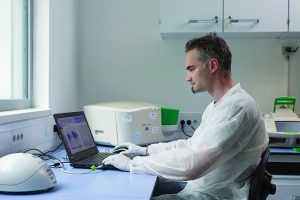 Gene therapies have reemerged as promising treatments to a number of genetic illnesses. Nearly 400 gene therapy clinical trials are recruiting or ongoing in the United States for diseases such as hemophilia and spinal muscular atrophy (1). The primary vehicles used today to deliver such therapies to patientsŌĆÖ cells are viral vectors such as adenoassociated viruses (AAVs), but producing biologically active vectors for gene therapy can be problematic. One difficulty is generating vectors at the correct concentration to yield a safe and effective therapy.

In general, AVV-based gene therapies require high concentrations of viral vectors to be effective. That is because such treatments often need to be administered in low volumes in smaller areas of the body, such as in the central nervous system (2). Unfortunately, if the AAV concentration is too high, the AAV capsid protein itself could trigger an immune response that causes the vector to break down and render the therapy ineffective (3, 4). Because many patients might have been exposed to AAVs at some time in their lives, treatments with high AAV concentrations could provoke adaptive immune responses (4, 5). Consequently, AAV developers must quantify AAV concentration precisely to administer the lowest dose to maximize efficacy and minimize side effects.

The Challenge Facing AAV Developers
AAVs are among the most common vectors for gene therapies because of their low immunogenicity and episomal nature, both of which help to minimize mutation risk (6). Unfortunately, the complex AAV vector production process can limit developersŌĆÖ abilities to control final concentration in a batch. The process begins by inserting a desired genetic payload sequence into a virus and producing vectors using transfected host cells. A developer then lyses host cells, extracts viral particles, and purifies them to eliminate host-cell contaminants and minimize AAV virions that are missing the therapeutic sequence. Predicting AAV concentration in an end product can be difficult, especially as processes scale up to larger bioreactors. Establishing an optimized process for large-scale production is one of the main challenges facing AAV developers today.

Typically, upstream processing delivers an AAV concentration of up to 2┬Ā├Ś 1011 vector genomes per milliliter in crude harvests, which is insufficient for clinical use (3). Gene therapies directed at the liver (such as those for hemophilia┬ĀB), must be delivered to patients at a concentration of 1012 vector genomes per kilogram. Therapies aimed at the central nervous system to treat conditions such as spinal muscular atrophy must be administered at an even higher dose: 1014 vectors per kilogram.

To deliver an effective dose at a reasonable volume, a drug must be concentrated 100ŌĆō10,000 times (3). Thus, developers must measure viral titer after the purification and concentration steps to ensure that the correct dose of their final product has been reached. For that critical purpose, AAV developers require reliable testing methods. Unfortunately however, few established standards exist for AAV purity and safety. Consequently, AAV developers must design their own testing protocols.

To quantify viral titers accurately, developers need a tool that can count AAV vector genomes precisely. A commonly used method for quantifying AAV titer is quantitative polymerase chain reaction (qPCR), but this method is not precise enough to guarantee the development of safe and effective therapies. That is because qPCR results are relative: qPCR technology measures nucleic acid concentration by measuring how many amplification cycles it takes to reach a certain fluorescence threshold. The resulting number is converted to concentration using a standard curve. It is difficult to generate accurate standard curves because the process is often fraught with human error, which increases uncertainty in final measurements. Using standard curves can lead to inaccurate titer quantifications, depending on the method used to produce the reference DNA, and it can lead to an overestimation of viral titer (7). In fact, qPCR results can vary by up to a factor of two (8). 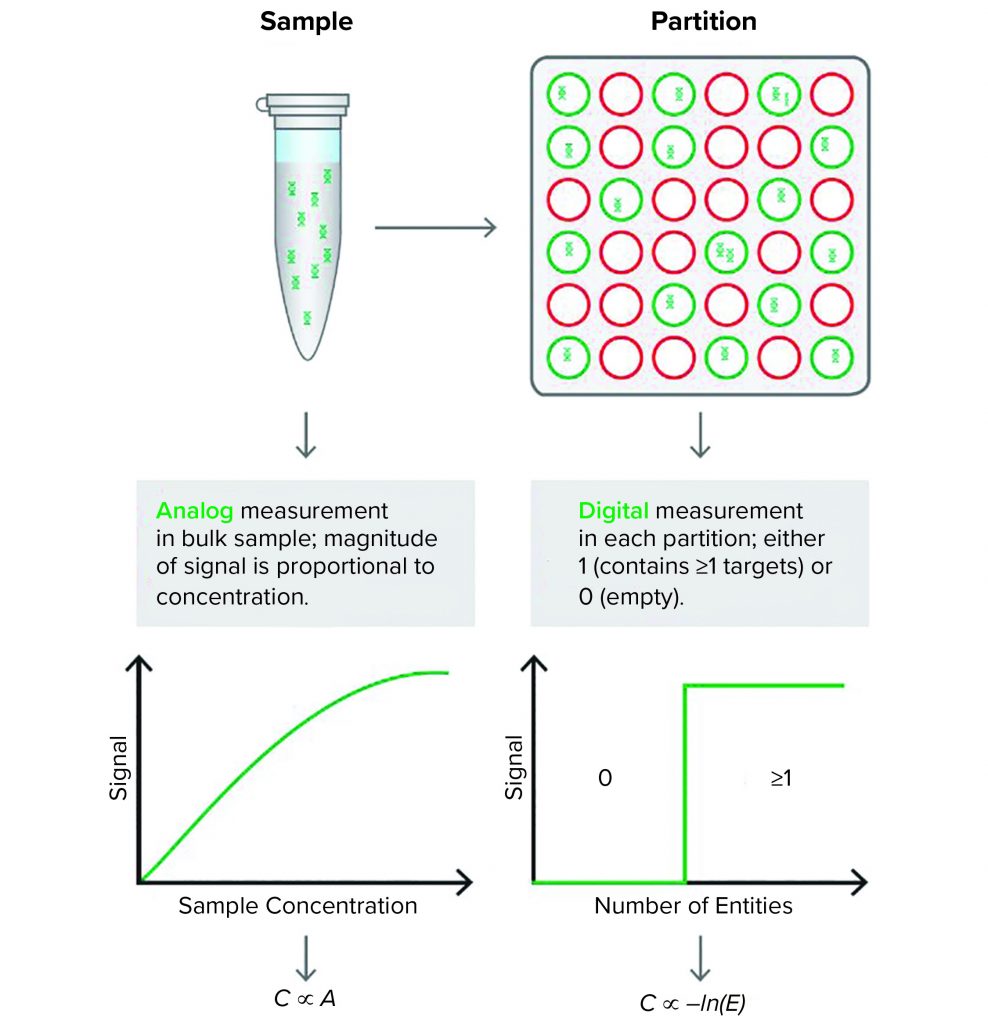 Figure 1:ŌĆéQuantitative polymerase chain reaction (qPCR) (left) produces an analog signal output that is translated through a standard curve into DNA concentration. The Droplet Digital PCR (ddPCR) technology (right) partitions the reaction mixture and provides a digital, binary signal that indicates the presence or absence of DNA in each partition. The proportion of ŌĆ£positiveŌĆØ and ŌĆ£negativeŌĆØ partitions is used to determine the concentration of the input DNA

To begin, a researcher first loads 20┬Ā╬╝L of reaction mixture onto cartridges, and a droplet generator divides the reaction mixture into about 20,000 uniform 1-nL droplets. Each droplet contains zero, one, or a few nucleic acid strands and acts as its own reaction vessel in which a separate PCR reaction takes place. The primers used in these reactions are specific to a sequence from the AAV vector. Thus, amplification will take place only in droplets that contain DNA from that vector. The sequence-specific probes are cleaved as the DNA amplifies, and a fluorescent signal develops in droplets containing the target sequence. In droplets lacking the target sequence, the reporter dye does not emit a strong signal. After amplification is complete, a digital reader streams the droplets one by one past a detector that counts the number of fluorescent and nonfluorescent droplets. Using Poisson statistics, it is possible to calculate the concentration of AAV DNA in the original sample.

By contrast with qPCR, ddPCR does not depend on a standard curve. Instead, it generates an absolute count of the number of target molecules present. The ddPCR technique also is more resistant to contaminants that affect the rate of amplification because it does not rely on amplification efficiency to quantify nucleic acids.

ddPCR Method in Practice
The need for a precise, sensitive, and robust tool for quantifying viral titer is not unique to AAV development. Several examples across biology demonstrate the potential of the ddPCR technology to serve in this role. For example, my team and I at the National Institute of Biology in Ljubljana, Slovenia, tested the performance of ddPCR technology in quantifying potato virus Y (PVY) variants in potato plants (10). PVY comes in numerous different strains, and because each strain could amplify to different levels as a result of primer and probe mismatches, developing a standard curve for qPCR calibration that ensures equal quantification of each strain can be difficult.

Because ddPCR doesnŌĆÖt rely on amplification level to quantify a nucleic acid variant, we wanted to determine whether the method could quantify the virus reliably. Indeed, we found that ddPCR was an order of magnitude more sensitive than qPCR in detecting certain PVY variants. Also, ddPCR exhibited a wide dynamic range, limited only by the number of droplets that were analyzed. We found that three different qPCR assays revealed three different viral counts, and we were unable to determine the correct count until we analyzed the same strain using ddPCR. Those data not only demonstrated the sensitivity and dynamic range of ddPCR technology, but the data also showed how it could be used to resolve the uncertainty produced by qPCR.

We transferred our ddPCR expertise to the field of gene therapy in 2016 and found that such sensitivity also applies to AAV titer quantification. In one study from another laboratory, the ddPCR method was up to four times more sensitive than qPCR was in its quantification of single-stranded AAV vector genomes (11).

In my laboratory, we found that ddPCR is more robust and precise than qPCR for that purpose. Specifically, in our broad examination of AAV viral titer (8), we tested samples from several steps of the downstream purification process using ddPCR and qPCR and found that ddPCR produced a significantly lower coefficient of variation. In the same study, ddPCR results helped us understand how we could improve the downstream bioprocessing workflow: The technology detected free-floating DNA, which decreased in prevalence following treatment with a deoxyribonuclease, thus demonstrating the importance of such pretreatments. Such levels of sensitivity and robustness can increase workflow effectiveness and make gene therapies safer. Knowing a batchŌĆÖs AAV concentration enables developers to predict the potency of gene therapy treatments and determine the correct dose for patients.

WhatŌĆÖs Next
One remaining obstacle to quantifying AAV viral titer is the potential to mistake AAV capsids containing gene fragments for fully functional vectors. That could lead to an overestimation of viral titer and production of a treatment with low potency. It is already known that viral genome concentration and infectious genome concentration can differ (12, 13), and more research is needed to determine why those two measures do not correlate.

Another challenge is that with single-plex tests, it is impossible to determine whether full genes are present or if a probe is binding to a mere DNA fragment that happens to contain part of the gene. In the future, we plan to develop higher multiplex assays ŌĆö beyond the already reported duplex assays (9) ŌĆö that will increase the probability of quantifying whole, intact, and infectious vector genomes using ddPCR technology. Those data could help us understand what makes AAVs effective and help us develop safer and more effective gene therapies.

The Future of Gene Therapy Development
Quantification was never as much of a concern in small-molecule drug development as it is for gene therapy development. The organic nature of gene therapies creates uncertainty in their manufacturing process. The need to administer the right dose makes it critical that AAV biomanufacturers monitor AAV viral titer consistently.

With so much potential at stake, gene therapy developers must refocus their efforts on refining their bioprocessing workflows to ensure that these therapies are as safe and effective as traditional therapies. With proper regulation, standardization, and quality control, gene therapy biomanufacturers can minimize the uncertainty in their processes and build gene therapy pipelines that deliver novel treatments to millions of patients reliably. For those patients, gene therapy might be their only hope for a meaningful improvement in their health.

Droplet Digital PCR (ddPCR) is a trademark of Bio-Rad Laboratories.