This application note describes the cultivation of Chinese hamster ovary (CHO) suspension cells in the Finesse SmartGlass vessel bioreactor with a maximum working volume of 2.0 L. Using chemically defined minimal media, cell densities of up to 7.44 106 cells/mL were achieved. Recombinant secreted embryonic alkaline phosphatase (SEAP) expression was induced by medium exchange and temperature shift. Maximum SEAP activities of up to 63 U/mL were reached. A novel stirred glass bioreactor suitable for cell culture applications at benchtop scale was designed by Finesse Solutions, Inc. With a maximum working volume of 2.0 L, this bioreactor is controlled by the Finesse G3Lab controller.

The present study focuses on the cultivation of CHO suspension cells in fed-batch mode using chemically defined minimal culture media and SEAP expression, which is induced by medium exchange and temperature shift. The bioreactor was agitated by a combination of a modified Rushton turbine and a three-bladed segment impeller, which were found to be suitable for cell culture applications based on previous fluid dynamics investigations. The bioreactor cultivation ran up to nine days, achieving maximum cell densities of 7.44 106 cells/mL at high cell viabilities of >96 % until the end of the stationary growth phase. The maximum SEAP activity was about 63 U/mL. By increasing impeller speed and sparging of oxygen, it was possible to maintain the DO level around the set point of 40% saturation while preventing excessive shear stress or foam production through aeration.

glucose and lactate concentrations, and SEAP activity during a cultivation time of 13 days. Starting from an initial cell density of 0.6 106 cells/mL, the cells grew with a mean growth rate of 0.893/day, corresponding to a doubling time of 18.6 hours. About 36 hours after starting the cultivation, 1 L fresh growth medium was added. The growth rate after media addition was slightly lower, with 0.871/day, so that the total cell density before the medium exchange was 4.64 10 6 cells/mL. The maximum cell density of 7.44 106 cells/mL was achieved after 161 hours of cultivation. The cell viability remained high (over 96%) until the end of the stationary phase, when all substrates were depleted. Afterward, it dropped rapidly to zero within one day when the cultivation was stopped. The substrate consumption and metabolite production were comparable to our experiences with similar stirred benchtop-scale bioreactors. About 0.9 g glucose were consumed for the production of 106 cells/mL, and glucose was depleted after 192 hours of cultivation. At the end of the exponential growth phase, the cells started to consume the lactate, and the maximum lactate concentration after the media exchange was 2.15 g/L (see Figure 1, middle). The SEAP activity increased rapidly after the medium exchange (Figure 1, right), whereas the temperature shift (37 C to 31 C) led to an increase of the enzymatic activity. The maximum SEAP activity of 62.7 U/mL was detected after about 210 hours of cultivation. During the complete cultivation, the DO level was maintained above critical levels, preventing oxygen limitations on the cells, except of the three hours before the medium exchange (Figure 2). 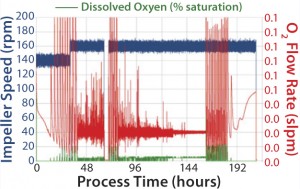 FIGURE 2: Online data of the impeller speed, dissolved oxygen level, and O2 flow rate used for the DO control

Some higher fluctuations occur at the beginning of the cultivation, after the medium exchange, and during the stationary growth phase. That may be explained by the limited dynamic range of the mass-flow controllers for oxygen and bubble attachment at the DO probes. However, foam formation was effectively prevented due to the low gassing rates.

Stephan C. Kaiser, Katharina Blaschczok, and Dieter Eibl are with the department of Biochemical Engineering and Cell Cultivation Techniques in the School of Life Science and Facility Management’s Institute of Biotechnology at the Zurich University of Applied Sciences in Switzerland.