Cell culture is widely used for stable expression of monoclonal antibodies with posttranslational modifications. Despite having a stable cell line, a protein product is still in danger of improper modifications from chemical interactions with media. For example, the primary amino groups on a protein are susceptible to reactions with reducing sugar molecules. In the case of a reaction with glucose, this is called
glycation. The relationship between glucose concentration and glycation is explored here. 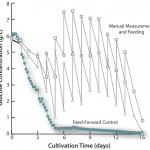 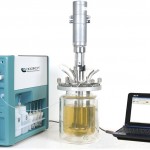