Japanese biopharma firm Astellas will pay Californian biotech Sutro $90 million but could pay a further $422.5 million in development, regulatory and commercial milestones for each of the three undisclosed oncology candidates.

While antibody-drug conjugates (ADCs) have established themselves on the commercial front, with 12 approved in the US, Sutro says its engineered iADCs are a potential groundbreaking modality in the treatment of cancers for which no broadly effective therapy is currently available. 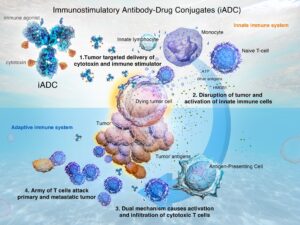 Method of action for iADCs

â€śSimilar to ADCs, iADCs combine an antibody with a cytotoxic small molecule compound to induce immunogenic cell death. But iADCs, which represent a next-generation anti-cancer modality, have an added component, which is the immune modulating small molecule contained on a single antibody,â€ť Trevor Hallam, Sutroâ€™s CSO told BioProcess Insider.

The modality works by inducing immunogenic cell death in conjunction with immune modulation and are designed to both kill the tumor locally and prime a systemic anti-tumor immune response, he continued.

â€śThe dual mechanism of action is expected to boost anti-cancer action and has the potential to turn cold tumors hot and bring new drug therapies to patients who do not respond to existing therapies.â€ť

Under terms of the arrangement, Sutro will engage in research and preclinical studies to identify candidate compounds and Astellas will pursue clinical development using its global R&D and commercialization capabilities in the area of antibodies and the small molecular components.

â€śWeâ€™re very excited about this partnership and working together as Astellas is a leading biopharmaceutical company â€“ particularly within the oncology space â€“ that has built strong global R&D and commercialization capabilities in antibodies and small molecular compounds, which we believe will be instrumental to the long-term success of these novel drugs,â€ť said Hallam.