Under the deal, CMAB will conduct CMC development and manufacturing to support the planned submission of an IND for the candidate drug in China and the US.

No further details about BJ-005 were provided. 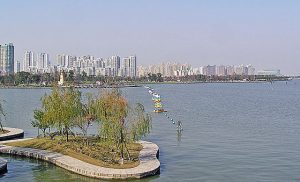 CMAB is based at the Suzhou Industrial Park in China. Image: Wikimedia/CC/Donaldytong

According to BJ Biosciencesâ€™ website the drug is a bi-functional antibody intended for the treatment of â€ścancer.â€ť On the firmâ€™s pipeline page the timing for IND submission is listed as Q4 2020.

BJ Bioscience chair Xiaoyong Jin said, â€śThe primary goal for our cooperation with CMAB is that we may focus more on the innovative R&D fields that we are good at and leave the CMC part to CMAB because it is its expertise.

CEO Haizhou Zhang cited CMABâ€™s expert workforce, experience developing innovative products and â€śprotection of the intellectual property rights of its customersâ€ť as key to winning it the contract.

CMAB is based at the Suzhou Industrial Park in China. The firmâ€™s facility â€“ which opened in 2018 â€“ has capacity for pilot-scale development projects and commercial production.

The site houses 3,700mÂ˛ of laboratory space and a 3,000mÂ˛ GMP manufacturing unit, with reactor capacities ranging from 20 L to 2000 L.

The manufacturing facility was established last year after CMAB secured $34 million in a series B fundraising round.

At the time CMAB said the site would comply with international standards, including â€śthose of the US Food & Drug Administration (21 CFR), European Medicines Agency (Eudralex), WHO, and harmonized PIC/S and ICH standards.â€ť

The Chinese contract manufacturing sector is expected to experience growth as a result of the recently introduced Drug Administration Law (DAL).

The law, which was passed by the Chinese National Peopleâ€™s Congress onÂ August 26, introduced a range of measures, including a marketing authorisation holder (MAH) system similar to those in place in the US and EU.

Part of the MAH programme covered the use of CDMOs. Previously, drug approvals were contingent on the developer investing in manufacturing capacity in the county.

However, inÂ 2015Â the Government introduced a pilot scheme allowing the approval of products whose manufacture was outsourced.