Dyadic Internationally has struck three deals in two weeks as its industrially-proven fungus-based expression system receives the attention of biotech and Big Pharma.

Dyadic reported a busy first quarter 2019 with R&D revenues of $403,000 (€359,000), more than double the same period 2018. The firm also updated investors on recent activity, specifically a wave of deals over the past few weeks supporting its C1 gene expression platform.

In April, Australia’s Luina Bio struck a sub-licensing deal with Dyadic, and a new joint venture company, Novovet, has been formed to develop animal health drugs and vaccines using the C1 platform. And earlier this month, Dyadic announced a sub-licensing agreement with Alphazyme to use C1 to produce a nucleic acid as a therapeutic or diagnostic agent. 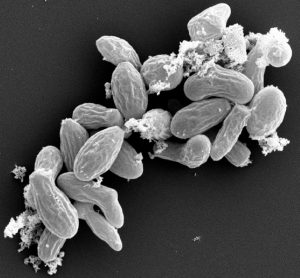 The C1 expression platform is based on the fungus Myceliophthora thermophila. Image c/o Dyadic

Most recently, Dyadic entered into a deal with Serum Institute of India, for the firm to use the C1 technology to express up to twelve proteins – eight monoclonal antibodies (MAbs) and four recombinant vaccines. Serum has the option to acquire an exclusive commercial sub-license for each of the twelve products for 15 years from the date of the first commercial sale.

“There is a lot of people now paying attention to the fact that there is somebody that’s going to bring one or more of these 12 drugs and vaccines to preclinical/clinical stage and commercialization,” Dyadic’s CEO Mark Emalfarb said on a financial call. “That’s a big milestone for us to have a partner with that strength that experience and I think that’s resonating throughout the industry from based on conversations we’ve had already today.”

Matthew Jones, managing director of Business Development & Licensing, added the timing of these deals is right for Dyadic.

“We are sitting with decision makers in biotech and Pharma all the time. We are presenting you on a weekly basis to some senior figures here and these companies, and I think we’ve got their attention,” he told investors.

He noted that pharma moves at perhaps a slower pace than other industries, and Dyadic still has a lot of work to do for the C1 platform to be fully adopted, but the quarter’s results show the pendulum is moving in Dyadic’s favor. “While we haven’t disclosed the details of all these discussions, you’ll see some of the fruits of that Labor comes through now.”

Based on the fungus Myceliophthora thermophila, the C1 gene expression platform is used in the industrial enzyme space, where it achieves productivity as high as 80 grams per liter for a single enzyme with high purity.

Since 2015, Dyadic International has focused on bringing the platform to the biomanufacturing space, and while titers have not yet reached the same heights, Emalfarb updated investors on the continued scientific progress of the C1 platform.

“In an ongoing research collaboration we have now demonstrated two times the initial target expression of an FC fusion protein for 12.2 grams per liter or 1.7 grams per liter per day. Further, C1 universal whole cell improvement by expanding the proprietary C1 protease library leading to greater stability and productivity of C1 expressed proteins.”

“In summary, as the past few months have demonstrated, Dyadic is making significant progress in applying the power of our industrially-proven C1 gene expression platform globally to animal/human, pharmaceutical biologic vaccine, drug development and biomanufacturing.”