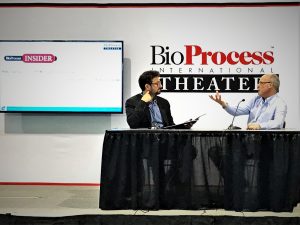 Speaking to BioProcess Insider at BIO in Boston this week, chief scientific officer at Fujifilm Diosynth Biotechnologies Andy Topping described the acquisition as “a statement of intent” for the company.

“It’s early days to see how Irvine gets integrated into the Fujifilm family but it’s a big deal,” he said. “This is a lot of money to spend, acquiring a company to add to that life sciences capability within Fujifilm so I think it’s a big statement of intent.”

He added the deal brought Fujifilm a level of supply chain security. “It is part of that back integration of the supply chain; how do we make certain we aren’t dependent on people we have less control over for these important materials going into our offerings.”

Topping was interviewed as part of the Insider Daily series at the BPI Theater at BIO.

In a statement sent to this publication, Fujifilm Corporation added the acquisition advances its growth strategy in the healthcare area.

“Fujifilm continues to invest in contract development and manufacturing of biopharmaceuticals and regenerative medicine,” the firm said.

“With the acquisition of ISUS and ISJ, Fujifilm will now be able to provide a broad product portfolio from biopharmaceuticals to in vitro fertilization and cell therapy, strengthening its global business in addition to expanding domestic business through strong sales network in Japan.”

The market for cell culture media is growing by approximately 10% annually, the firm previously said, as industry need such products to make biopharmaceuticals and regenerative medicine products.

Irvine Scientific has recently launched a number of products in this space:

In September 2017, the firm launched a chemically-defined, animal component-free medium for the differentiation of monocytes into immature dendritic cells, and subsequent maturation in dendritic cells.