Biomanufacturing volumes are set to increase by 45% to 6,400 kL over five years. But with demand growing at over 10% per year and the potential arrival of Alzheimer‚Äôs MAbs, there may still be a shortage in capacity.

In a report published in conjunction with the CPhI Worldwide meeting in Frankfurt, Germany this week, Dawn Ecker, director of bioTRAK Database Services, BioProcess Technology Group, BDO, spoke of the current capacity availability within the biologics industry and potential restraints in the next few years.

North America currently holds the majority of manufacturing capabilities ‚Äì roughly half the world‚Äôs bioreactor capacity ‚Äì but over the next five years the region is set to stagnate in terms of growth while Europe and Asia catch up.

‚ÄúBy 2023, with significant growth rates projected in Asia (~9%) and Europe (nearly 15%), North America and Europe will have equivalent capacity,‚Äù Ecker says. ‚ÄúThe capacity growth in these areas, particularly in Korea and Singapore as well as Ireland, are likely due to government incentives and tax advantages, among other factors.‚Äù 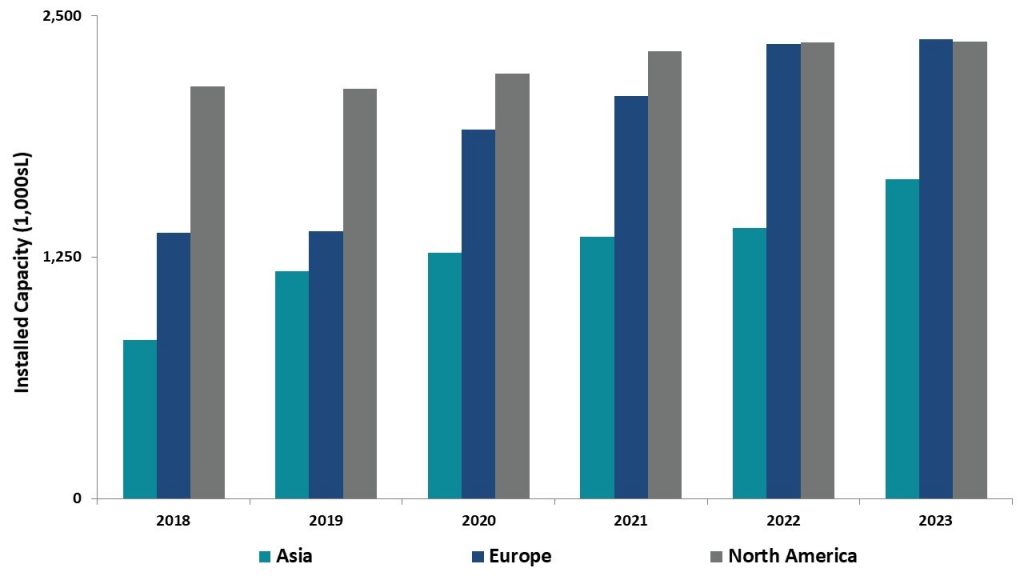 Under current estimates, such levels of capacity inhouse and available to the industry from contract development and manufacturing organizations (CDMOs) should satisfy industry‚Äôs volume demands, she added.

However, these estimates are based on ‚Äúthe mostly probable scenarios,‚Äù Ecker says. If there are significant developments in biologics for indications such as Alzheimer‚Äôs disease or broad cancer treatments like PDL/PDL-1 checkpoint inhibitors, this could all change. The approval of these types of products could spark a new spate of ‚Äòblockbuster‚Äô drugs that would require much higher levels of manufacturing capacity.

If several ‚Äúlarge-demand products obtain regulatory approval and adequate reimbursement by healthcare oversight organizations or become part of a managed entry agreement between a company and public payer of a social or national health insurance system, a significant increase in demand for manufacturing capacity could occur potentially leading to a serious capacity shortage,‚Äù Ecker states.

Approved biologics for diseases such as Alzheimer‚Äôs Disease, Parkinson‚Äôs Disease, Diabetes, and some coronary heart disease or atherosclerosis products, are projected to require volumes of over 750 kg per year, she adds.

While the validity of approval and demand prophecies lie in the hand of regulatory bodies and healthcare systems, Biogen recently stepped closer to bringing a potential Alzheimer‚Äôs disease monoclonal antibody to fruition.

The firm announced plans last month to seek US Food and Drug Administration (FDA) approval for its previously ‚Äòdiscontinued‚Äô Alzhemier‚Äôs disease drug aducanumab. The MAb targets a protein called beta-amyloid that is thought ‚Äì by some ‚Äì to play a role in Alzheimer‚Äôs disease progression.

Bioprocess Insider editor Dan Stanton will be talking about Ecker‚Äôs predictions along with reports on China‚Äôs biologics boom and developments in the cell and gene therapy space as part of a media panel at CPhI on Tuesday.