Fujifilm has begun construction on a facility in Texas described as the largest single-use CDMO production campus in North America.

Once operational ŌĆō by 2024, according to the firm ŌĆō the $300 million expansion will add 138,000 square feet to the existing 300,000 square feet campus, providing space for multiple 500 L and 2,000 L single-use bioreactors and associated disposable purification equipment. 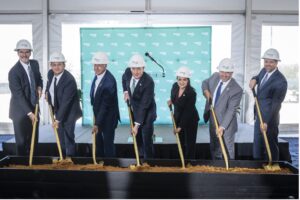 ŌĆ£Not only is it a significant capital investment creating 150 new skilled jobs, it will also strengthen TexasŌĆÖ expertise in biotech and life sciences with what is expected to be the largest single-use CDMO production campus in North America.ŌĆØ

FujifilmŌĆÖs single-use ambitions go hand-in-hand with its fixed stainless-steel manufacturing operations. The firm is constructing a ┬ź200 billion ($1.4 billion) site in Holly Springs ŌĆō about 10 miles southwest of Raleigh ŌĆō North Carolina set to boast 160,000 L of mammalian cell culture capacity, made up of eight 20,000 L stainless-steel tanks. The site will be expandable to 640,00 L.

In related news, Fujifilm has teamed with RoosterBio to offer its customers the latterŌĆÖs process development technology for both mesenchymal stem/stromal cells (MSC) and extracellular vesicle (EV) / exosome programs.

ŌĆ£MSC products are known to have great potential in areas such as regenerative medicine and immune system modulation. In addition, exosomes are attractive as drug delivery vehicles as well as therapeutics. The partnership is aligned with our core purpose of advancing tomorrow’s medicines by enabling the advancement of our customer’s pipelines in this space.ŌĆØ