There are over 90 companies actively producing products for the global marketplace from 112 manufacturing plants, Dawn Ecker, managing director, bioTRAK Database Services told us. And â€ślooking forward to 2025, microbial capacity will expand to just over 575kL with more than 10 companies installing capacity in the next several years.â€ť 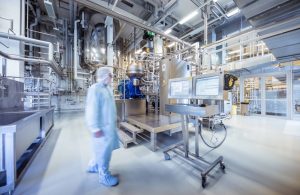 Swiss contract development manufacturing organization (CDMO) Lonza is one of the firms investing, having announced it is upping microbial development laboratories at its Visp, Switzerland site by 50% earlier this month.

â€śOver the past few years, there has been a steady increase in demand for microbial capacity. This is driven by growth in the heterogeneity of the biotech pipeline and growth of smaller and complex next-generation molecules that offer opportunities for new therapies,â€ť Shiva Khalafpour, vice president, head of Microbial Business Unit, Lonza told BioProcess Insider.

Khalafpour said while monoclonal antibodies (mAbs) which â€śare typically expressed in mammalian systems are probably still the dominant class, there is definitely a big rise in the number of the smaller type of molecules, which are better suited for microbial expression systems, and tend to be able to better penetrate into the cells.

She continued: “Microbial systems are very versatile. We have our own XS expression system that uses a toolbox of hosts and genetic elements and that is able to create a robust strain producing the right product quality and high yields.”

While microbial is increasing, it still pales in significance with demand for mammalian capabilities.

According to the BDO report, the growth of mammalian capabilities is â€śhighly active and dynamic â€“ with significant growth forecast by 2025.â€ť As such, global mammalian capacity is expected to reach 7,500kL.

A vast amount of capital expenditure has been invested by different companies to up mammalian manufacturing capacity.

Meanwhile, Lonza invested $935 million to expand its mammalian manufacturing facilities inÂ Visp,Â SwitzerlandÂ and Portsmouth,Â US in May as well as increasing its capabilities in Singapore in October. Â