German drugmaker Boehringer Ingelheim will not commercialize its approved adalimumab product Cyltezo in Europe and is discontinuing all biosimilar development activities outside the US.

Earlier this month, an article published in Bioprocess Insider considering the impending exit of Big Pharma from the biosimilars space brought a lot of attention from industry and investors. The piece drew on Merck KGaAâ€™s abandonment of its biosimilars programs in 2017 as an example, and now fellow German Big Pharma firm Boehringer Ingelheim is contemplating similar, outside of the US at least.

â€śBoehringer Ingelheim believes the introduction of high-quality, lower-cost biosimilars is critical for both patients and the sustainability of the healthcare system,â€ť spokesperson Ralph Warsinsky told BioProcess Insider. 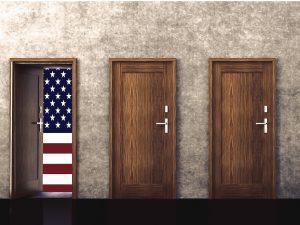 Boehringer Ingelheim shuts the doors on biosimilars outside the US. Image: iStock/Malik Evren

However, â€śat this point in time, future biosimilars activities will be driven out of the US market, including partnership opportunities, while Boehringer Ingelheim is stopping development activities for the rest of the world.â€ť

A snapshot of Boehringer Ingelheimâ€™s biosimilar pipeline webpage from December 2017 shows a version of Rocheâ€™s Avastin (bevacizumab), BI 695502, was in Phase III clinical studies, and Cyltezo (BI 695501), a version of AbbVieâ€™s Humira (adalimumab), had been approved. An error message greets website viewers when visiting the page today.

Humira is the top selling drug in the world. In 2017, AbbVie earned $18.4 billion (â‚¬16.2 billion) in worldwide sales from the monoclonal antibody, with the US market contributing $12.4 billion.

In 2017, Boehringer Ingelheimâ€™s Cyltezo became the first biosimilar version to be approved in Europe, and the second to be approved in the US. Neither are available, though Warsinsky said only the US product is now expected to be commercialized.

â€śWhile Boehringer Ingelheim had planned to bring Cyltezo to patients in the EU, due to the patent litigation with AbbVie in the US, we will not commercialize our biosimilar in the EU,â€ť he said.

In the US, settled lawsuits have led several biosimilar firms to agreeing to launch their adalimumab products from 2023, but Boehringer Ingelheim continues to battle with AbbVie in the courts in efforts to launch Cyltezo earlier than this.

â€śOur focus is on bringing Cyltezo to the US market and we are committed to making it available to US patients as soon as possible and certainly before 2023.â€ť