Korean CDMO Samsung Biologics will open an R&D lab in the San Francisco area later this year, though admits to delays due to COVID-19.

Contract development and manufacturing organization (CDMO) Samsung Biologics has established itself as a large-scale biologics producer from its base in Incheon, South Korea. Along with 364,000 L of bioreactor capacity, the firm expanded its services in 2017 to include cell line and process development (PD) services.

And now the firm is coming to the US. 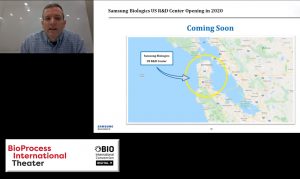 John Gill spoke at the BPI Theater at BIO

Eagle-eyed readers will remember Bioprocess insider already reported that plans were afoot to enter ŌĆ£one of the biggest markets for development servicesŌĆØ last September, but speaking as part of the Bioprocess International Theater at BIO last week, John Gill, part leader at Samsung Biologics confirmed the location of the R&D facility will be in San Francisco, California and will open later this year.

ŌĆ£We’re excited to bring our capabilities and our expertise to the US,ŌĆØ he said during his presentation entitled ŌĆśGet to IND Faster: Accelerated & High Performance Cell Line Development,ŌĆÖ though noted that the date of opening has been affected by the COVID-19 situation.

Further details are to come but speaking last year Gill said the facility will offer process and cell line development to US customers. It will also be used to help roll out Samsung BiologicsŌĆÖ own proprietary cell line platform.

Customers have had access to the CHOZN GS CHO (Chinese Hamster Ovary) mammalian cell expression system, licensed from MilliporeSigma, but this year the firm is also offering an in-house CHO-based system it claims can produce titers of over 10 g/L for immunoglobulin G (IgG).

ŌĆ£It gives flexibility to the clients to choose what platform theyŌĆÖd like to use,ŌĆØ said Gill at the time. ŌĆ£It also shows weŌĆÖre capable of developing our own technology and shows the capability of the science behind the CDO. So, weŌĆÖre not necessarily just a service provider but we can help the clients develop not only their cell line but their process for manufacturing.ŌĆØ

In related news, Samsung Biologics has inked two deals worth nearly $240 million to produce drugs for an undisclosed Swiss company, according to Korean news source Pulsenews. This comes weeks after the CDMO signed an eight-year deal worth $231 million to provide flexible capacity for Big Pharma firm GlaxoSmithKline.

Update – Since publication, this article has been changed to reflect that ‘Samsung Biologics’ no longer uses the iteration of ‘Samsung BioLogics’ with a capitalized ‘L’ in its brand identity.