In what has become one of the most anticipated presentations at the Phacilitate conference, Susan Nichols, CEO of cell therapy firm Falcon Therapeutics, laid out the top 10 events of the previous year that have shaped the regenerative medicine space, driving conversation, investment, and innovation.

The top spot in 2019 focused on efforts to increase patient access to the life-changing therapies entering the market, with Mayās approval of Novartis/AveXisā Zolgensma (onasemnogene abeparvovec) and its unprecedented $2.1 million (ā¬1.9 million) price tag being the catalyst for change. 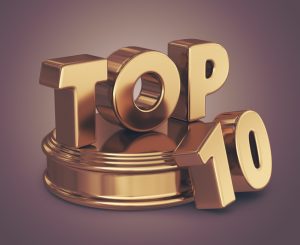 For further context, check out the āTop 10 cell and gene therapy milestones of 2018ā here but here in reverse order is the full list of the top 10 key events of the previous 12 months, as presented at the conference in Miami, Florida:

The juryās decision left Gilead to pay $585 million plus 27.6% in royalties, totaling $752 million, to BMS and Sloan Kettering, resolving a case filed a day after Yescarta won approval in October 2017.

But in a post-script that could well feature on Nichols 2020 list, it has been suggested the emboldening of BMS has led the firm to file a motion last week to include punitive damages that would raise Gilead’s penalty to $1.5 billion.

Vertex and CRISPR Therapeutics opened clinical trials in b-thalassemia and sickle cell disease to replace the defective genes that case these disorders and in November, the firms announced positive efficacy data from the first two patients treated with the investigational therapy CTX001.

āThe significance is CRISPR therapies have finally arrived in the clinic,ā Nichols said.

With a lack of third-party capacity especially for viral vector production, 2019 saw numerous investments by major cell and gene therapy players to grow their internal networks. Some of the examples Nichols pointed out include: 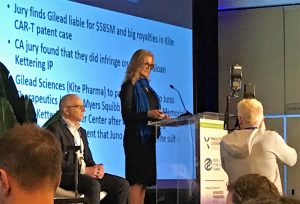 Positive data from Decemberās American Association of Hematology (ASH) meeting in San Diego, California was a further boon for the sector, said Nichols.

The candidate ā licensed from Nanjing Legend in a $350 million deal ā will move into a full Phase II study this year.

For Vertex, the deal represented its entry into the cell therapy space, complementing its move into gene editing just months prior with the acquisition of Exonics and a research expansion with CRISPR Therapeutics.

But for the industry, the investment in a company developing a cell therapy for a large indication other than cancer is of major significance, said Nichols.

According to Nichols, these deals by Astellas are a āsignifier that medium pharma may be using advanced therapies to grow and expand.ā

With a wealth of therapies moving through the clinic, capacity is at a premium and 2019 saw contract development and manufacturing organizations (CDMOs) scrabbling to secure capabilities.

Thermo Fisher acquired Brammer Bio for $1.7 billion, then Catalent paid $1.2 billion to add Paragon Bioservices to its CDMO offering. Both marked the first move into gene therapy services by the two large contract manufacturers. Nichols noted the size of the deals as being āsomewhat impressive.ā

Roche is paying more than $1 billion upfront for the rights to Sarepta Therapeuticsā Duchenne muscular dystrophy (DMD) gene therapy outside of the US.

Genentech entered a $300 million with Adaptive Bio for access to its T-receptor discovery and immune profiling platform, though the deal could be worth up to $2 billion.

And Vertex, as previously mentioned, inked a $175 million deal with CRISPR Therapeutics for its gene therapy pipeline.

2) More fuel to the fire for Big Pharma

But Rocheās $4.8 billion acquisition of Spark Therapeutics ā which has already seen commercial success with Luxturna ā was also significant, as was Biogenās $877 million purchase of Nightstar Therapeutics, Pfizerās stake-in and option to buy out Vivet, and Bayerās acquisition of the remaining shares of BlueRock Therapeutics.

āThese signal that Big Pharma is optimistic to M&A in the advance therapy space and the value that these therapies can bring,ā said Nichols.

The business model for this new breed of curative medicines is significantly different to that of traditional pharma and biologics, and patient access poses a challenge. With the arrival of Zolgensma and its $2.1 million price tag, the conversations have changed, and all elements of the industry have been forced to address how to manage patient access.

Zolgensma represents a life or death drug for 68% of pediatric patients with SMA1. The patients must be dosed before the age of two, yet only around ten states offer screening before this age.

āWe need to work as an industry to ensure reimbursement and access is in sync with approvals,ā said Nichols. However, she added, āwe must move the conversation to state levelā and bring state Medicaid and insurance companies to the core of the conversation.

The year saw positive signs that change is happening.

Nichols noted that āpatient advocacy voices are loudā across all disease indications pushing for access to these next-generation medicines. Meanwhile Novartisā suggested lottery-style free drug program ā despite some criticism ā demonstrates industry itself is looking for innovative ways to improve access.