In what has become a highlight of PhacilitateŌĆÖs Advanced Therapies Week, Susan Nichols, chief business officer at ViroCell Biologics, highlighted 10 events from 2022 that drove conversation, investment, and innovation in regenerative medicine.

She told delegates in Miami, Florida the past 12 months saw ŌĆ£the highest of the highsŌĆØ in the cell and gene therapy space, with a slew of long anticipated approvals, including for indications outside of oncology and rare disease, as well as signs industry is ŌĆ£finally getting into the larger patient populations that we’ve spoken about for years.ŌĆØ 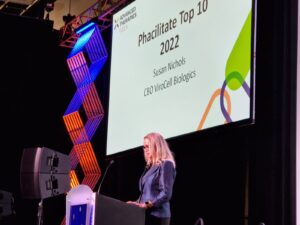 However, Nichols noted it would be remiss not to mention the many lows of the year, citing investments down 44% from 2021, record layoffs in the space, Big Pharma departures, regulatory agencies struggling to keep up with the speed of innovation, and continued supply chain shortages.

And it was one of the more negative elements of the industry that took the top spot: limited patient access post-approval. The approval of BluebirdŌĆÖs gene therapy Zynteglo in August took drug pricing to a new high with a list price of $2.8 million, trumped only by CSL BehringŌĆÖs Hemgenix (etranacogene dezaparvovec), approved in November with a price of $3.5 million.

With the science of advanced therapies proven and industry bracing for another year of cutting-edge approvals, ŌĆ£wouldnŌĆÖt it be a shame to develop life-saving medicines no one can afford,ŌĆØ said Nichols.

The top spot in 2021 focused on advancements in line of treatment for CAR-Ts, with the likes of Yescarta (axicabtagene ciloleucel) and Breyanzi (lisocabtagene maraleucel; liso-cel) going from a fourth or fifth line to a second-line standard of care.

The full top 10 cell and gene therapy milestones for 2022 can be found in reverse order below:

ŌĆ£Big Pharma is investing to expand future use, relying on external innovation for the next generation pipeline, and to overcome manufacturing bottlenecks currently experienced,ŌĆØ she explained.

ŌĆ£Bio bucks allow shared risk and reward and we saw a whole lot of collaborations, which show a strategic commitment on behalf of Big Pharma to ensure that the technology is funded with the possibility of clinical success.ŌĆØ

ŌĆ£First, this is a solid tumor therapy, with over half the patients seeing no signs of cancer after one year. Second, it’s a gene therapy in the oncology arena. Third, this is one of the most prevalent cancers,ŌĆØ she said, with 600,000 patients in the US alone currently under care for bladder cancer.

ŌĆ£That potential sets a precedent and paves a pathway for gene therapy approach to solid tumors.ŌĆØ

Yes, funding fell in 2022 across the board but the CGT space found nontraditional ways to ensure continued R&D.

One example was raising funds through selling Priority Review Vouchers (PRV): Bluebird Bio received $102 million from Argenx, while Bridge Bio made $110 million by selling its PRV to an undisclosed buyer.

7) Hemophilia A and B drug approvals

ŌĆ£What I really find a signal of what’s to come is insurers approved a Ōé¼1.5 million [($1.6 million)] reimbursement [for Roctavian] based on cost savings and value,ŌĆØ she said. ŌĆ£This is game changing.ŌĆØ

Nichols reeled off a list of notable Big Pharma CGT investments, acquisitions, and partnerships in 2022, including:

ŌĆ£This is proof and point that Big Pharma is willing to pay for the risk assets. It points to the runway, to industry maturity, as data is benchmarked against other approved therapies. Mergers, acquisitions, partnerships, and collaborations reign.ŌĆØ

ŌĆ£The good news is we finally have therapies that treat the larger patient populations. We’ve been waiting for this ability for a long time.ŌĆØ

However, the ŌĆ£stunning response rateŌĆØ and higher patient population means demand is far greater than supply. Carvykti, for example, is only available in a limited number of hospitals while Janssen scales up production capabilities.

4) Leveraging trailblazers’ prior experience and scale

The pioneers in the space are using their experience to bring more CGTs through the clinic, said Nichols. For example, 2022 saw GileadŌĆÖs Kite both acquire Tmunity Therapeutics ŌĆō adding an ŌĆśarmoredŌĆÖ CAR-T technology platform among other assets ŌĆō and take a 50% stake in a cancer drug being developed by US biotech Arcellx. Kite will be responsible for the manufacturing.

Meanwhile, Novartis (with Kymriah under its wing) struck a deal to make a macrophage-based cell therapy targeting breast cancer for Carisma Therapeutics from its Morris Plain, New Jersey site.

ŌĆ£We’ve been talking about this for what seems like forever,ŌĆØ said Nichols, referring to the approval in Europe of AtaraŌĆÖs Ebvallo (tabelecleucel). The product is the first and only treatment for rare blood cancer EpsteinŌĆæBarr virus positive postŌĆætransplant lymphoproliferative disease (EBV+ PTLD).

This could open the floodgate for more allogeneic products, including GamidaŌĆÖs hematopoietic stem cell (bone marrow) transplant for patients with blood cancers, which has a PDUFA date of January 30 in the US.

Yescarta went head-to-head against the standard of care for large B cell lymphoma (hematopoietic stem cell transplant) and proved its worth. As such, patients are now able to start on Yescarta after failing first-line chemo or relapsing within 12 months of chemotherapy.

ŌĆ£This sets a precedent to move part of the treatment paradigm to earlier intervention,ŌĆØ said Nichols. ŌĆ£It also expands access to a larger patient population which often makes it more profitable for Big Pharma and more willing to invest in the sector.ŌĆØ

Nichols ended on a sour note. ŌĆ£Sustained sustainable access and reimbursement are the goal,ŌĆØ she said, and 2022 showed we are a long way from achieving this.

She described Europe as approaching a crisis, with seven out of 24 approved products withdrawn. Reimbursement policies have caused Bluebird Bio to exit the market after failing to reach agreements with European authorities over the prices of its gene therapies. Meanwhile, out of the 254 clinical trials initiated last year, only three were initiated in Europe.

The US fared slightly better, but Nichols pointed out the regulatory structure is still based on a maintenance drug model and will not cope with the impending deluge of CGTs.

Thus, ŌĆ£modernization is crucial to patient access,ŌĆØ she told delegates. ŌĆ£Let’s make it easier. Our drugs are only effective when patients receive benefit. Not just a specific geography or socio-economic subset but access for all, including those that must cross borders to receive treatment.

ŌĆ£As an industry, I call for us all to stay focused and flexible.ŌĆØ