Bavarian Nordic has supplied volumes of its smallpox vaccine for personnel involved in the treatment of two UK patients diagnosed with monkeypox.

At the time of going to press, two patients have been diagnosed with the potentially fatal but rare disease monkeypox in the United Kingdom. Both are believed to have contracted the disease in Nigeria, where there has recently been a monkeypox outbreak.

While there is no specific treatment or vaccine for the viral zoonotic disease, Public Health England (PHE) has contracted Danish firm Bavarian Nordic to supply small volumes of its EU approved smallpox vaccine Imvanex (also known as Imvamune). 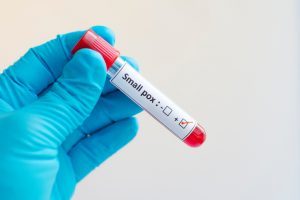 Bavarian Nordic has supplied its smallpox vaccine to prevent healthcare staff in the UK against monkeypox. Image: iStock/jarun011

â€śUpon request from the authorities, we have supplied a smaller number of doses required for ring vaccination of personnel directly involved in the treatment and care of the infected subjects,â€ť Bavarian Nordic spokesperson Thomas Duschek told BioProcess Insider.

â€śImvanex is approved in the EU for the prevention of smallpox, and we only sell the vaccine within its approved label. But in special circumstances, a respective government health authority can issue an exceptional approval for their own use,â€ť he explained.

â€śWe still sell within our approved label but the respective government take a deliberate decision to use it outside regulatory label.â€ť

Additionally, he continued, the firm has seen orthopox cross protection in its clinical studies submitted as part of the EMA approval process, and the rationale behind treating monkeypox with a smallpox vaccine is a 95% overlay of these various pox types.

Imvanex is a live, attenuated virus grown in cell lines derived from chicken eggs. The vaccine is made at Bavarian Nordicâ€™s large-scale facility in Denmark, originally purpose built to produce Imvanex.

â€śThe facility is scalable and already capable of producing at large-scale,â€ť Duschek said. â€śThe lead time for our product is though fairly long and requires detailed planning and resource allocation, which is agreed upon with our customers.â€ť

Thus while responding to a large, sudden outbreak is â€śnot something we are able to do overnight,â€ť the firm does maintain â€śa small stock of readily available vaccines, which can be deployed in emergency situations, like the one last week in England.â€ť

Since beginning operations, the facility has expanded to include other products, including vaccines for the firmâ€™s own clinical trials. And recently the firm secured a loan to support construction of a fill/finish facility at the site.

â€śWe are currently expanding the facility to include a filling line with ability to lyophilize the vaccines, which is part of the contract framework with the US Government to ensure their future vaccine stockpile,â€ť said Duschek. â€śThe current formulation of the vaccine is liquid-frozen, which is the type approved and currently being supplied. This formulation is being filled by a contract manufacturer.â€ť