The technology in question – called the Pin Point system – is an editing platform that allows developers to precisely modify DNA at the base-level.

The approach differs from CRISPR/Cas9 and other conventional editing techniques that create cuts in genes, which could result in unintended changes and lead to deleterious effects in patients Horizon says. 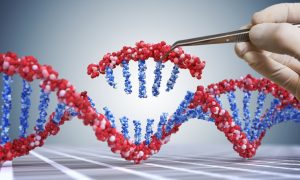 The firm will offer base editing as part of its gene editing platform.

According to Jonathan Frampton, the firm’s corporate development partner, “The technology could have a significant impact in enabling cell therapies to be progressed through clinical trials and towards commercialization.”

He also told us the plan is to market the technology to firms with therapies in early phase development, explaining “it would be very difficult to change the process late post-IND.”

Shengkan emphasized base editing’s potential, commenting that, “The cytidine deaminase version of the technology alone could potentially be used for developing cell therapies such as gene modified cells for sickle cell anemia and beta thalassemia, HIV resistant cells for AIDS, over-the-shelf CAR-T cells for cancer, and MHC-compatible allogenic stem cells for transplantation.”

The approach also has application in the development of gene therapies for inherited diseases like antitrypsin deficiency and Duchenne muscular dystrophy Shengkan said, adding the plan is to use it to tackle major areas of unmet need.

“We intend to take full advantage of the unique modularity and versatility features of Pin-point platform and develop efficient gene inactivation agents for potential treatment of many devastating diseases where the leading causal contributing factors are well defined.

“At the top of this disease list are Alzheimer’s disease, amyotrophic lateral sclerosis, and familial hypercholesterinemia,” he said.

Horizon partnered with the developers last year in an agreement that saw it fund research in base editing at the University. The deal also allowed Horizon to carry out its own evaluation and proof-of-concept studies.

Horizon said it has established programs designed to accelerate the clinical uptake of this technology and is now seeking partners to assess and shape development of the base editing platform.