The adoption of viral vector technology in cell and gene therapy has led to six month waiting lists for multilayer culture vessels. Hyperstack vendor Corning says it will more than double its manufacturing capacity to deal with the demand.

Despite being a registered brand owned by Corning Life Sciences, ‘hyperstack’ has become a common term to describe multilayer, scalable, and single-use culture flasks. They are used to produce viral vectors and gene therapies, and are in huge demand, according to Reinout Hesselink, an expert on cell and gene therapies and a consultant at eXmoor Pharma Concepts. 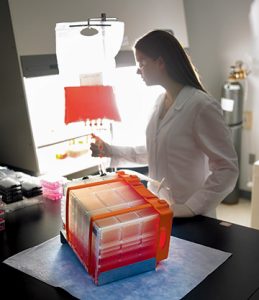 He told BioProcess Insider a surge in gene therapy development has led to shortages and long waiting lists – “one client said it was six months” – furthered by a lack of capacity from the only two vendors producing such products: Corning and Nunc (part of Thermo Fisher Scientific).

“There is an increase in the number of gene therapies getting to later-stage development that use hyperstacks in their processing, and vendors can’t keep up,” he said.

Spun out of academia, gene therapies have traditionally been made in 175 ml culture vessels, he continued, but hyperstack systems with double-digit layers have offered industry a quick way to scale-up production.

“[Gene therapy makers] would like to scale-up into bioreactors but there is not always the time and money to do this as people want clinical results as soon as possible, and therefore use increasing numbers of hyperstacks to scale out.

“But from Phase II onwards they are locked into the manufacturing process, and therefore the only way to scale-up further is to increase the number of hyperstacks again.” 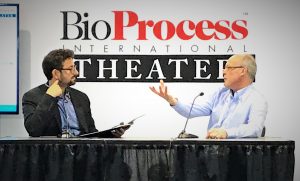 Fujifilm uses as many as 50 hyperstacks per batch of product, and therefore the firm pays “a lot of attention to the supply chain,” he told us, “because we become very dependent on them.”

“Currently hyperstacks are a real issue for us and for other people around the industry, which I think just speaks a little bit to this explosion of early phase manufacturing.”

Topping added the sudden surge has taken the vendors “as much by surprise as anyone else,” though Hesselink said he believes a similar shortage a few years back driven by increased interest in mesenchymal stem cells (MSCs).

Chris Ward, a spokesperson from Corning, said his firm is alert to the “rapid adoption of viral vector technology in cell and gene therapy,” which has caused the shortage.

“Despite our longstanding active project to increase production capacity, the pace of orders has exceeded our current production rate.” 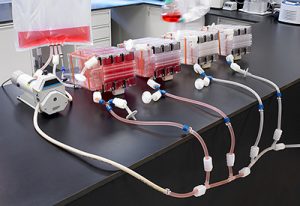 Corning’s Hyperstack products are made at its facility in Kennebunk, Maine, and while Ward did not disclose information on production volumes, he confirmed the plant is “running at full capacity seven days per week.”

Furthermore, Corning is looking to alleviate the shortage through several capacity expansions. These include qualifying a second source for gamma sterilization, optimizing its current operations, and adding a new production line, which it anticipates will be validated and operational during Q1 2019.

“These plans are intended to more than double the current manufacturing capacity,” said Ward. “Also, we are committed to developing additional capacity within the next few years to be able to meet future demand.”

Nunc owner Thermo Fisher declined to comment on the hyperstack shortage when contacted by BioProcess Insider.