Scott Gottlieb will step down from his position as commissioner of the US FDA next month. He issued more cell and gene therapy guidance in his two-year tenure than had appeared in the previous ten.

In May 2017, the US Senate confirmed Dr Scott Gottlieb as commissioner of the US Food and Drug Administration (FDA). This week, nearly two years on, and Gottlieb announced he is to step down from the role in the next month.

Among Gottlieb’s achievements are the numerous cell and gene therapy guidance documents published under his watch, along with personal statements from him and Peter Marks, the Director of the FDA’s CBER, aimed at supporting an industry predicted to yield 10 to 20 approvals a year from 2025. 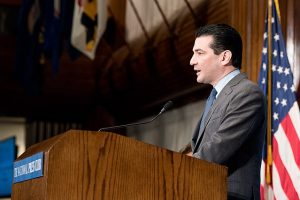 Scott Gottlieb will step down next month from his role as FDA commissioner. Image c/o US FDA/wikimedia

He also led a proactive clampdown against unapproved and unregulated stem cell treatments and the “bad actors” that offered such services. “I’ve directed the agency to vigorously investigate these kinds of unscrupulous clinics using the full range of our tools, be it regulatory enforcement or criminal investigations,” Gottlieb said in August 2017.

Reining in the rogue clinics

“A November 2020 deadline for compliance was set, but with no obligation to wait that long he followed up in December 2018 by sending twenty strongly worded letters to firms who should have been engaging with the FDA but weren’t.”

However, Davies told us “this is just the tip of the iceberg,” as “the USA and other countries are flooded with such bogus organizations, many trying to fool consumers with official sounding buzz words and claims which euphemize and skirt the law.”

Paul Knoepfler of the University of California has compiled a database listing 350 US businesses marketing stem cell interventions directly to consumers, and this is by no way a comprehensive list, said Davies.

As such, “today was a great day for rogue stem cell clinics,” Davies said. “If tomorrow is to be a worse day for these entities, a worthy successor to Scott Gottlieb as Commissioner of the FDA should be appointed as soon as possible.”

The worry is that Gottlieb’s departure will deflate the momentum of these enforcement actions, he continued, adding that a more libertarian successor might reverse the process.

Gottlieb did not reveal the reasons for stepping down but CNN has suggested he is leaving to spend more time with his family.

In a resignation letter to staff, he wrote: “Over the past 23 months, I’ve been privileged to work with an outstanding team at the Food and Drug Administration, and to collaborate with the professional staff on the implementation of many meaningful initiatives that have advanced the public health,” Gottlieb wrote in his resignation letter.

“I’m fortunate for the opportunity that the President of the United States afforded me to lead this outstanding team, at this time, in this period of wonderful scientific advances. I’m deeply grateful for your support and the support of the President and his team in advancing many critical public health goals.”

President Trump honored Gottlieb’s contribution in his preferred mode of communication, the Tweet:

“Scott Gottlieb, who has done an absolutely terrific job as Commissioner of the FDA, plans to leave government service sometime next month…. Scott has helped us to lower drug prices, get a record number of generic drugs approved and onto the market, and so many other things. He and his talents will be greatly missed!”