Over 20 cell and gene-based therapies are expected to be filed or to receive approval decisions over the next 18 months, according to the Alliance for Regenerative Medicine (ARM).

Earlier this year, the US Food and Drug Administration (FDA) laid out its action plan to deal with the large upswing in the number of investigational new drug (IND) applications for cell and gene therapies it is receiving.

â€śThe FDA commissioner has anticipated that he thinks there will be between 10-20 cell and gene therapies by 2025 every year, so this big pipeline that we are generating is definitely starting to produce results,â€ť Janet Lambert, CEO of the Alliance for Regenerative Medicine (ARM) said at Biotech Week Boston. 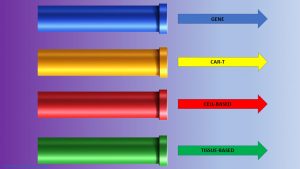 Cell and gene therapies moving through the pipeline

The industry advocacy group keeps track of cell and gene therapy pipelines and said that next year could preempt the FDA’s prediction and see a gush of regulatory submissions and several approvals.

Novartis/AveXisâ€™ Zolgensma (onasemnogene abeparvovec) is awaiting EU and Japanese approval, having already won US approval in May). Meanwhile, PTC Therapeutics and Bluebird Bio are expected to file their gene therapies â€“ GT-AADC and Zynteglo (autologous CD34+ cells encoding Î˛A-T87Q-globin gene), respectively â€“ in the US, and Biomarin is likely to file its hemophilia product Valrox (Valoctocogene roxaparvovec) in the US and Europe before the end of the year.

In 2020, she said it is likely there will be another six gene therapy filings across major markets from Gensight Biologics, Audentes Therapeutics and Orchard Therapeutics.

â€śThese things have a way of moving around but still thatâ€™s 12 gene therapies filings or decisions weâ€™re expecting in the next 18 months.â€ť

There are also at least seven companies (and eight products) vying to file cell-based immune-oncology therapies in Europe or the US between now and the end of 2020, she said, based on company announcements. The firms, in the expected order that they will file, are: Bellicum Pharmaceuticals, Atara Biotherapies, Celgene, Bluebird Bio/Celgene, Kiadis Pharma, Poseida Therapeutics, and Iovance.

â€śThe range of indications targeted range from blood cancers, myeloma, melanoma, cervical cancer,â€ť she said, â€śand many of these therapies are showing the same kind of outstanding clinical trial results that we showed in [recently] approved therapies.â€ť

A further three cell therapies â€“ San Bioâ€™s SB263, Mesoblastâ€™s Remestemcel-L, Mesoblast/JCRâ€™s Temcell â€“ and three tissue-based therapies could also either be filed or receive a regulatory decision in the next 18 months.

These are just the near-term anticipated filings and approvals, as the ARM has tracked a total of 1,069 regenerative medicine clinical trials currently ongoing. 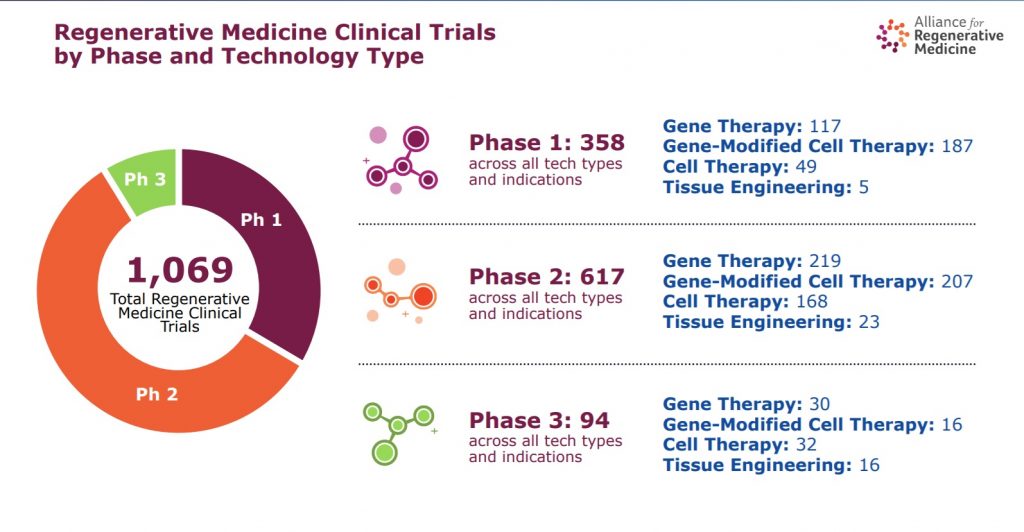 According to Lambert, this breaks down in the following way across all tech types and indications: 358 in Phase I, 617 in Phase II, and 94 in Phase III. Nearly 40% of these are gene-modified cell therapies, and close to 30% are gene-delivered or gene-edited products.

When broken down into therapeutic area, it is no surprise that around half of all current clinical trials are in oncology, though the rest of the trials are addressing a broad range of areas from Central Nervous System disorders to hematology to respiratory diseases.

Out of 187 respondents, 60% said their company is focusing on oncology. And just over 40% said they are developing CAR-T products.

4 thoughts on “In the pipeline: Surge of cell and gene therapies likely in 2020”