Plasma is essential to the manufacture of immunoglobulin therapies for certain rare immunological diseases. Shire, which prides itself on orphan and hemophilia drugs, has more than 100 plasma collection centers in the US and Austria and has further expanded its presence through the acquisition of sanaplasma AG.

“The transaction was an acquisition of 100% of sanaplasma AG,” Shire spokesperson Paris Barker told BioProcess Insider. 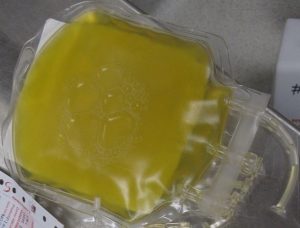 Shire has upped its plasma presence through the acquisition of sanaplasma AG. Image: By DiverDave [CC BY-SA 3.0 (https://creativecommons.org/licenses/by-sa/3.0) or GFDL (http://www.gnu.org/copyleft/fdl.html)], from Wikimedia Commons

“This includes its two operating subsidiaries, sanaplasma s.r.o. in Czech Republic and sanaplasma kft in Hungary, which operate 14 plasma collection centers across the two countries.”

Shire did not disclose the financial terms of the transaction.

The Switzerland-headquartered firm will be integrated into Shire’s BioLife plasma collection business.

“The plasma collected at BioLife Plasma Services is processed into a wide variety of life-saving therapeutics that benefit thousands of people every day,” Barker explained.

The amount of plasma needed per batch varies by product and manufacturing process, she continued, adding: “The acquisition of sanaplasma AG will extend long-term plasma supply in support of Shire’s growing Immunology business.”

For the full year 2017, Shire’s immunology franchised represented $4.4 billion, over a quarter of the Biopharma’s entire business.