Increased titers are driving the need to move to semi and fully-continuous processing in the downstream, UCB’s Stefanos Grammatikos told BPI Europe delegates.

In efforts to intensify bioprocesses and accelerate development, industry has traditionally looked to increasing titers. Since the early days of biomanufacturing thirty years ago, titers have risen from less than 0.5 g/L to mid-to-high single-digits.

However, some firms claim they are able to drive titers far higher, either through the use of non-mammalian expression systems (in the cases of AbSci and Dyadic, for example) or by using continuous and large-volume single-use processes as recently demonstrated by WuXi Biologics, which claimed to have achieved cell culture productivity for an Fc-fusion protein of 51 g/L. 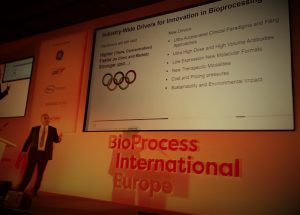 Furthermore, certain processes could push titers towards 100 g/L in the next few years, a delegate at the recent BPI West conference claimed.

The mess that follows…

But speaking at the even more recent BPI Europe meeting in Vienna, Austria last week, Stefanos Grammatikos, head of Biotech Science at UCB Pharma, warned that with large titers come large problems in the downstream.

“We hear about cell culture and how process intensification can bring really high titers. However, we don’t talk as much about the mess that follows that cell culture process,” he told delegates.

This, he continued, all leads to issues further along the process in the downstream.

“We see conventional disk-stack centrifuges which cannot cope with the cell mass.” This is driving efforts from the industry providers of centrifuges to move from intermittent discharge to continuous discharge centrifugation, he said.

“We also see filter blockage, and there is a need for huge clarification filter areas downstream of centrifuge.”

Other issues caused by high titers include the antibody reduction events around the harvest which are transient but sometimes irreversible and can be catastrophic for the molecule. Furthermore, capture step/affinity chromatography issues “can lead to resin damage and cleanability issues,” and push loading capacity limitations.

“So overall, if you go beyond the 2,000L scale we have this scalability issues, yield losses, efficiency loss in manufacturing. We see product quality issues; issues with chromatography and high resin costs, and an overall need to move towards semi-continuous and fully continuous downstream processes.”