There is huge demand for customizable raw materials says newly-named Actylis, as it targets further M&A to propel itself into the bioprocess space.

In 2019, raw material and ingredient distributor Aceto was acquired by private equity (PE) firm New Mountain Capital. Since then, the firm has moved away from being a virtual supplier via an M&A strategy that has seen seven acquisitions within a two-year period. 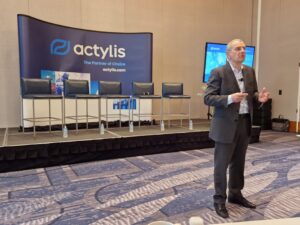 â€śWe were a distributor, but now we are a manufacturer and an R&D organization,â€ť CEO Gilles Cottier said at a press event during Biotech Week Boston. â€śAcquiring seven companies has meant we have established ourselves as a powerhouse.â€ť

The buying spree added seven manufacturing facilities and grew revenues 8% year-on-year, with the firm ending 2021 with $560 million sales. However, the rapid growth forced the firm to integrate a total of 11 different business units from eight subsidiary companies, bringing together 4,000+ products and 850 staff. As such, the firm has rebranded itself under the name Actylis.

While still active across a range of industries â€“ specialty chemicals, cosmetics, nutrition, agriscience, etc â€“ it is the â€ś$7 billion addressable biopharma marketâ€ť that Cottier said his firm is keen to focus on, increasing its presence through further M&A to establish itself as a major specialty raw material and customized ingredient manufacturer and developer.

This will help fulfill the â€śhuge demand for customized raw materials.â€ť However, for now the strategy remains to grow the material side, with a focus on critical raw materials for upstream and downstream, including making amino acids, lipids, and buffers. â€śI donâ€™t want to be everything for everybody,â€ť he said. â€śA one-size-fits-all approach does not work for this industry.â€ť