Terumo Blood and Cell Technologies (BCT) has launched the Quantum Flex Cell Expansion System, saying healthier cells and scalability are among the benefits the bioreactor platform will bring to cell and gene therapy makers.

According to the firm, the Quantum Flex system was based on industryâ€™s need for earlier automation to potentially limit additional and time-consuming steps such as bridging studies and technology transfers. Furthermore, the system allows developers to complete early process development on the same platform they will use for manufacturing.

The automated and closed cell expansion system aims to progress autologous and allogeneic applications, as well as viral vector and exosome production, across multiple bioreactor sizes, allowing for process efficiencies in batch size. 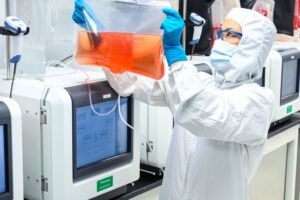 Terumo worked with four customers in its early adopter program to pilot the system. Matthew Durdy, chief executive of the Cell and Gene Therapy Catapult â€“ one of the four â€“ described the platform as â€śkey to the continued success of the highly specialized CGT [cell and gene therapy] industry,â€ť representing â€śanother advancement which will help streamline processes and accelerate the manufacturing process, making it easier for developers to bring therapies to market.â€ť

BPI: How does the Quantum Flex Cell Expansion System work?

BPI: Why is hollow fiber perfusion technology important for cell expansion in bioreactors for CGTs?

DM: Hollow fiber perfusion technology is an optimal technology to culture cells. The semipermeable fibers facilitate exchange of culture media, which is fluid that nurtures and perfuses cells.

The membrane fibers have inner lumen diameter of about two hundred micrometers and wall thickness of only fifty micrometers, making them well suited to efficiently remove cell waste and transport nutrients, during the cell culture. The cell expansion system can support expansion of both adherent and suspension cells. The system can also be used for exosome and viral vector production.

The system utilizes a dual-compartment bioreactor to perform continuous perfusion. For suspension cells such as T cells, complete media with cytokines, is utilized for the intra-capillary loop, where the cells are cultured. The nutrient feeding, waste removal, and gas exchange are accomplished using the base media on the extra-capillary loop. In summary, the system provides and maintains a consistent and controlled micro-environment for the cells in culture.

BPI: Are there other similar technologies available to CGT makers, and how does Terumoâ€™s differ?

DM: Other bioreactors grow cells in bags or stir tanks. Terumoâ€™s unique perfusion microenvironment fosters growth of healthier cells with improved access to fresh media and oxygen, which is ideally suited for cell therapy. Our hollow fiber technology allows developers to use smaller volume of reagents â€“ this provides a cost savings and simplifies the downstream processing.Â  In addition, for customers working with adherent cells, such as PSCs, our system does not require the use of microcarriers

BPI: You named CGT Catapult as a customer on the early adopter program. Who were the other three and what feedback did they give that drove this technology?

These accounts, in addition to other KOL and customer feedback, provided insights on product and process use across different applications that demonstrated uses in process development, scaling up, scale out and seed train development for both adherent and suspended cell types.Â  Overall, their feedback enhanced how we train customers on the product and how we can have further discussions about Quantum Flex.

BPI: What is the impact this technology could have on the future of CGT?

DM: Firstly, the system provides a technology to produce healthier cells, with a fast cycle time to achieve timely delivery to market, and ultimately to patients.Â  Secondly, the new scalable platform will allow therapy developers to continue the development of their cell product from process development through to commercialization using the same hollow-fiber technology.