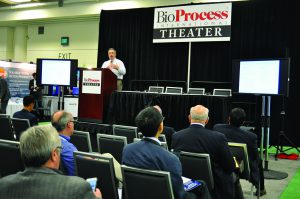 Most recent innovations improving efficiency have been on the upstream side of biomanufacturing. On the downstream side, bottlenecks usually occur at the chromatography step. Chromatography is such a powerful tool in purification that bioprocessors simply cannot do without it. CMC Biologics is introducing multicolumn chromatography (MCC) to help solve this bottleneck.

Batch chromatography involves a number of steps ŌĆö equilibrate a column, load it, wash it, elute it, and clean it ŌĆö and each step takes time. Traditionally, companies underload columns to prevent losing too much valuable product in purification. In MCC, two columns are connected, with the second column following the primary to capture product that might escape it. Once the first column is loaded, technicians can take it out of line and process it while connecting a third column to the second column and continuing chromatography. They can keep on going while removing loaded columns and replacing them with fresh ones. Because a column is always being loaded (no dead time), they donŌĆÖt have to worry about losing product to rapid loading because the second column in line will always be there to capture it.

For commercial applications, all binding sites can be loaded in the first column because of that benefit. Losing one gram of product translates to losing tens of thousands of dollars. To prevent that, traditional chromatography might use only 60% of available binding sites. With MCC, CMC Biologics can use its resins more efficiently. The company uses software from Pall that maps out a system to minimize the amount of resin needed. The process development team has seen good correlation between simulated results and what actually occurs during production.

CMC Biologics performed a study using five columns that were 20 cm in diameter. During one day of operating time, multiple columns processed twice as much product as batch chromatography would have. With multiple columns, the residence time was one minute rather than three minutes for a batch process. The team reduced its use of protein A from 60 L to 11 L.

In a second example, the team used six columns in MCC mode and cycled them 15 times. In this scenario, batch chromatography would have cycled only four times and cost close to a million dollars in protein A resin alone. With MCC, the team spent only US$200,000 on resin (about a 75% decrease in cost). Working with the Pall MCC system provides the potential to use up to eight columns

An alternative to resins is to use cation-exchange (CEX) or anion-exchange (AEX) membrane adsorbers to implement a totally disposable (single-use) technology. With membrane chromatography, technicians can load a significantly higher amount of sample relative to resins, and that provides a cost benefit. Whereas you can load 150 g/L on resin, with membranes you can load up to 2,000 L and get comparable yield and product quality, resulting in a $90,000 savings.

CMC Biologics is excited to offer innovative technologies that provide a cost effective means to implement single-use technology in downstream processing. Columns can be cycled rapidly without limiting performance, allowing downstream processors to use significantly less resin in more cycles.