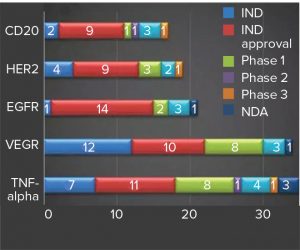 In the past decade, the world has seen rapid growth of more than 15% in China’s biopharmaceutical market (1). According to the second edition of BioPlan’s Advances in Biopharmaceutical Technology in China, the most populous country in the world — with the largest patient groups — has a growing economy with its GDP second only to that of the United States. Rapid urbanization and greater access to national healthcare insurance puts China in second place after the United States for the largest market for pharmaceuticals — $122.6 billion in 2017 (1). With its surging middle class and increasing demand for medicines, the country is expected to sustain rapid growth throughout the next decade.

Although chemical drugs and traditional Chinese medicine both are experiencing robust expansion, it is the development of biosimilar therapeutics, especially for monoclonal antibody (MAb) therapeutics, that is especially impressive. According to our study, China’s biologics sales, which were at about $9.5 billion in 2012 with a compound annual growth rate (CAGR) of nearly 25%, are projected reach $50 billion in 2021. In 2012, MAb sales in China were well under $1 billion but are projected to increase to more than $4 billion by 2021 with a CAGR of 25%.

A Spike in MAb Therapeutic Development
For a country that launched its first locally made MAb therapeutics as recently as 2005, China is experiencing a spike in MAb drug development. More than 250 such therapeutics are under clinical development there, with CD20, HER2, EGFR, VEGF, and TNF-alpha currently the hottest targets (Figure 1) (1). This wave of therapeutic development was initiated only about a decade ago, and most developers started their MAb development projects within the past five years.

Regulatory authorities in China have started giving green lights to this wave of MAb projects. Since the beginning of 2019, three PD-1 MAb therapeutics made by domestic Chinese companies have been approved there. And the peak has yet to arrive. New investments are still coming into this sector. In February 2019, China Antibody completed a round of pre-IPO financing with hundreds of millions of renminbi (RMB) (2), and hardly a month passes without news about new companies being founded with a focus on MAb therapeutics.

BioPlan’s study shows that industry insiders expect China to see double-digit numbers of MAb therapeutics in the next five years from domestic companies receiving biologics license applications (BLAs), with an optimistic projection at more than 50 therapeutics. 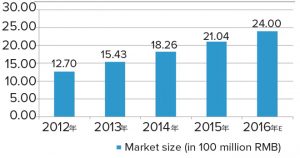 The robust growth of this industry segment brings unique demands for bioprocessing in China. In the next five years, demands for new bioprocessing capacity certainly will be higher than they are today, with an additional bioreactor capacity of >100,000 L needed to keep pace with demands. As a result, many domestic biopharmaceutical companies, especially those with MAb therapeutics on the market or late in clinical stages, have built or expanded their bioproduction lines or have plans to do so in the near future. Among those companies with larger facilities under construction are Hisun Pharma, Henlius Biotech, BeiGene, Hualan Biologicals, and Guilin Sanjin.

The expansion of bioproduction facilities has boosted demand for bioprocessing supplies; revenue from such purchases almost doubled between 2012 and 2016 (Figure 2). Many of the newly built bioproduction sites are equipped with state-of-the-art facilities, and new technologies, such as single-use systems, are becoming increasingly popular with domestic biomanufacturers.

Although the current decade is certainly a golden period for both China’s biopharmaceutical and bioprocess industries, challenges remain. In a recent BioPlan internal study, we asked respondents to “consider what China’s biopharmaceutical companies lack today to be competitive globally in a good manufacturing practices (GMP) environment.” The survey was intended to identify attributes and capabilities that Chinese biopharmaceutical executives believe they must acquire to compete effectively in a global industry.

We then asked which top five attributes were most important for the future competitiveness of Chinese biologics in markets requiring current good manufacturing practice (CGMP) manufacture. Almost 70% of China’s biopharmaceutical managers responded that the country’s “overall ‘quality’ image” is a key weakness and remains an impediment to competition in the global market. The top attributes that China’s biopharmaceutical manufacturing community selected for improvement are the country’s

Although many domestic biopharmaceutical companies now have returning scientists to lead their R&D work, the shortage of scientific/technical expertise is unlikely to be solved quickly. Most returnee scientists working in China’s biopharmaceutical industry are researchers with little understanding of or experience with GMPs and aspects of quality management, especially with product development and commercialization. Domestic companies have difficulties recruiting such talents directly from industrialized countries.

Because most MAb developers in China do not have successful histories with that category of therapeutics, they need to hire experts with compliance track records — also in short supply in China. This overall lack of experience in bioprocessing remains crippling for hundreds of biopharmaceutical companies there that want to move early stage drug candidates toward commercial successes. It is partly responsible for the failed transition of many leading R&D companies into clinical manufacturing and commercial operations. The low success rate in turn is jeopardizing the prospect of the recent R&D boom and the plan to turn ideas into life-saving therapeutics for the 1.4 billion Chinese citizens.

Apart from lack of experience, the rapidly changing regulatory environment also is a challenge for many domestic companies. The very first Chinese pharmacopoeia was put into effect in 2010 but quickly became obsolete with the global transformation of the pharmaceutical quality system brought on by implementation of ICH Q10. The second version of the Chinese pharmacopoeia was made effective by December 2016 and reflected revolutionary quality management concepts first adopted in the United States and European Union just five years earlier. Starting in 2016, the Chinese FDA (CFDA) — now known as the National Medical Product Administration (NMPA) — started the most aggressive overhaul of the old drug regulatory system to date.

The NMPA’s efforts included a rapid and significant increase both in the number and qualifications of the CFDA staff and the issuance of new or revised regulatory guidelines in key areas including biosimilars, innovative drugs, new biologics, and cell and gene therapies. GMP certification, although once a premarketing requirement by the CFDA with a five-year validation period after issue, now has been abolished. Instead, under the new mechanism, regulators can choose to conduct GMP audits at any time based on a company’s ongoing performance in terms of product and GMP risks. All these policy changes, implemented in such a short period of time, obviously pose challenges for companies that want to become viable players in the increasingly globalized regulatory environment while their requisite knowledge, infrastructure, and talent are still weak.

Although still nascent, the CMO industry in China is experiencing significant growth. For example, our study notes that the segment is expected to reach US$1.4 billion in value by 2021. Some CMOs are actively increasing capacity to meet market demand. WuXi Biologics plans to have over 220,000 L of manufacturing capacity by 2021 (4), and BI Shanghai increased its capacity for contract biologics manufacturing by 2,000 L in the spring of 2019 (5). On 16 June 2019, MabPlex announced the opening of its subsidiary in Zhangjiang, Shanghai, as a step to serve outsourcing needs for process development in that region, which hosts a hub of dozens of biotechnology companies (6). WuXi Biologics announced in May 2019 that the construction of a 1.3 million ft2 integrated manufacturing center for innovative biologics has begun in Chengdu, one of the largest cities in Southwest China. The facility will house the 12th drug-substance manufacturing facility (MFG12) for WuXi Biologics.

The booming biopharmaceutical industry in China has created abundant business opportunities for contract development and manufacturing organizations (CDMOs). They have become hot targets for investors. For example, on 25 July 2016, Just Biotherapeutics, Inc., an organization dedicated to contract manufacturing of protein drugs, announced the closing of a $14M Series A2 financing round. The Bill and Melinda Gates Foundation led that financing with an $8M investment followed by $2M each from existing investors Merck, Lilly Asia Ventures, and ARCH Venture Partners (7). WuXi Biologics successfully raised HK$32 billion in 2017 through an IPO at HK main board (4).

Apart from the market authorization holder (MAH) reform that opens the door for commercial contract pharmaceutical manufacturing, local government support also contributes to the growth of contract manufacturing for the biopharmaceutical industry. In multiple cases, municipal governments have provided low land-lease rates and other forms of subsidies for CMO companies. For example, in 2018, with support of local government, WuXi started construction on a biologics manufacturing center of excellence (MFG8) in Shijiazhuang, Hebei Province. The new biologics center with 48,000 L of bioreactor capacity, one of the largest facilities in the world to use disposable bioreactors, is designed to meet global CGMP standards (4). Without such support from local government, expanding CMO capacity in China would have been difficult.

Although most CMOs in China today are focusing on domestic production, our research shows that within five years, over 85% of biologics manufacturers plan to manufacture strategically for GMP export. In our 16th Annual Report and Survey of Biopharmaceutical Manufacturing (8), we found that China is the second ranked international destination for outsourcing this year. We asked each manufacturer to “consider your facility’s current plans for international capacity expansion over the next five years (2024).” For all global respondents considering outsourcing production outside their own countries, the United States was at least a “likelihood” (by 41.1%), whereas China topped Germany this year at 29% (Figure 3). This is remarkable given that only eight years ago, China was not moving the needle at all on this question.

Domestic CMOs still are struggling to win commercial manufacturing deals from Western pharmaceutical clients because CGMP compliance remains a concern. Although some optimistic analysts project that made-in-China drugs will be as mainstream as made-in-China iPhones or toys in the future, domestic CMOs must make improvements before this becomes a reality.

How Far Will It Go?
Regulatory reforms bring good news to China’s biopharmaceutical outsourcing industry, but most domestic developers (except for the smaller ones and the startups) remain cautious about outsourcing all of their manufacturing.
In BioPlan’s recent surveys among China’s biopharmaceutical companies, results show that more than 90% of those companies already have built or still are building their own facilities. Their major concerns include quality issues/loss of control, a lack of reliable CMOs/CDMOs, a lack of commercial insurance for risk sharing, and little experience in activities related to manufacturing partnership management and auditing. Industry insiders also need clear definitions of the roles and responsibilities of MAH and manufacturing partners in legal contracts. One suggestion is for a certification system for CMOs and CDMOs.