India is well known as a key destination for bioprocess outsourcing and a major supplier of active pharmaceutical ingredients and raw materials. The global pharmaceuticals manufacturing outsourcing industry is expected to reach US$100 billion by 2015 (1). India has the potential to capture 8–10% of this industry by 2015 and become one of the top 10 global markets by value (2).

By comparison, India’s biotechnology industry (consisting of biopharmaceuticals as well as other sectors) has gained global attention only within the past five to six years. Although reports indicate that a majority of India’s industry in the next decade will continue consist of small-molecule drugs, the biopharmaceuticals market (~62% of biotech industry) will grow (1). Popular discussion among experts involves efforts that will raise the Indian biotech market to $10 billion in revenue by 2015. This is a lofty goal: India’s 2010–2011 biotech revenue was $4 billion (mainly because of innovative products and services), which is almost neglible in a global biotech industry of $180 billion (3). That global figure is set to reach $433 billion by 2015, so for India to reach the $10 billion mark in the next three years, its biotech industry will need to grow >40% year-on-year. The industry remains hopeful, however. According to a Frost and Sullivan report, the Indian biotech industry grew 33% last fiscal year from $3 billion in 2009 (4). Nonetheless, both multinational companies and domestic Indian companies continue to seek acquisitions, partnerships, collaborative programs, and other deals into innovative research and development, biomanufacturing, and clinical trials for biologics.

Scientific American recently ranked the countries of the world according to several factors for their capacity to support biotechnology innovation. The author ranked each country on a scale of 1–10 for several criteria. By comparison, the top final scores were 37 for the United States; 29 for Canada; 28 for Sweden; 27 for Denmark, Finland, and Israel; 26 for France, Iceland, The Netherlands, and Switzerland; and 25 for Belgium, Ireland, the United Kingdom. 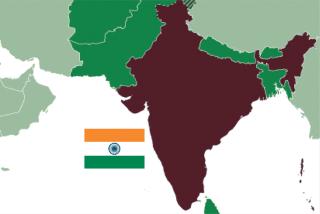 Most current revenue in India’s pharmaceutical industry comes from the manufacture of generic pharmaceuticals. But future growth opportunities include biologics, specifically biosimilars, vaccines, and regenerative medicine.

Biosimilars: About 20 Indian companies (mainly those listed in the “Leading Companies” box) are already producing biosimilars (5). A greater shift will be driven mainly by upcoming patent expiration (48 worldwide biopharmaceutical patents will expire in the next decade). India currently lacks a formal regulatory framework for biosimilars. After patents expire, insurance companies and those without coverage will be likely to target biosimilars rather than branded products. In the summer of 2010, the Indian government’s Department of Pharmaceuticals, the Association of Biotechnology Led Enterprises (ABLE), and PricewaterhouseCoopers released its document, The Vision 2020 Biopharma Strategy (5). It outlines strategies to make India one of the top five leaders in the industry, including building human capital, simplifying and changing its regulatory framework, and investing $1 billion over the next 10 years.

Vaccines: With the global vaccine market projected to value $40 billion by 2015, Indian manufacturers are seeking to compete in markets beyond those supported by the United Nations or charitable organizations such as the Bill and Melinda Gates Foundation (6). Competition with manufacturers in China is adding pressure on India. In March 2011, China received “prequalification” certification from the World Health Organization that allows approval of local vaccines for distribution to UN programs (6). Other pressures include increased regulatory scrutiny of vaccine-producing vaccines as well as high costs for recruiting and keeping a talented workforce skilled in vaccine manufacturing.

Insulin: Other research opportunities address widespread diseases such as diabetes and myocardial infarction. For example, nearly four years after Pfizer cancelled its failed Exubera inhaler, it reentered the insulin market with an October 2010 a deal with Biocon (Bangalore), Asia’s largest insulin maker. Biocon will supply Pfizer with four generic insulin products — set for commercialization under Pfizer’s brand later this year — for India, the United States, Brazil, and other developing markets.

Funding for Neglected Diseases: ~US$32.5 million

Even while India leverages capabilities in biosimilars and vaccines, it may not be enough to sustain it as a competitor beyond 2015. For that to happen Indian companies will need to be major leaders of innovation. Several challenges face India’s industry, including low healthcare spending, insufficient infrastructure, limited insurance coverage (only 10% of the population is covered; and that coverage is projected to grow to only 20% by 2015), and shortage of specialized talent (Table 1). To overcome these challenges, India’s government and its biopharmaceutical industry will need to 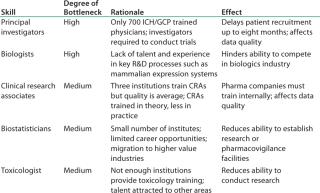 In particular, India will certainly need to address its “brain drain” situation, especially given the complexity of manufacturing biologics. Says one (anonymous) source in the biopharmaceutical industry, “Every time I go to India I see the very same people, but they are always in different companies from wherever I encountered them last. I asked them about this, and apparently the average time between job changes is about one year. People continually move around looking for the best salary, which makes investing in development of personnel resources a service to one (or eventually more) of our competitors. It should all balance out in the long run, but I personally find it unsettling.”

India’s Patents Act 1970 made pharmaceutical product innovations unpatentable in India, thereby only weakly protecting innovative pharmaceutical products. So therapeutics that had been patented elsewhere were open to be copied and marketed in India (9). The country amended its Patent Act in 2005, making its IP laws compliant with World Trade Organization’s Trade Related Aspects of Intellectual Property Rights (WTO-TRIPS) agreement.

One report summarized what that meant for India, “Indian companies can no longer ignore the patents of multinational drug companies and produce unlicensed generics, as they have done for 30 years. What Indian pharma companies hope to do instead is develop and sell around the world both licensed generics and their own branded, patented drugs” (10).

Given the increased competition in the global biopharmaceuticals market, India may need to revisit its IP laws in the next decade, specifically when it comes to enforcing compliance. As Frédéric Brunner, CEO at a-connect (a global consultancy and project execution firm) observes, “In countries where intellectual property enforcement is lower, you will see corporations more reluctant to launch novelty drugs and an increase in branded generics or generics. This can lead to negative effects on the overall market such as decreased competitiveness and limited growth and innovation. From our experience in the industry, companies often feel very comfortable launching generics and branded generics from the biologics and small molecules side, but it’s essential that they develop an integrated and cohesive strategy specifically tailored to navigate the unique challenges for each of the markets where IP enforcement is lower.”