Australia is a key global player in biotechnology investment for the Asia-Pacific region. The environment is characterized by outstanding research facilities, accelerating employment in the industry, uniquely Australian discoveries, and burgeoning alliances between Australian and international companies. Australia’s biotech companies are rapidly maturing. The country has 427 core biotech companies that are active in human therapeutics (48% of companies), agricultural biotech (16%), and diagnostics (14%) (1). Partnerships between multinationals and Australian companies and research organizations indicate growing international appreciation of what Australia has to offer.

Australia is home to a string of world-class medical research organizations, including the Garvan Institute (www.garvan.org.au), the Institute for Molecular Bioscience at the University of Queensland (www.imb.uq.edu.au), The John Curtin School of Medical Research at the Australian National University (jcsmr.anu.edu.au), and the Walter and Eliza Hall Institute in Melbourne (www.wehi.edu.au).

Australian research has helped pave the way for medical breakthroughs including contributing to the discovery of the curative effects of penicillin, invention of the cochlear implant, and establishing the link between Helicobacter pylori infection and stomach ulcers. Leading research also includes the development of synthetic Omega 3 fatty acids and gene silencing technology. Five of Australia’s eight Nobel Prizes have been awarded for work in medicine or related fields, including the 2005 award to Barry Marshall and Robin Warren for their discovery of the Helicobacter pylori bacterium (2).

Australian medical research organizations and universities excel in fields such as malaria, epilepsy, immunology, vaccine development, obesity, diabetes, neuroscience, assisted reproductive technology, molecular genetics of cancer, stem cells, and regenerative medicine. In 2006, Professor Ian Frazer was named Australian of the Year for his research that led to the development of a vaccine for the human papilloma virus, one of the main causes of cervical cancer. 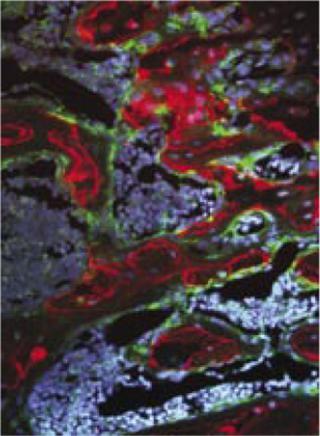 This image of adult mouse bone marrow is immunohistochemically stained for two extracellular matrix molecules, tenascin-c and osteopontin. These proteins are being studied by the Australian Stem Cell Centre. ()
Burgeoning Employment Market

Employment in the Australian biotech sector is rising rapidly, reflecting the sector’s growth. A recent survey found that Australian-based employment in core biotech firms doubled from 6,100 employees in late 2004 to at least 12,100 in late 2006 (1).

“The survey revealed that the growth is mainly due to an increase in the size of existing biotechnology companies,” explained Lyndal Thorburn, coauthor of the 2007 BioIndustry Review. “This reflects the strengthening of the Australian biotechnology sector as many companies are progressing toward later stages of drug development, and an increasing number have products on the market” (1).

The Australian Government’s is providing over US$410 million in grants to enable clinical and research facilities to improve their ability to research the causes, diagnosis, and prevention of disease. This strong support funds a number of development and expansion projects by medical research facilities and the operations of the Australian Synchrotron, including the following:

The remaining almost US$250 million is shared among 12 other research centers focusing on schizophrenia, childhood diseases, neuroscience, HIV, biomedical science, indigenous health, cancer, and more. In addition to the Australian government’s contribution to biotechnology, state and territory governments also commit substantial resources to the development of biotechnology.

Stem cell research is another of Australia’s strengths. The Australian Stem Cell Centre (ASCC) is developing a program for the treatment of serious diseases through the application of stem cells and related technologies. The national government has committed around US$90 million to 2011 for the center. In addition the Victorian state government has committed almost US$10 million in support. Partnered with nine leading Australian research institutes and universities, ASCC is a biotechnology center of excellence in search of commercial partners to achieve new research outcomes. The center maintains high standards with all documentation, processes, project management and commercial activities have adopted best practice guidelines (3).

Australia also provides a transparent and attractive regulatory environment for stem cell research, offering stability and certainty for industry and investors. Recent amendments to Australian law provide researchers with new opportunities to investigate stem cells, for developing new therapies. These amendments broaden the scope of human embryonic research that can be conducted under license in Australia, and they now permit research involving somatic cell nuclear transfer.

Australia is a richly diverse country with flora and fauna offering a wealth of opportunities in the search for medicines to cure the world’s most devastating diseases including cancer, cardiovascular disease, respiratory disease, and illnesses of the central nervous system. The US$85 million “Nature Bank” project led by Professor Ron Quinn of the Eskitis Institute for Cell and Molecular Therapies at Australia’s Griffith University (www.griffith.edu.au) — a library of more than 400,000 compounds from plants and marine invertebrates ready for drug development — is working to identify several compounds now undergoing further trials.

The institute is making the most of Australia’s and neighboring countries’ resources, collecting samples of plants and marine invertebrates from areas of tropical Queensland, the Great Barrier Reef, Tasmania, Papua New Guinea, and China. Professor Quinn stated, “Our goal is to identify and isolate exactly what the active ingredients in these medicines are and if possible synthesize it to create better drugs” (4).

In 2006, the Australian biotech sector forged more than 350 new partnerships, with almost a quarter (94) involving US organizations (1). Sydney-based Proteome Systems has agreed to collaborate with new US venture Minerva Healthcare. The licensing agreement relates to Proteome’s antiradiation and antiaging topical Eukarion compounds (5).

In May 2007, two Australian therapeutic antibody companies, Peptech and EvoGenix, announced plans to merge. The combined company, Arana Therapeutics, is one of Australia’s largest biotechnology companies, with combined market capitalization of almost US$400 million (and positioned to be a major player internationally). Human antibody therapeutic development is a rapidly developing area, with several antibody-based products already achieving sales in excess of US$840 million per year. More than half the growth in drug sales over the next five years are predicted to come from antibody products, giving the combined company confidence in the level of future income from their drug development pipeline (6, 7).

Queensland University spin-out Protagonist Pty Ltd is set to become a major force to combat costly medical conditions and benefit worldwide health. A US$10.1 million investment in Protagonist by US Lilly Ventures, Melbourne-based Starfish Ventures, and Queensland BioCapital Funds is tapping into a potential billion-dollar global market with significant social, health, and economic benefits for Australians.

Protagonist uses a cutting-edge drug discovery approach to find active molecules for difficult biological targets. Their unique approach is to combine protein structural information with combinational chemistry, resulting in the design and synthesis of molecules that mimic protein structure, ultimately leading to discovery of compounds that mimic protein function. This innovative technology allows for the development of drugs that could offer relief to millions worldwide who currently suffer from conditions including asthma, cancer, inflammation, and diabetes (8).

Australian biotech companies not only need research partners to grow their capabilities, but also capital investors. Just recently Melbourne-based biotech company Avexa raised US$64 million to fund further trials of its antiviral HIV drug, apricitabine (ATC). This included US institutional investors such as San Francisco–based Passport Capital. Together with the share placement, this will provide the company with the bulk of the funds required to complete phase 3 trials for ATC over the next two and a half years (9).

Australia’s reputation for conducting clinical trials is growing rapidly, with around 700 performed in more than 2,000 sites around the country annually. In an international benchmarking study the Economists Intelligence Unit (www.eiu.com; London, UK) ranked Australia as the best location for conducting pharmaceutical clinical trials. Overall, Australia scored well for average costs of clinical trials, had a relatively large number of recognized trial sites, and completed a high percentage of clinical trials within the allocated time. Released in November 2005, the report compared Australia with six countries: the United States, United Kingdom, Germany, Japan, Singapore, and India (10).


AusBiotech, the Australian biotechnology industry’s premier organization, held its national conference 2007 in Brisbane, Queensland, 21–24 October 2007. The three-day conference attracted many senior pharmaceutical and biotech executives. “There were more than 1,300 delegates and 400 people with the titles MD, VP, CEO, and CFO. In addition there were more than 400 international visitors and 55 international speakers,” said Anna Lavelle, CEO of AusBiotech. “We expect an even greater number of very senior pharma and biotech executives to come to Melbourne for the AusBiotech 2008 meeting.”

Lavelle shared that the conference had attracted delegates from the top 12 pharmaceutical companies along with the top five global biotech companies, because “our biotechs are developing partnerships, forming collaborations, signing licensing agreements — basically moving away from the university/start-up level.” Australia’s private biotechnology companies are producing their own research rather than relying on universities, according to a report released at the conference. The findings indicate a new maturing of the industry.

Compiled by Research Australia, the Beyond Discovery 2007 Report found that 44% of research in Australia comes from private and listed companies compared with 35% from universities, reversing a trend that has previously seen the bulk of research coming from tertiary institutions. In the 2004 report, 21% of research came from private companies and 66% derived from universities. According to the new report, this change may be “associated with the maturing biotechnology sector.” During 2007 the Australian biotechnology sector was extremely robust, with record growth in market capitalization, capital raised, new companies listed, and the number of companies with products close to regulatory approval and on shelves.

Dr. Michael Vitale, from Monash University in Melbourne, a member of the report’s committee, said that the results — following extensive interviews with 68 health-related biotech companies — may also indicate the emergence of second-generation companies, or new companies being spun out of existing ones.

The report also revealed that almost half the companies surveyed (49%) derived incomes from selling products or services and one third (34%) from licensing intellectual property. Currently exporting are 41%, with the other 59% planning to export in the next 12 months.

The report was supported by AusBiotech and the pharmaceuticals body, Medicines Australia. Research Australia is a national alliance of more than 190 member and donor organizations with a common mission to make health and medical research a high national priority

Despite Australia’s perceived geographic distance from many major markets, the seasonal differences between the Northern and Southern Hemispheres give Australia an extra advantage as a site for clinical trials. For instance, US- and European-based companies can use the Australian winter to conduct studies of such ailments as allergic rhinitis or influenza in time to have results available by the onset of the northern hemisphere’s winter.

Clinical trial facilities are located throughout Australia, each facility with its own strengths and specializations. The Institute of Drug Technology Australia Limited is located in Melbourne, and CMAX is located in the Royal Adelaide Hospital. The National Health and Medical Research Council (NHMRC) Clinical Trials Centre (CTC), affiliated with the University of Sydney, conducts and coordinates large multicenter clinical trials. The CTC has a special int
erest in cancer and cardiovascular trials, taking part in trials of national and international collaborative groups and contributing expertise to trials run by others.

Nucleus Network, located in Melbourne, provides a broad range of expertise on clinical research and product development to the global pharmaceutical, biotechnology, and medical device industries. The company is composed of the Centre for Clinical Studies (which provides infrastructure for the conduct of clinical trials, especially early phase trials across a broad range of therapeutic areas), and Clinical Trials Consulting (which provides sponsors with clinical research consulting services, regulatory affairs and education and training services).

Novotech is Australia’s largest independent contract research organization (CRO). Recently, Novotech announced it has attracted the backing of leading regional biotech venture firms BioPacificVentures and Capital Partners for its overseas expansion plans, confirming Australia’s strength as a base for biotechs conducting business in the Asia-Pacific. Novotech is planning further expansion in the United States (based in San Diego and New Jersey) and is also investing US$7 million to set up operations in India by the end of 2007 (11).