Deciding to outsource biopharmaceutical manufacturing is a strategic decision with long-term consequences. Most companies deliberate carefully as they select a contract manufacturing organization (CMO). Because the factors involved in such deliberations vary widely among organizations — and they shift over time — my company has included an analysis of critical outsourcing issues as part of its fifth annual report and survey of biopharmaceutical manufacturing capacity and production (1). In this year’s study of 434 global biomanufacturing facilities, we found the most important issue (as indicated by 43.6% of respondents) to be control of capacity, offering a secure supply of products (Figure 1). Following that were establishing a good working relationship and demonstrating a track record with similar products, as indicated by 41.4%, for each. 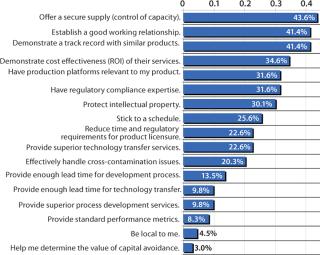 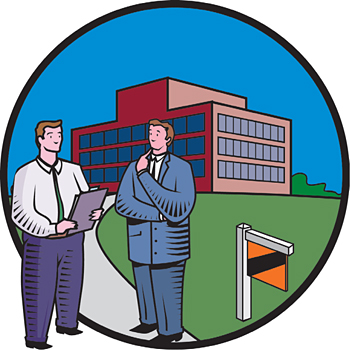 Clearly, control of capacity is an important issue, and it has continued to grow over the past three years from 32% to 44%. The implications are that this industry is maturing in recognition of the risks associated with product lifecycle management. In fact, offering a secure supply is becoming increasingly important as the industry gains manufacturing experience.

According to Tom Ransohoff, vice president and senior consultant at Bioprocess Technology Consultants (Acton, MA), “As the industry matures, companies are looking more closely, not just at getting their products to commercial launch, but at lifecycle and risk management over the life of the product. This requires closely evaluating supply risks.” In addition, manufacturers are increasingly concerned about single-facility production. “People don’t want to have just one facility for a significant-volume product,” said Ransohoff. “This is a basic risk management practice, and many companies are scrutinizing not just their primary source, but are establishing secure secondary sources of supply for their products as well.”

Interestingly, establishment of a good working relationship was the top issue in 2005, with 53% of the industry indicating it as the most critical issue. This suggests that the CMO industry continues to adopt a service-and customer-oriented approach to long-term relationship building with its clients. Back in 2005, frustrations with CMOs were high, represented by the fact that nearly half of respondents (47%) indicated that the most critical issue when selecting a CMO was the company’s ability to stick to a schedule (a factor that peaked in 2006, with 59% of respondents viewing it as a major concern).

Although 41% indicated it as a critical factor, it is likely that demonstrated product expertise and an ability to demonstrate a track record with similar products is the ante just to get in the game. If a CMO does not have clear competence in both process development and production using the relevant expression systems, technologies, and equipment, then it is unlikely to be awarded a contract.

Sticking to a Schedule

Adherence to a schedule is one of the more interesting developments this year because it declined precipitously, dropping over 33 percentage points from 58.7% in 2006 to 25.6%. This shift suggests that industry is maturing both in clients’ expectations and in the CMOs’ ability to establish reasonable deadlines and define time variables involved in the process.

According to Geoff Hodge, vice president of process development at Xcellerex, Inc. (Marlborough, MA), “Both sides appear to be more understanding that there will be delays and tech transfer issues, as well as business issues when outsourcing.” This meeting of expectations can reduce anxieties over missed deadlines — and lessen the frustrations that can result.

Ransohoff noted, “It may be easier today to book slots because capacity this year has been freeing up. This makes it easier to stick to a schedule. Also more long term, CMOs have gained experience and maturity with MAb production, so their ability to keep to timelines is getting better as they tighten their execution and planning expertise.”

Return on investment (ROI, based on a CMO’s ability to demonstrate cost effectiveness of services) was considered important by 34.6% of respondents. Although most CMOs (as with most vendors in general) are not directly asked to provide ROI analysis, many CMO sales people report being asked to compare costs and show how that will translate to direct cost savings over other options, such as bringing a project in-house.

Far down on the list of concerns were companies’ ability to provide sufficient lead times to cover development of processes and technology transfer and to provide “superior process development services.” This indicates overoptimism regarding the speed at which process development can be undertaken. In some cases, CMOs are given the more difficult projects. Yet clients expect development work to proceed rapidly and without problems or delays.

Hodge pointed out, “Clients routinely underestimate the time required for the process development work needed for a successful outsourcing relationship.”

Interestingly, proximity appears at the bottom of the list of priorities. Over the past five years, an increasing number of CMOs are being established globally. From China and India to Malaysia, Singapore, Cuba, and even the Middle East, international CMO relationships are becoming increasingly common. Management issues associated with long-distance intercultural relationships still exist, but experience, niche competence, and technical expertise are opening up opportunities.

Despite that, location may still be a more significant factor than decision-makers may consciously admit. Xcellerex’s Hodge says, “[As a CMO], we have quite a few customers that have stated that proximity is a major advantage. It may be something that is only realized after the fact of awarding the contract, but I do not think that is the case. There may be an unconscious stigma against recognizing the importance of being local since we like to think of ourselves as a global industry with worldwide communications capabilities, but the fact is that contracts go much more smoothly when people can meet and transfer supplies and samples face to face on a regular basis.”

In evaluating how decision-making for outsourcing biopharmaceutical manufacturing has changed over time, my company’s analysis finds that offering “a secure supply (control of capacity)” has increased the most. From 2006 when 35.7% of respondents felt this was a critical issue to 43.6% today, this represents a 7.9 percentage-point increase.

“Being able to stick to a schedule” declined in importance the most over this past year. In 2006 it ranked as the most important factor, with 58.7% of respondents indicating that it was critical. But in 2007, only 25.6% of respondents felt that it was important. Other factors that declined in importance include “effectively handling cross-contamination issues,” which dropped from 30.8% of respondents to 20.3%. “Demonstrating a track record with products similar to mine” also declined from 49.7% to 41.4% (an 8.3 percentage point drop over the year). “Establish a good working relationship” moved from the number four spot last year to the number two place this year.

Focus on the Relationship

The industry appears to be evolving and maturing rapidly in the way vendors and clients establish effective working relationships. Some common issues and problems that were prevalent just five years ago when I began tracking the industry are decreasing in importance as relationship management between outsource clients and vendors becomes more effective and more common.