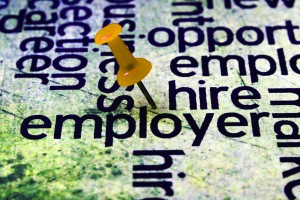 The biopharmaceutical manufacturing industry continues to expand rapidly, with growth in revenue for both suppliers and drug innovators averaging about 15% per year. Understandably, much of the industryās recent focus has been on the pace of technological improvements that have boosted productivity and performance. But another issue is becoming just as critical: The flow of skilled staff able to keep up with the industryās growth isnāt keeping pace. Results from our 2015 annual industry study suggest that the hiring market remains tight, with hiring difficulties increasing in some key areas (1).

Results reflect a trend over the past several years: With more products continually entering commercialization, the growth and importance of commercial product manufacturing means that more process development is being performed than basic research. Yet the skilled employment population made up by the Baby Boomer generation is now on the cusp of retirement. And the number of internal training days is generally not on the rise. As a result, staffing woes will be an increasingly crucial topic in years to come.

AreasĀ Being Staffed
Our analysis indicates that biotherapeutic developers and CMOs have been planning to hire in a number of areas this year. By far the leading area of hiring is production operations, accounting for roughly one-third (34%) of all planned new hires. This year, 18% of new hires will be for process development and R&D (on par with the 18% for basic R&D). Another 14% of new hires will be for regulatory/quality assurance (QA)/quality control (QC) positions. And management positions will occupy slightly fewer than one in 10 (8%) of new hires.

These results are broadly consistent with years past, but for some minor changes. Compared with results from our 2009 survey (the earliest year we measured all those positions), weāve seen a small increase in the share of new hires planned for processĀ development and R&D. Meanwhile, the share of new hires for basic R&D and production operations have largely remained steady.

Likewise, industry projections for 2020 are mostly consistent with this yearās results: Production operations (36%) will account for the bulk of new hires in the future. This tells us that the allocation of new hires within the industry hasnāt changed much in recent years, nor is it expected to in the medium term. However, what it doesnāt tell us is the availability of skilled staff for those areas, and whether supply can match demand.

Difficult to Fill Positions
We asked respondents to identify the positions at their facilities that they are currently finding difficult to fill. As we have seen previously, hiring of process development (PD) professionals continues to be a challenge; both upstream (38.5%) and downstream (37.2%) PD staff topped the list of challenging hires by aĀ considerable degree. That has been a longstanding, unresolved issue. And with no drop-off expected in demand for process development professionals, itās a problem thatās unlikely to be solved any time soon. 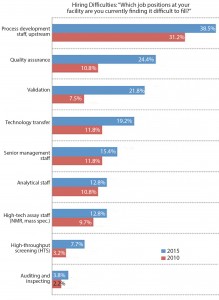 In comparing this yearās results with those of our 2010 study, we find virtually no change in difficulty hiring downstream PD staff. But there has been an increase in the percentage of industry respondents that are finding it challenging to hire upstream PD staff (Figure 1). That the challenges have remained largely steady in the past couple of years does not mean there us no cause for concern. Process development ā both upstream and downstream ā ranks as the leadingĀ service for which the industry wants suppliers to develop new opportunities. That reflects the growing importance of process development and associated demands for greater effectiveness in such a crucial aspect of manufacturing. Itās easy to understand why: Better process development is a leading contributor to improved overall biomanufacturing performance, according to our respondents.

Beyond process development hiring difficulties, we identified several other types of positions that are becoming harder to fill, including

Itās worth taking a closer look at a couple job categories that are quickly becoming more difficult to fill: QA and validation. Our data show that QA hiring is difficult in both the United States and Western Europe but that US companies are having more such problems when it comes to validation.

In the United States and other countries, the growth in field staff within regulatory agencies ā in particular the US Food and Drug Administation ā and the associated expansion of inspections has led to an increased need for both regulatory and QA professionals. As noted above, no drop-off is projected in the share of new hires allocated to QA/QC/regulatory areas, even when measured against new hires planned for production operations and process development.

Such professionals are needed in response to increased facility inspections, which have increased the needs for updating and improving standard operating procedures (SOPs), batch record maintenance, corrective and preventive actions (CAPA) reporting, validation records, and audit responsiveness. Experienced professionals with a successful track record of communicating and interacting with regulatory agencies are in demand. Naturally, this comes with a commensurate upward pressure on compensation packages.

Indeed, as our study demonstrates, QA and validation positions have each become increasingly difficult to fill. Consulting firms have emerged as important outsourcing partners for addressing these critical functions, drawing up much of the available talent. It comes as little surprise, then, that outsourcing of validation services is growing quickly. Faced with shortages of skilled professionals, companies are increasingly outsourcing such activities: almost three-quarters (72.6%) of survey respondents reported outsourcing validation services this year, up from 64.3% in 2010 and representing the fourth-most-outsourced area of activity.

Professionals employed by large biopharmaceutical companies have become project and sourcing managers dealing with multiple suppliers. The number of such positions has grown rapidly as regulatory agencies have become more aggressive auditors and enforcers of regulatory policy in the field. These professionals are heavily recruited by consulting firms that have maintained a significant internal recruiting capability specifically to hire them. In some cases, that recruiting is coming from consulting firmsā own clients as well as regulatory agencies.

Beyond increased regulatory inspections and auditing, the growing demand for skilled QA professionals results from a greater implementation of quality initiatives such as process analytical technology (PAT) and quality by design (QbD) because such strategies require specialized and experienced staff. Expertise required by those initiatives is also growing as QA and validation become more complex and quantitative. We would expect demand for skilled validation staff to grow in part because of the increasing use of single-use systems (including for commercial productĀ manufacture) as well as some unique validation challenges such systems offer.

Itās notable to see that highly specialized positions (e.g., validation, technology transfer, analytical staff, and high-tech assay staff) are more critical to have filled with qualified professionals. Thatās because the industry is clearly worried that hiring problems with scientific and technical staff will cause bottlenecks in their facilities in the years to come. In fact, when we identified 21 factors that could cause production capacity constraints at facilities in the next five years, staffing issues occupied four of the seven most-cited factors.

To put the magnitude of such bottleneck concerns in context, those issues outweigh others including lack of financing, costs associated with downstream purification, and inability to optimize yields using current technologies. 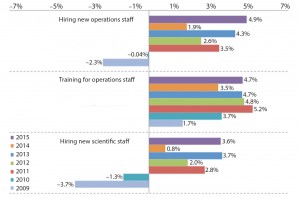 Hiring Budgets
Are growing Faced with potential constraints caused by the inability to hire or retain key staff (as well as competition for those workers from outside companies), biomanufacturers are taking a stance with their wallets. This year, respondents to our study averaged a 4.9% planned increase in budgets for hiring new operations staff (Figure 2). Not only is that the highest planned increase in the past six years, but itās also a sizable jump from the 1.9% budget expansion for operations staff hiring that we saw in last yearās study. Although budget plans for operations staff hiring have gone up and down in recent years, the general trend is for increased spending. Such budget expansions reflect the general demand for production operations staff, which is the largest category for new hires. Those operations staff budgets exceed increases planned for other areas, including new upstream production technologies, outsourcing, and new facility construction.

Budget optimism for new scientific staff isnāt quite as high, but it is still close to peak levels. The industry in 2015 averaged a 3.6% planned increase in spending on hiring new scientificĀ staff. Thatās just below the peak of 3.7% set in 2013, but it otherwise remains well above the spending cuts envisioned during the recession years at the turn of the decade.

TrainingĀ BudgetsĀ Remain Fairly Steady
Unlike hiring budgets, spending on training for operations staff has remained largely consistent over the past five years and is expected to rise by 4.7% this year. The same is generally true for training days, even though some gradual improvements can be made in that area. Upon hiring new operations or manufacturing employees, the largest share of respondents (32.5%) reported providing just 1ā5 days of training, although a similar share (31.3%) stated that are providing over 20 days.

Results showed that 55.1% of respondent organizations provide 10 days or less time training to new operations or manufacturing hires, which is down from 60.9% last year. Another way of looking at it is thatĀ 45.1% provide 11 or more days of training, representing an increase from 39.1% last year. Companies today are more likely to be providing training of between one and 20 days. Training days obviously vary by function, but our data serve as an overall indicator of industry trends. Itās somewhat concerning that we have not witnessed an upward trend in longer-term (20+ days) training over the past few years.

ProblemsĀ Ahead?
Results from our study suggest that the market for experienced biomanufacturing employees remains fairly tight, and our results show no signs of this abating. Most new hires are planned for production operations, with no drop-off forecast for process development hiring. This could cause trouble in the near future, because process development positions remain the most challenging to fill, according to industry respondents. Regulatory positions are also rapidly becoming more difficult to staff. Given increases in regulatory inspections and audits, as well as validation challenges presentedĀ by single-use equipment, those are areas that might also increasingly present problems.

Given the lack of experienced professionals in key positions ā and demographic trends that suggest these shortages will soon escalate ā there is potential for companies to be faced with bottlenecks caused by their inability to retain or adequately train key employees.