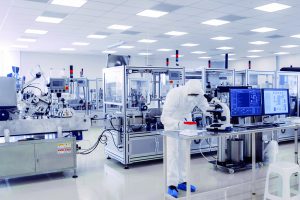 The biopharmaceutical industry continues to grow at a rapid pace. That growth is accelerating even more because of keen investor and research interests in cell and gene therapies. My focus below is on several key growth areas in the field, specifically aspects of development and biomanufacturing. This discussion builds on my 2018 column on top trends in bioprocessing (1). In that article, I identified five key trends that continue to resonate now: 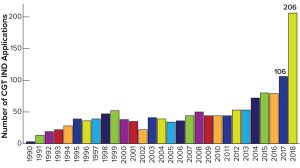 Figure 1:ŌĆéInvestigational new drug (IND) applications in cell and gene therapy (CGT) to the US Food and Drug Administration (FDA) by year, 1990ŌĆō2018; the Center for Biologics Evaluation and Research (CBER) had more than 800 active applications by October 2019.

Cell and Gene Therapy
The relatively new area of so-called ŌĆ£advanced therapiesŌĆØ has become the hottest ticket in biopharma town. Thanks to some impressive successes in both cancer and rare-disease therapies ŌĆö and now with four approved products in the United States ŌĆö companies are scrambling to enter this market. Development and manufacturing facilities for cell and gene therapies are in great demand now, as shown by recent billion-dollar premiums paid by pharmaceutical and contract-services companies to acquire such capabilities. Examples include RocheŌĆÖs acquisition of Spark Therapeutics (US$4.3 billion), CatalentŌĆÖs takeover of Paragon Bioservices ($1.2 billion), Thermo Fisher ScientificŌĆÖs acquisition of Brammer Bio ($1.7 billion), and CelgeneŌĆÖs takeover of Juno Therapeutics ($9 billion). We also have seen a surge in activity at the US Food and Drug Administration (FDA) in this area (Figure 1), with investigational new drug (IND) applications filed with its Center for Biologics Evaluation and Research (CBER) skyrocketing from 106 in 2017 to 206 in 2018 and more than 800 by the autumn of 2019 (2).

Notwithstanding the overall excitement in cell and gene therapy, a general realization throughout the industry is that the field needs to move beyond bench-scale processing toward industrialization. One key challenge, however, comes from the fact that the most significant progress thus far has been in autologous therapies. Based on treatment of an individual patientŌĆÖs own cells, this approach requires scale-out rather than scale-up, with multiple product lots for multiple patients, each lot using its own equipment. That scale-out strategy has been facilitated by the widespread availability of single-use technologies for bioprocessing. Nevertheless, it does involve additional expense and processing compared with scaling up lots that treat multiple patients from one process train, which is the typical arrangement for biopharmaceutical therapies such as monoclonal antibodies (MAbs) and other recombinant proteins (3).

Typically, cell and gene therapy processes require scientific personnel with highly specialized skill sets performing more manual labor than does recombinant protein biomanufacturing. Automation and robotics are being applied to help reduce manual labor, but the demand for scientists with training in cell and gene therapies far exceeds the availability. Universities such as the New Jersey Institute of Technology are partnering with companies in the field to set up relevant training to address that need (4).

Intensified Bioprocessing
The concept of bioprocess intensification broadens an already active trend toward continuous processing to include all steps that accelerate a process and enable more of a given biotherapeutic to be produced in a given period (or in less time) than ever before. This can include using intensified perfusion bioreactors, first pioneered by DSM Biologics and now actively pursued by many biomanufacturers. In perfusion bioprocesses, cells are grown to very high densities through optimized feeding strategies, and recombinant- protein products are harvested continuously through technologies such as the alternating tangential-flow (ATF) filtration originally developed by Refine Technologies and now available from Repligen.

Downstream Processing: Protein purification is improving thanks to several innovations in chromatographic separations. Advances in the capacity of membrane-based separation technologies bring rapid exchange kinetics to allow for accelerated processing (6). Consider those originally developed by Natrix Technologies and now offered by Millipore Sigma, which are said to reduce buffer use by 80% relative to column chromatographic processes (7).

Meanwhile, companies such as GE Healthcare have been developing a new generation of separation modalities based on nanofibers (8). They provide high flow rates and capacities that enable multiple short cycles to be run up to the cycle lifetime of the separation product (typically 150ŌĆō200 cycles). That enables a single-use approach even to expensive affinity chromatography such as that based on protein A for binding antibodies selectively. Essentially, the affinity support becomes a fixed material cost for each run rather than a large, upfront cost that is slowly depreciated as long as a given biopharmaceutical product remains in its manufacturerŌĆÖs portfolio (9). This advancement is exciting because a great deal of money otherwise is spent on protein A resins during clinical development for products that might never be commercialized. Although this technology is still in development for manufacturing scale, it is available currently for bench-scale evaluations (10).

Although chromatographic resin capacities have continued to increase ŌĆö especially for affinity supports such as protein A ŌĆö Purolite recently has applied a new agarose manufacturing technology to produce highly uniform beads. The resulting chromatography medium has high capacity even at fast flow rates (e.g., two minutes residence time) because of the uniform beadsŌĆÖ improved flow properties. Furthermore, those flow properties can facilitate removal of impurities such as host-cell proteins (HCPs) and lessen the amount of washing needed. Both the faster flow rates and facilitated removal of impurities shorten processing times, thereby intensifying an overall downstream process (11).

Another innovation uses standard chromatographic beads with variable load rates on short (e.g., 10 cm) production columns. This concept begins with a maximum flow rate at the start of a process-stream feed, then sequentially tapers that off to slow flow rates as column capacity is approached and reached. The result is higher dynamic binding capacity for a given resin to approach its static capacity more closely than was possible before. Furthermore, the short column lengths curtail each column cycle to allow for multiple cycles to run in the same period or in less time than before. Although column capacities are not quite as high with this technique as with those of multiple-column, simulated moving-bed (SMB) chromatography, it is much simpler and less expensive to implement. Caveats to this strategy remain, however, including the needs to pack short columns carefully to ensure even flow distribution and to measure column-packing efficiencies at both high and low flow rates (12).

Finally, the nonchromatographic purification technology of selective precipitation is receiving new consideration in light of both the advent of continuous processing and the achievement of higher product harvest titers than were possible with older processes. A recent study evaluated in-line precipitation of a monoclonal antibody (MAb) using zinc-chloride and polyethylene-glycol (PEG) solutions (13). That was followed by washing of precipitated antibody using tangential-flow filtration (TFF) and then resolubilization to effect substantial purification (90% removal of HCPs) and high yield (97%) overall. Although performed at bench scale in the published work, this methodology shows promise for further development and scale-up.

Biosimilars
The development and production of biosimilars has been moving steadily forward in recent years, with much greater progress seen outside the United States, particularly in Europe. Techniques for process intensification also are being applied to biosimilar manufacturing, with the first biosimilar produced by continuous processing receiving approval to begin clinical trials in 2019 (14).

Drug developers and biomanufacturers have worked closely with regulatory authorities to produce the ŌĆ£highly similarŌĆØ biologics intended to be marketed as biosimilars. Thus, the principal hurdles to the success of most such products are no longer scientific, technical, or regulatory. In the United States, the main obstacles to market have been political and legal due to ŌĆ£patent wallsŌĆØ and litigation. For example, many biosimilars have received FDA approval over the past two years but have been delayed in marketing by negotiations among the companies who produce the reference/innovator and biosimilar drugs (15).

Innovation for Industrialization
The increased efficiency of bioprocessing has been pushing all biopharmaceutical modalities rapidly toward industrialization. Recombinant proteins have had a substantial head start over new medicines such as cell and gene therapies, but my expectation is for rapid growth and advancement in all segments. Finally, biosimilars have reached a point at which their development and manufacturing are no longer the principal hurdles to market and adoption.

References
1 Ultee ME. Top Trends in Bioprocessing for the Next Five Years. Bioprocess Online 24 Oct 2018; https://www.bioprocessonline.com/doc/the-top-trends-to-watch-in-bioprocessing-0001.

15 Peterson C. Biosimilars in the US: More Approvals But Not Access. ExpressScripts 10 January 2019; https://express-scripts.com/corporate/articles/biosimilars-us-more-approvals-not-more-access.

This article is adapted from the CPhI annual industry report. Find the full report online at https://www.cphi.com/europe/visit/news-and-updates/industry-market-reports.