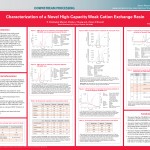 Ion exchange resins with increased selectivity and binding capacity are now in demand and it is imperative for chromatographers to have such resins in their repertoire. The Toyopearl GigaCap® family of resins was created to meet these demands. This poster will focus on Toyopearl GigaCap CM-650M resin as a novel high-capacity weak cation exchange resin for the purification of biomolecules.

A polymethacrylic base bead, Toyopearl HW-65, was chemically modified with carboxymethyl groups in the 1000Ã… pores of the bead which result in greater than 100 mg/mL dynamic binding capacity for IgG-type molecules. The binding capacity for other proteins such as lysozyme and chymotrypsinogen are also significantly increased.

Toyopearl GigaCap CM-650M resin binds mAbs under a variety of conditions. Even at pH 3.6, Toyopearl GigaCap CM-650M resin bound a humanized mAb in a buffer containing greater than 300mmol/L NaCl. Experiments were performed to determine the upper and lower pH boundaries for adsorption, the optimal pH for binding of specific proteins and the maximal conductivity for mAb binding. Resin selectivity is demonstrated by resolving two proteins with pI values less than two units apart. In addition, experiments were performed to determine the impact of increasing protein loads on selectivity.