Downstream problems for biomanufacturers finally appear to be lessening. Over the past six years, demand for better purification has topped the list of biomanufacturing areas in need of improvement. This year, however, it appears that purification woes — though still a hot topic — are cooling off. After seven years of measuring the impact on capacity of specific biomanufacturing operations, preliminary data from BioPlan Associates’ ninth annual survey shows that activities associated with both optimizing internal downstream processes (DSPs) and evaluating external, novel DSP technologies are holding steady or declining (1). This is probably the result of incremental improvements in process design with the ongoing impact of excess industry capacity. Despite incremental improvements, however, downstream processing remains a top area of concern.

“Develop better downstream purification technologies” took the top spot this year, as before, marked by 47.9% of respondents this year and 51.4% in 2011. Each year, our survey reports trends among ∼375 biomanufacturers. On the rise this year is the demand for vendors to “develop more cost-effective disposables,” (46.5% this year, 39.5% last year). Some of that demand for single-use devices is for less-expensive filtration solutions and disposable chromatography columns. Continuing the trend over the past six years, internal focus on improving downstream productivity may be paying off because the “Optimize systems to improve downstream purification performance” factor has once again declined. This year, just 35.2% of respondents expect internal DSP tweaking to reduce their capacity problems, down from nearly 50% of the industry in 2007. 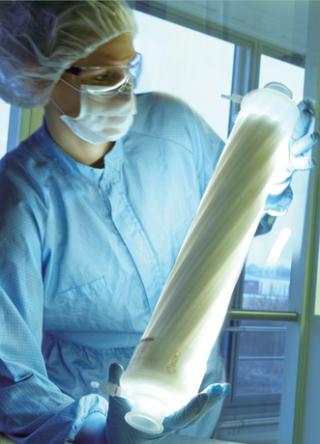 We also compare responses from contract manufacturing organizations (CMOs) and biotherapeutic developers. For the past seven years, downstream issues have been on top of biotherapeutic developers’ minds as needing improvement. Among CMOs, however, the need for better purification technologies is even more acute. Last year, for example, nearly two-thirds of CMOs (62.4%) identified that as a challenge, making it far and away the leading type of upgrade. So it’s not surprising that CMOs are very interested in better, more cost-effective disposable devices. Nearly 50% of those companies are looking for single-use options — and this goes for downstream technologies, as well.

Those data suggest that the impact of DSPs on manufacturing capacity over the past few years is declining. One respondent at Amgen in Longmont, CO, told us, “We have experienced an improvement in our downstream processing as a result of relatively intense focus on individual process steps and incremental improvements in how our existing equipment is being used.”

In our annual study, we sought to identify the magnitude of bottlenecks created by DSP problems and determine whether advances in purification technology were affecting overall capacity. Currently, 68.5% of industry respondents believe that their facility is experiencing at least some degree of capacity bottleneck attributable to downstream processes (2). That represents a marked decrease from 2009, when 74.5% held DSP responsible for bottlenecks. Overall, the impact of downstream bottlenecks is leveling off: In 2011, ∼20% of respondents indicated that they expected no bottlenecks, which was only a slight increase from 2009’s 17%.

Chromatography Problems Remain a Factor: Chromatographic operations take a leading role in downstream processing of therapeutic proteins, especially antibodies. These steps tend to be expensive and challenging to optimize, implement, and operate. But capacity constraints attributable to chromatography columns and related purification steps appear to be improving slightly. This year (2012), just 13.7% of biomanufacturers have reported “significant” or “severe” constraints at their facilities related to column chromatography (down from 14% in 2011 and 20.2% in 2008).

Although chromatography resins have benefited in recent years from improved dynamic binding capacity, advancements in chromatography operations have not kept pace with the dramatic improvements of protein expression levels, especially coming from animal cell culture. Indeed, although our data suggest that the impact of chromatography and other downstream operations pose less of a constraint now than in previous years, relative to other DSP operations, chromatography is still the major hurdle.

Industry Begins Move to Alternatives: With purification issues clearly still affecting capacity, survey respondents appear willing to change the way they approach their production processes. According to Scott Wheelwright (president of Strategic Manufacturing Worldwide), manufacturers are seeking lower-cost operations by “deleting steps, switching to lower-cost resins (such as substituting ion exchange for protein A), and increasing the use of membrane processes” (1). 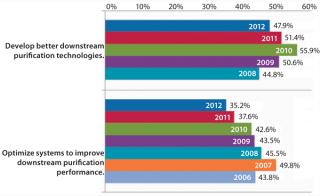 Table 1: Data suggest that the impact on capacity over the past few years is declining

Table 1: Data suggest that the impact on capacity over the past few years is declining ()
Better Technologies on the Way

Numerous new downstream technologies are progressing, and many end-users are actively evaluating their applicability. We see improvements in purification technology that will probably continue to move the industry away from capacity problems: e.g., membrane separation technologies and resins with greater binding capacities.

This year, respondents indicated 21 different technologies under consideration as alternative new DSP solutions. We evaluated the percentage of facilities considering new technologies. Specifically, we asked, “Which new DSP technologies are you actively considering to address capacity bottlenecks?” Most novel downstream processing technologies that were evaluated in 2010 are currently being considered by even more companies. 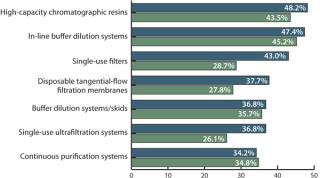 US and Western European Biomanufacturers: In almost every new downstream technology area, a larger proportion of US respondents than Europeans have reported looking at new technologies. For example, more US respondents (50.7%) are evaluating high-capacity resins (42.4% in western Europe), single-use filters (US 47.8%, Europe 39.3%), single-use TFF membranes (US 46.4%, Europe 30.3%), and centrifugation (US 33.3%, Europe 18.2%). The only areas in which western Europeans display a clear preference are continuous purification systems (Europe 48.5%, US 29%) and simulated moving beds (Europe 18.2%, US 11.6%). This is not unexpected. US respondents’ greater propensity for examining new technologies mirrors the increased impact they are feeling from downstream processing. This year, 78.6% of US respondents said they were already experiencing at least minor downstream bottleneck problems, whereas just 54% of western European respondents said the same. And western Europeans were almost twice as likely as their US counterparts to report no bottlenecks at all (27% compared with 14.7%).

The 2011 annual report and survey of biopharmaceutical manufacturing capacity and production is eighth in a series of annual evaluations by BioPlan Associates, Inc. (1). It provides a composite view and trend analysis from 352 responsible individuals at biopharmaceutical manufacturers and contract manufacturing organizations (CMOs) in 31 countries. The methodology also encompassed an additional 186 direct suppliers of materials, services, and equipment to this industry. This survey covers such issues as new product needs, facility budget changes, current capacity, future capacity constraints, expansions, use of disposables, trends and budgets in disposables, trends in downstream purification, quality management and control, hiring issues, and employment. The quantitative trend analysis provides details and comparisons of production by biotherapeutic developers and CMOs. It also evaluates trends over time and assesses differences in the major markets of Europe and the United States.

Novel downstream technologies are emerging, and many people in the biopharmaceutical industry are assessing potential opportunities for more efficient manufacturing. As new technologies make it into clinical and ultimately commercial-scale manufacturing, we expect to see more rapid adoption rates — especially as the new downstream technologies using novel materials, find greater regulatory acceptance. In previous studies, we attempted to evaluate respondents’ awareness of alternative novel DSP technologies, and we found relatively few people with knowledge of options beyond membrane technologies. Further, relatively few biomanufacturers had opinions about which technologies were most likely to yield major improvements.

Our recent data suggest that the situation is changing relatively quickly, especially in areas where capacity constraints are affecting costs and productivity. Single-use devices such as disposable columns and media are just one type of improvement. Stefan Schmidt (ERA Biotech’s chief scientific officer) told us that “single-use and disposable chromatography units will be the most important trend in the next five years. In that timeframe, these will be adopted by the majority of manufacturers, thus impacting price and efficiency.”

Bioprocessing is a highly regulated industry in which many biomanufacturers approach new technologies slowly and cautiously. The learning curve may be somewhat long as the industry discovers, evaluates, and adopts new, alternative technologies. Even so, our data indicate that conditions are ripe for advancement, and the industry is actively dealing with DSP problems through increment improvements and evaluation of novel alternatives to current downstream technologies.