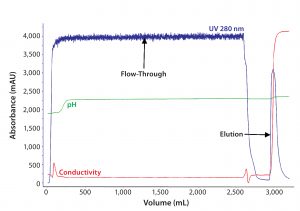 Figure 1: In the first chromatographic step of purification of F-IX from human plasma by anionexchange (AEX) chromatography, human plasma after cryoprecipitation was loaded onto an AEX resin, and F-IX was eluted with a 0.3M NaCl-step gradient.

Human clotting factor-IX (F-IX) is a glycoprotein that is essential for normal hemostasis (1). A deficiency of F-IX in human plasma is caused by an absence or functional mutation of the F-IX gene that expresses inactive F-IX in plasma. That leads to hemophilia B (â€śChristmas disease,â€ť named after its first identified patient), a genetic disorder in which the blood-clotting cascade is disturbed (2, 3).

The structure and amino-acid sequence of F-IX are similar to those found in other vitamin-Kâ€“dependent glycoproteins. Apart from F-IX, these clotting factors include factor II (F-II), factor VII (F-VII), factor-X (F-X), and protein C. F-IX has an apparent molecular mass of 55,000â€“65,000 Da (4â€“8). Calculated from the amino acid sequence alone, its predicted molecular mass is 47,054Â Da, with added carbohydrate content of about 17%. Because of acidic oligosaccharides (10 sialic acid residues per molecule), human F-IX has a low isoelectric point of 4.0â€“4.6.

Also known as â€śChristmas factor,â€ť F-IX is a serine protease of the coagulation system (9). It belongs to the S1 peptidase family (10) and is produced as an inactive precursor (zymogen) (11). F-IX is processed to remove its signal peptide, then glycosylated and cleaved by factor XIa (intrinsic pathway) or factor VIIa (extrinsic pathway) to produce a two-chain form with chains linked by a disulfide bridge (1, 12, 13). When activated into factor IXa in the presence of Ca2+, membrane phospholipids, and a factor VIII cofactor, F-IX hydrolyses one arginine-isoleucine bond in factor X to form factor-Xa. The molecular action is inhibited by antithrombin (14).

The concentration of F-IX in human plasma is very low, amounting to 10 Âµg/mL in healthy adults (3). Administering whole blood or human plasma to correct F-IX deficiency leads to volume overloading and an overdose of other proteins. That creates a need to process plasma through methods such as chromatography to yield highly pure F-IX.

To correct this coagulation factor deficiency and prevent bleeding, replacement therapy with intravenously delivered, plasma-derived or recombinant F-IX concentrates is the cornerstone of managing patients with hemophilia B (12). Specific and viral-inactivated products are the sources of choice for these missing proteins, preferred over fresh-frozen plasma and prothrombin complex concentrates.

Various reports describe the purification of factor IX through use of the following affinity ligands:Â heparin, murine antihuman F-IX antibodies, metal chelate, or sulfated dextran (15â€“18). Such processes usually involve capture of the F-IX complex (containing factors II, VII, X, IX, protein C, proteins S, and other proteins from cryopoor plasma) on DEAE-Sephadex A-50 or DEAE-cellulose media (19). The DEAE eluate is purified further on an immobilized-heparin column (20, 21). Most of these methods yield low recovery of factor IX, however, with low specific activity.

We studied two affinity chromatography resins with high potential for selecting out F-IX fromÂ other plasma proteins. The base matrix of affinity chromatography resin A (GE Healthcareâ€™s Heparin Sepharose 6 Fast Flow affinity resin) consists of highly crosslinked 6% agarose beads. Heparin is linked to the Sepharose matrix by reductive amination, which provides for very stable binding. Affinity resin B (IX Select resin) also has a base matrix of rigid agarose that works at high flow rates and with low back pressures, but a single-chain antibody fragment directed against F-IX is used as an affinity ligand (also from GE Healthcare). Affinity resin B enables efficient capture and intermediateÂ purification of F-IX with high purity and yield.

Here we describe our use of anion-exchange (AEX) chromatography for capture of F-IX from plasma and subsequent purification using two different affinity chromatography resins. Use of affinity followed by hydrophobic-interaction chromatography (HIC) yields highly purified F-IX concentrate. The AEX resin separates F-IX along with other clotting factors that are eluted with higher ionic strengths (21). The process is designed such that viruses are inactivated by solventâ€“detergent (Sâ€“D) treatment in the initial steps before affinity chromatography. Tri-N-butylphosphate (TnBP) solvent and Tween-80 detergent are removed in the affinity chromatography step (21). Virus-retentive filtration is an additional method for removing small, nonenveloped adventitious viruses (20, 22â€“24).

In 2016, Pilli et al reported using these same affinity resins to purify murine F-IX (25). But we are the first to use it for purifying F-IX at large scale from human plasma. We compare the two affinity chromatography resins for selective purification of F-IX herein, having produced highly pure (96%) F-IX drug substance from human plasma with a specific activity of 250 Â± 30 IU/mg for patients with hemophilia B.

Materials and Methods
We obtained fresh-frozen plasma in polyvinyl bags from blood banks approved by the US Food and Drug Administration (FDA) and registered with the National AIDS Control Organization under the government of India. We used standard FDA-approved kits from Abbott Molecular to perform nucleic acid testing for hepatitis-B virus (HBV), hepatitis-C virus (HCV), and human immunodeficiency virus-I (HIV-I). Antibody testing kits for HIV-I, HIV-II, and HCV came from Bio-Rad Laboratories, and an HBV kit came from Diagnostic Bioprobes. AEX, affinity, and HIC resins for F-IX purification came from GE Healthcare, as did the columns we used.

Plasma Testing: Every unit of plasma we used was nucleic-acid tested for HBV, HIV-I, and HCV. All units that tested negative were pooled and used for the purification study. Plasma also was tested for the presence of antibodies against HIV-I, HIV-II, HBV, and HCV. Again, only those testing negative were used.

Electrophoretic Methods: We used nonreducing conditions for SDSâ€“PAGE. Electrophoretic separations were carried out on 10% separating gel (1.5Â M Tris-Cl, pH 8.8) and 4% stacking gel (0.5 M Tris-Cl, pH 6.8). The running buffer was Trisâ€“glycineâ€“SDS buffer (pH 8.3). We ran the gel under a constant 200 volts for 45Â minutes in a Bio-Rad Laboratories Miniprotean Tetra cell assembly. Silver staining was based on manufacturerâ€™s recommendations.

Protein Purity (Analysis By Size-Exclusion High-Performance Liquid Chromatography, SE-HPLC): For analytical SE-HPLC, we separated samples with 5-Âµm G3000SWXL TSK gel, 30 cm Ă— 7.8Â mm i.d., from Tosoh Biosciences. The column was connected to an Agilent Technologies 1260 Infinity system in quaternary gradient mode. We used phosphate buffer with saline at pH 7.0 as the mobile phase. Samples were normalized to 0.1 mg/mL in the mobile phase before injecting 100 ÂµL into the instrument set for a flow rate of 0.5 mL/min and absorbance at 280Â nm. 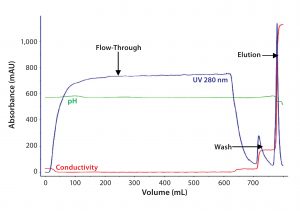 Figure 2A: For the second step in Experiment One, eluate from AEX chromatography after Sâ€“D treatment was loaded on an affinity resin A column. F-IX was eluted with a 0.5M NaClâ€“ step gradient.

Factor-IX Potency Analysis: We tested the potency of our purified F-IX using an ACL Elite Pro automatic coagulometer from Instrumentation laboratories for a single-stage coagulation assay.

Experimental Procedure: Factor IX was purified from fresh-frozen human plasma that tested negative for HBV, HIV, and HCV. We manually cut 200Â L of plasma frozen at â€“40 Â°C into 250-L polyvinyl bags, then pooled, thawed, and centrifuged the plasma (using a Westfalia Separator system) to prepare cryopoor plasma according to Brummelhuisâ€™ method (12) with modifications that have been described elsewhere (10). 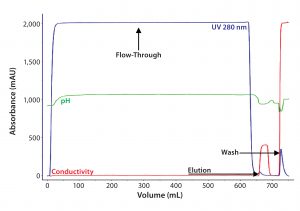 Figure 2B: For the second step in Experiment Two, eluate from AEX chromatography after Sâ€“D treatment was loaded on an affinity resin B column. F-IX was eluted with 2M MgCl2.

Briefly, the initial step is a solid-phase extraction of the cryopoor plasma with an AEX chromatographic resin (DEAE Sepharose Fast Flow resin from GE Healthcare). That followed clarification of the cryopoor plasma. Then the elution was subjected to Sâ€“D treatment with 1% (w/v) TweenÂ 80 and 0.3% (w/v) TnBP for six hours at 27 Â°C. Selective F-IX separation was based on affinity chromatography resins A (Heparin Sepharose 6 Fast Flow) and B (IXSelect), both also from GE Healthcare. In one experiment, we collected the eluate from affinity resin A and analyzed it for purity, activity, and protein content using SDS-PAGE, potency, and total-protein assays. 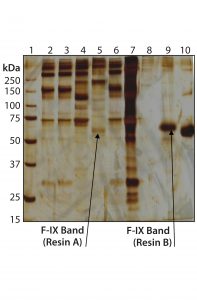 In the second experiment, we loaded treated eluate onto affinity resin B and analyzed the eluted protein of interest for purity, activity, and protein content using SDS-PAGE, potency, and total-protein assays. For the final step in chromatographic purification (polishing) we used a HIC resin (Phenyl Sepharose 6 Fast Flow from GE Healthcare) and virus filtered the eluate with an Asahi-Kasei Planava 20N filter followed by a 0.2-Âµm sterile filter (MilliporeSigma). Thus purified, F-IX was collected and analyzed with SDS-PAGE, SE-HPLC, potency, and total-protein assays.

Results and Discussion
The first step in F-IX purification influences the subsequent processes. The capture step includes an AEXÂ resin that effectively binds clotting factors that depend on vitamin K (FIX, FII, FVII, and FX), because of their similar binding properties, as well as other highâ€“ and lowâ€“molecular-weight proteins. With increased conductivity in the elution buffer, bound proteins desorb from the column (Figure 1). Specific activity of F-IX in the AEX eluate was 1.2 Â± 0.3Â IU/mg of protein.

For intermediate purification, we compared affinity ligands in affinity chromatography resins A and B by loading eluate from the AEX resin onto them simultaneously. Figures 2A and 2B show comparative chromatographic purification profiles for these affinity resins. From those profiles, we observed that the B ligand is more specific for F-IX and therefore binds much less total protein. 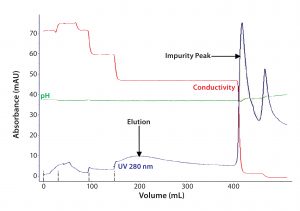 Figure 4A: For the third step in Experiment One, eluate from affinity chromatography resin A was loaded onto a HIC column. F-IX was eluted with 0.4M salt concentration (step gradient). 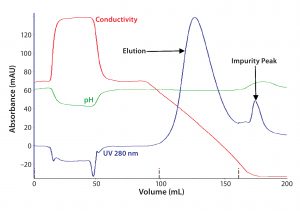 Figure 4B: For the third step in Experiment Two, elute from affinity chromatography resin B was loaded onto a HIC column. F-IX was eluted with a linear gradient of 0.6-0M salt concentration.

For removing trace impurities and/or leachables that could have come from the affinity resins, we introduced a final polishing step using HIC. Figures 4A and 4B show elution profiles for the affinity resin eluates loaded onto HIC. 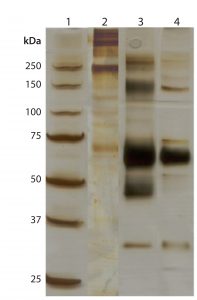 Using SE-HPLC, we studied highâ€“ and lowâ€“molecular-weight impurities in eluate from the final step of HIC chromatography after both affinity resin A and B as an intermediate chromatography step. Our results indicated highly purified (96%) F-IX product from the resin B process compared with 84% purity from the resin A process. Based on these above findings and comparative analysis, we chose affinity resin B for our F-IX purification process.

Selection Success
Affinity chromatography provides a rapid and effective tool for selective purification of the molecule of interest from a crude mixture of proteins. After comparative evaluation of two affinity resins for human F-IX, we observed that resin B showed a 10â€“15Ă— higher dynamic binding capacity (DBC), better purity by SE-HPLC, and higher selectivity than resin A. Higher productivity was achieved using resin B in our F-IX purification process than from resin A in the same process design. Thus we have successfully demonstrated the use of a specific single-chain antibody fragment directed against F-IX for large-scale purification of highly concentrated F-IX from a heterogeneous mixture of proteins in a plasma pool. 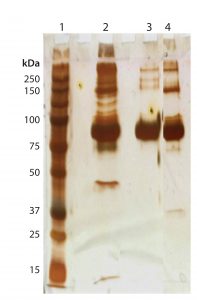 Acknowledgments
We acknowledge the support and cooperation of GE Healthcare India for this project and would like to thank the management of Intas Pharmaceuticals for providing us with the resources necessary to execute this work.