Downstream processing is a sequence of unit process operations that purify biopharmaceuticals and prepare them primarily for bulk formulation (Figure 1). Typically, a large volume (hundreds to thousands of liters containing kilograms of therapeutic protein) is delivered from an upstream fermentation or cell culture process — and this ends up as a small volume (a few liters) of purified concentrate product after processing. 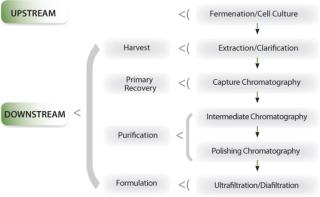 For many years, biopharmaceutical manufacturers have been working to increase capacity, address upstream production issues, and improve yields. Notable successes have been achieved recently in upstream technology, significantly increasing expression rates and therefore upstream production capacities. Successes in generating higher titers combined with increasingly stringent quality and regulatory requirements creates a number of challenges in aligning the efficiency of downstream process with those upstream titers. 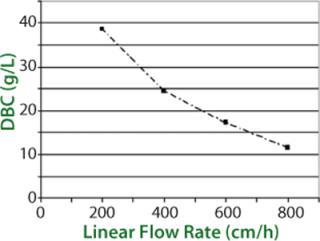 Methods of filtering and purifying product streams have thus become the focus of attention for many manufacturers and suppliers. Downstream improvements in product recovery and purification are now urgently needed. However, such changes may not be as fast moving or revolutionary as the industry would like them to be. To date, there have been few significant advances. Companies still rely heavily on chromatography, but there have been few capacity increases in chromatography media over the past few years. 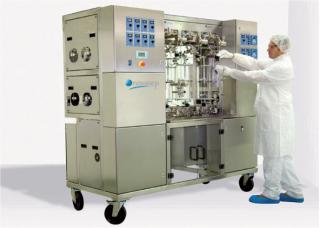 Among the stages of a purification process, chromatography still remains the “work horse,” with at least two orthogonal chromatographic steps in most processes. The purpose of these steps is to separate a target protein from product-and process-related impurities and ultimately to purify it to very high levels (often above 99%). This is achieved by selectively adsorbing and desorbing target proteins and contaminants using time and different elution conditions. Such conditions are based on the physicochemical properties of target products and their related impurities to ensure effective separations.

In capture steps, it is well known that batch column processes are limited, and rarely if ever do they use the full capacity of a stationary phase during loading. The higher the loading flow rate, the lower the dynamic capacity. Dynamic binding capacity (DBC) is a common term that defines the available capacity of a stationary phase as a function of loading flow velocity (Figure 2). So increasing flow velocity has a double effect: Both cycle time and available binding capacity decrease.

The Answer Lies in the Process

The use of multiple columns in one separation step allows breakthrough of the product stream to a secondary column, so identical simultaneous separations can be run (thus, faster), and the productivity of the resin is improved while maintaining very high yields. This strategy has already been successfully applied to other types of separations, as in the separation of chiral molecules using Groupe Novasep’s Varicol technology and in amino-acid purification by multicolumn systems.

In 2007, a fully automated and optimized approach to multicolumn chromatography was introduced by Groupe Novasep. Sequential multicolumn chromatography (SMCC) uses full automation and flexible, asynchronous scheduling of multiple columns (up to six) in enabling processes to run at linear flow rates over 1,000 cm/h and effectively make use of almost 100% of resin capacity. The end result of approaching the maximum loading capacity while increasing process flow rates is 1.5-to 4.0-fold improvement in productivity (expressed as grams of protein per liter of stationary phase each day) as well as 2.0 to 4.0-fold reduction in wash, elution, and regeneration buffers used, with much faster process rates. Because of the increased productivity (g/L), the quantity of stationary phase material can be reduced proportionally up to a factor of four. Thus, the use of several columns (typically three or four) in the SMCC process significantly reduces the footprint of chromatographic columns (e.g., from one 1.7-m column for a batch process to four 0.6-m columns with SMCC).

Furthermore, several chromatographic and tangential-flow filtration (TFF) steps can be integrated to make continuous downstream processing possible. In such a scenario, efficiency is gained from each process, ultimately leading to significant savings and/or capacity increases. SMCC technology offers significant efficiency to both single and multiple-unit chromatography steps in existing processes based on resin volume, manpower, and buffer savings alone. In new facility designs running downstream processing semicontinuously, SMCC technology studies (Table 1) have shown that based on footprint, utility requirements, and capital expenditure, ∼25–40% savings can be expected, and COGs for downstream processing could be reduced ≤70%.

Table 1: Economic comparison of batch and SMCC processes for a MAb capture step

Table 1: Economic comparison of batch and SMCC processes for a MAb capture step ()
Principles of SMCC

SMCC uses the same type of stationary phase and the same separation techniques as are used in any given batch chromatography process. Figure 3 contrasts a single batch-column process with a four-column SMCC process. The flow diagram shows that with SMCC, a single-batch column is divided into four smaller columns. Three of those four columns are available for loading in linear sequence while the fourth column is eluted, regenerated, and equilibrated. This happens out of sequence with continual loading until each column is ready to return to the linear sequence in rotation. 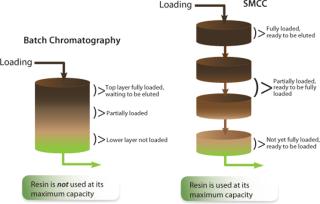 In a classic batch process, a column is loaded before the breakthrough threshold is reached at its outlet. At constant bed height, as the loading flow rate increases, the amount of loaded product decreases while mass-transfer phenomena prevent fast capture of a target product. Consider the state of this column before product leakage is attained, when the preceding layers of stationary phase are more loaded than those close to the column outlet. In the most inefficient processes, loading must be stopped even if a significant portion of the column is poorly loaded. The more completely loaded layers, perhaps approaching the maximum capacity of the stationary phase, are ready to be washed and eluted. Unfortunately, all process steps must be applied to the whole column; thus, the poorly loaded layers are washed, eluted, and regenerated in spite of their low contribution to the capture task.

Figure 4 compares that with an SMCC process, with which highly loaded layers are contained in the first column (1), thus isolated from the process, and later chromatography steps are applied independently. A washing step of appropriate volume for that first column pushes unbound target product contained in its liquid phase to the second (2) column, thus preventing product loss and minimizing buffer use. The first column is then eluted while loading restarts in linear sequence through the partially loaded columns (3). The second column reaches a highly loaded state as does the first column (6), and this process repeats for each column to complete a full SMCC cycle. By the end of one cycle, each column has been exposed to the same quantity of product and buffers. 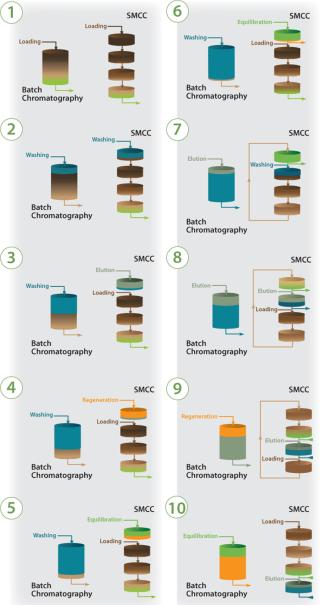 Once the first column has completed all steps and is fully equilibrated, it is ready for reintroduction into the loading sequence as the washing step starts for the second column (7).

When that second column is washed, the loading line is transferred to column three, making it the lead column (8). The first column will be progressively loaded when the fourth column is the lead column (9). Once the fourth column is fully loaded and washed, it goes through elution and regeneration. At this point, the loading line is transferred back to the first column (10), and the SMCC cycle starts again.

In SMCC processes, elution column ratios remain the same as in a batch process (Table 2). As a result, the columns are smaller, so more protein is bound by each liter of resin. The overall buffer volumes are minimized in each phase of this chromatography process, thus reducing the overall consumption of buffer for each gram produced of purified target product.

More than product yield and process efficiency, product quality, and patient safety are the primary concerns of therapeutics manufacturers. Novasep’s BioSC system complies with all regulatory and quality requirements including those for in-line buffer dilution and on-line monitoring and control functions in support of process analytical technology (PAT) manufacturing initiatives. The SMCC process has been shown to cut downstream processing costs by ≤69% while increasing productivity and quality through more efficient use of expensive stationary phase, reductions in CIP and buffer use, downsizing of downstream processing systems and utilities, and reduced capital expenditures. Reduced labor costs come from highly automated process control and analytical analysis.

Process Transfer: SMCC parameters such as the number and height of columns, timing of feed switching, and flow rates for each step are determined from routine batch data such as breakthrough curves at different flow rates (Figure 5) and total capacity of a stationary phase. In silico simulation is then used as a tool to select the most advantageous process parameters. Over the years, simulation tools have been improved through development of continuous or sequential purification processes for different types of molecules on both laboratory and multi-ton scales. Once an optimal SMCC process has been determined, it is confirmed on an automated laboratory-scale set-up, and the selected parameters are verified experimentally. Accuracy and predictability of these simulations have proven to be well within 10%. 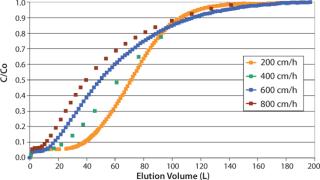 Such generic assessments based on real production data have been confirmed during process simulation using Novasep’s Chromsoft software. Table 2 shows an example of one such simulation.

In this scenario, the batch process is shown in Table 2A. Table 2B–Table 2D represent simulation cases with different manageable variables, loading linear flow rates, numbers of multiple chromatography columns, and bed height. In this semioptimized case, it is clear that more chromatography columns and a smaller bed height are most advantageous. The data in Table 2D show that at a loading linear flow rate of 950 cm/h with a four-column system and a 14-cm bed height per column improves protein A capture MAb productivity 2.5-fold, from 386 g/L/day in batch mode to 969 g/L/day in SMCC mode. At the same time, buffer consumption decreased from 1,500 mL/g to 630 mL/g, a 2.4-fold reduction. 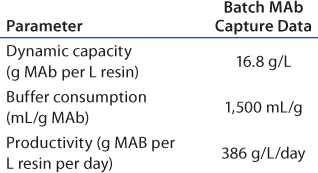 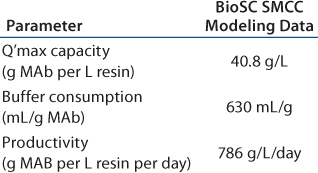 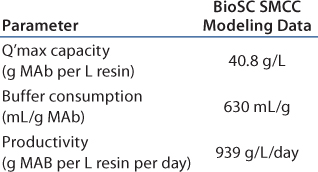 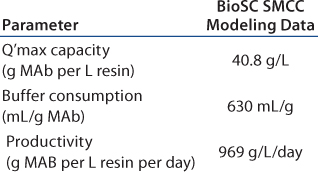 Design and Validation Considerations: A fully automated BioSC system is designed and built to be fully integrated, complete with all necessary pumps, valves, pipework, and instrumentation. Thus no “novel” valving systems had to be developed. Past experience has proven multicolumn systems successful from a chromatography standpoint, although significant challenges remained for technical realization. Typically, the large number of columns, inappropriate valves, and fluctuating flow control all lead to real technical challenges (cleaning system and flow control) and often render large-scale applications impossible. The BioSC system was designed around well-established components commonly used in most batch chromatography systems. This is important because the industry is familiar with both their reliability and maintenance and may well have established spare-parts practices. Finally, the system was designed according to ISPE GAMP-4 guidelines and meets ASME/BPE engineering standards. Furthermore, the control platform and user interface are 21 CFR Part 11 compliant.

Columns and Column Packing: The BioSC system is designed to flexibly fit any process and is built to accommodate up to six columns. It can accommodate almost any type of column, including prepacked single-use or radial columns. In multiproduct or developmental use, the system can be programmed for a different number of columns, and the columns themselves can be easily swapped out. They can also be automatically packed and tested while on the system.

Sequential multicolumn chromatography has demonstrated a clear ability to increase the productivity and drive down the costs of downstream processing. The nature of individual purification steps does not change; the resins and buffers are the same product-contact materials used in current processes. This fully automated approach to chromatography process steps has been shown to reduce the amount of expensive stationary phase materials required by a factor of two. Buffer volumes can be reduced by a factor of ≤4.0 while process linear flow rates are increased by a factor ≥3.0. The SMCC process will also facilitate opportunities to develop fully integrated continuous downstream processes and drastically shrink the size of DSP facilities.