For many years, biopharmaceutical manufacturers have worked to increase capacity, address upstream production issues, and improve product yields. Notable successes recently achieved in upstream technology have significantly increased expression rates and therefore, upstream production capacities. Successes in generating higher titers combined with increasingly stringent quality and regulatory requirements have led to a number of challenges in aligning the efficiency of downstream processing with upstream titers. It is generally recognized that downstream processing costs account for about 70% of the total biomanufacturing cost (1). As a result, improvements in product recovery and purification are urgently needed. In trying to overcome this challenge, companies analyze where the best solutions lie: in streamlining operations, exploring emerging technologies, and/or using disposables.

Biomanufacturers are showing increasing interest and seeing strong development in single-use technologies and devices both for upstream processing (e.g., single-use bioreactors) and in downstream processing (e.g., storage bags, connectors, and filter capsules). Single-use systems are used in essentially all aspects of biopharmaceutical manufacturing: production, storage, transfer, filtration, purification, and separation of biotherapeutics (2). The biotechnology industry immediately recognized the benefits of single-use products that provide significant savings in time, labor, and capital. The flexibility provided by disposable devices increases production while eliminating the need for steam-in-place (SIP) or clean-in-place (CIP) cleaning and associated product validation. Because sanitization steps are not required, the use of caustic chemicals and purified water is minimized or eliminated, and the risk of cross contamination is reduced.

For years, the concept of disposability was introduced only for normal-flow filtration steps (e.g., virus filtration and sterile filtration). Disposable devices have proven their efficiency in such operations. However, a typical downstream purification process often includes several tangential-flow filtration (TFF) unit operations (Figure 1). Until recently, TFF was operated only with reusable devices. Under general circumstances, however, a significant amount of time and resources can be conserved by implementing a single-use TFF process strategy. Disposable, designed-for-purpose, and presanitized single-use TFF cassettes are now available. Here, we present a recently developed economic model comparing reusable and single-use cassettes for TFF processing. Performance is compared as well for preconcentration TFF steps. 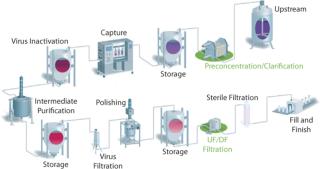 A Few Words About TFF

In downstream processing, membrane-based TFF unit operations are used for clarifying, concentrating, and purifying proteins. In TFF, a solution is pumped tangentially along the surface of a membrane filter (3). When pressure is applied, a portion of the fluid is forced through that membrane to its filtrate side. Particulates and macromolecules that are too large to pass through the membrane pores are retained on its upstream side and swept along by the tangential flow. This makes TFF ideal for fine sized-based separations.

Downstream processing of monoclonal antibodies (MAbs) usually involves one or more ultrafiltration/diafiltration (UF/DF) steps, one of the most widely used applications of TFF. This is useful in separating proteins from buffer components for buffer exchange, concentration, or formulation before final product fill and finish. The objective of a UF/DF step is primarily to reduce batch volumes and exchange buffers before final formulation.

TFF systems exhibit highly predictable performance characteristics, scalability, ease-of-use, speed, and reliability â€” all of which have contributed to establishing this method as the preferred separation solution for many biopharmaceutical applications. TFF systems are frequently used for applications in which proteins of different molecular weights in solution need to be fractionated. A reliable, scalable process must also be implemented to ensure high product quality, activity, and robustness for a large product yield and controlled endotoxin levels.

Downstream purification processing of biopharmaceuticals often contains several TFF steps (Figure 1). Under general circumstances, a significant amount of time and resources can be conserved by implementing a single-use TFF process. To highlight this benefit, an economic study was conducted (4).

Parts of a typical TFF process using traditional reusable equipment include preprocess activities, sample processing, and postprocess activities. Figure 2 shows the components of each and assigns percentages proportional to the time required to perform each activity. Typically only 50% of the total period is devoted to actually processing a product stream. The remaining half is spent in preparation and cleaning of the TFF system (5). 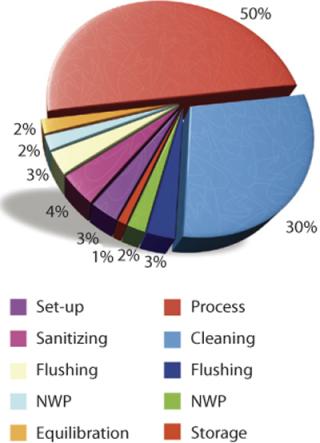 A single-use TFF process can be broken down similarly. Figure 3 shows the components of each activity, assigning each a percentage that is proportional to the time required to perform it. Here, 80% of the total period is devoted to processing the product stream, which increases process efficiency and saves a significant portion of the overall process time. 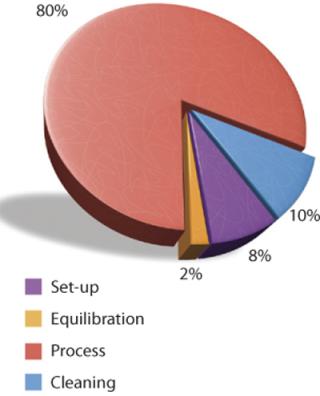 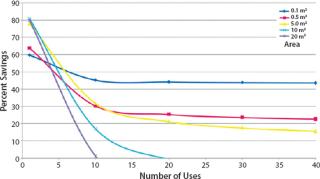 Our case study is a comparison of standard, reusable, regenerated-cellulose cassettes and presanitized, purpose-built, single-use TFF cassettes for preconcentration of a MAb platform process. This preconcentration step was developed for MAb purification in a phase 2 clinical manufacturing campaign. The customer needed about 1 kg of MAb for the clinical study.

General Process Description: A quantity of MAbs was produced in a 1,000-L bioreactor using Chinese hamster ovary (CHO) cells. The MAbs were expressed as extracellular products and secreted in the cell culture medium. A depth filter with 0.2-Âµm pore size was used to remove the cell mass and collect MAbs in its filtrate. After concentration and buffer exchange, the feed sample was then loaded onto a capture chromatography column.

Requirements for TFF Step: After clarification, MAb concentration in the filtrate was ~0.2 mg/mL (200 g/run). Ten runs were required to generate enough MAb for clinical testing. In line with the conclusions of our economic comparison (4), the customer decided to use disposable processing to minimize the equipment needed in generating clinical material. The company will also save money, time, and resources on reduced cleaning validations.

A single-use strategy was implemented, and we compared two commercially available alternatives for the initial MAb concentration and diafiltration before capture chromatography: Novasep’s presanitized, disposable Sius cassette with a HyStream 30-kD high-hydrophilic polyether sulfone (PES) membrane; and a traditional ultrafiltration cassette with a 30-kD regenerated-cellulose membrane. Both were used as disposable cassettes for a single run. The UF system used for initial concentration and diafiltration had a disposable flow path made of silicon tubing, bags, and disposable instrumentation. Thus, no cleaning of the system or UF membranes was necessary.

Theoretically, a 1,000-L bioreactor was to be used for generating clinical supplies. A scale-down experiment was performed using a laboratory-scale Sius-LS HyStream 30K cassette with a 0.02-m2 membrane surface area (Novasep part number XP030LP2L). The starting feed volume for this experiment was 2 L, and the ratio of starting feed material to membrane surface area was 100 L/m2. The required membrane surface area for scale-up to a 1,000-L batch was 10.0 m2. Buffer consumption was 1,200 mL (60 L/m2) dedicated to the equilibration stage only (no need for CIP, flush, and equilibration because disposable Sius cassettes are presanitized and come ready to be equilibrated).

A similar experiment was performed using a traditional UF cassette with a 30-kD regenerated-cellulose membrane having a surface area of 0.0088 m2 (2). However, the starting feed sample was 1.46 L, which gave a ratio of starting feed material to membrane surface area of 166 L/m2. The required membrane surface area for scale-up to a 1,000 L batch was 6.0 m2, and buffer consumption was 1,232 mL (140 L/m2). The process in this case added 80 L/m2 for initial CIP and flush (in addition to a buffer consumption of 60 L/m2 for equilibration), giving a total of 140 L/m2.

After a fivefold concentration, the sample volume was reduced from 1,460 mL (starting volume) to 292 mL (end volume after concentration). The diafiltration volume was 1,168 mL, which corresponds to 4 DV. Total process time was eight hours, and the average flux was ~44 L/m2/h.

Each of these experiments was repeated twice, and Table 1 summarizes their results. Clearly, time and buffer consumption are minimized with single-use systems, for which all the time is devoted to processing. 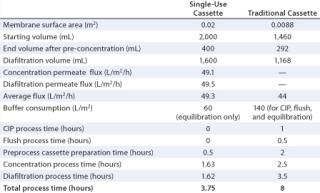 The process was performed 10 times to produce the required amount of MAbs. Table 2 compares and summarizes the results and cost savings.

Table 2: Savings based on processing using single-use cassettes for a total process requirement of 10 runs 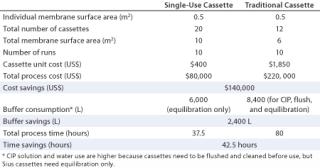 Table 2: Savings based on processing using single-use cassettes for a total process requirement of 10 runs ()

For the TFF step, an economic model compared processing with reusable and disposable cassettes. Disposable TFF provides measurable benefits in many circumstances, particularly for production of biopharmaceuticals in R&D and clinical trials. Several key factors affect the economy of single-use TFF, two of which are membrane area and the number of cycles that a process requires. In addition, single-use systems greatly reduce the risk of cross contamination. Higher manufacturing flexibilities are also achieved.

Our case study concerns the production of a quantity of MAbs from a 1,000 L bioreactor culturing CHO cells. We compared traditional reusable TFF cassettes and disposable, presanitized TFF cassettes. Our results demonstrate the cost-effectiveness of built-for-purpose, single-use Sius cassettes as well as their ability to maximize the benefits of disposable TFF over traditional TFF processing.