Membrane adsorbers (MAs) are the fastest-growing segment in single-use bioprocessing. But their future is not entirely certain. According to BioPlan Associates’ latest survey of biopharmaceutical manufacturing, the MA market has been growing at ~20% annually since 2006 (1). Paradoxically, however, the segment may not be a true “rising star.” Our study also shows that MAs remain among the least-often adopted devices among biomanufacturers. So the question of how and whether MA technology can revolutionize bioprocessing remains open.

The current market for membrane adsorbers in single-use and other bioprocess applications is in the US$30–40 million range. That does not represent a very large business segment. However, it is growing at ~20% annually according to our 10th annual report, a figure that has been confirmed by industry participants. The major MA providers are Sartorius Stedim Biotech SA (Sartobind) and Pall Corporation (Mustang-Q), each making up about a third of the market. The remaining market is made up of sales by companies such as Asahi Kasei, BIA Separations, and Natrix Separations. Growth in this business segment is likely to continue as early stage clinical biological products move through the development pipeline, and end-user evaluations of MAs for virus removal and protein separation expand. 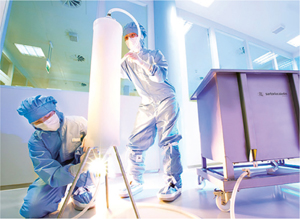 Changes in downstream processing come slowly in the biopharmaceutical industry. So when that expansion will occur is subject to debate. Yamuna Dasarathy (Pall’s director of marketing) says that “the market for membrane adsorbers is ripe for very rapid growth. This is reflected by the growth we have been seeing in our membrane adsorber product portfolio. We expect to see this rapid growth continue as products exit the biopharmaceutical pipeline.”

Although the market for membrane adsorbers began with a relatively small number of products, and the total market is still relatively small, some important applications for the technology are pushing its growth. Molly McGlaughlin (vice president of business development at Natrix Separations) explains: “Today, MAs are primarily used for a final clean-up or polish step for monoclonal antibody (MAb) and protein processes that may not be robust enough to remove impurities such as unwanted proteins, residual DNA, and virus. That will change as higher-performance membranes come on the market for polish applications and for future bind-and-elute true chromatographic capture applications.” It’s important to note that MA technologies will be adapted for continuous processes that warrant a rapid single-use format.

Despite the rapid growth from very limited sales six years ago, some specific conditions are required before the MA platform fully achieves its potential and develops into a competitive downstream processing technology. Current MAs on the market are hindered by relatively low binding capacities. McGlaughlin says, “Higher-performance MAs are needed, with higher selectivity and better separations comparable to current resin chromatography.” Such devices are being developed and advanced by a number of suppliers. For example, Natrix is launching NatriFlo HD membrane absorbers that provide high binding capacity while maintaining the speed of traditional MAs. Hydrogel chromatography technologies could provide higher selectivities and separation performance to displace resin-based bind–elute applications.

Single-use technologies are advancing in bioprocessing, especially for upstream and production operations. Downstream chromatography steps have largely been left out of that trend until now. For MAs, disposable chromatography is a competing technology. SteveTingley (Repligen’s vice president of bioprocessing sales and marketing) points out that “as disposable technologies are beginning to be applied to downstream processes, the industry is considering disposable/ single-use rather than campaign multiuse. For a variety of technical and performance reasons, MAs are not yet the panacea for all applications.” Tingley notes that recent development and commercialization of prepacked, disposable chromatography-column technology has provided the industry with an integrated facility process. It offers all the speed, utility, and other benefits emanating from a single-use strategy.

The main hurdle to market growth for MAs could be inertia in making changes to bioprocesses, especially in late-stage operations. Few if any changes occur at such a point in the biopharmaceutical industry unless a new technology can demonstrate that it is

These can be high hurdles to face for any technology. Many single-use technologies being adopted today at clinical scale began with slow growth profiles. MAs may well be following a similar growth curve. 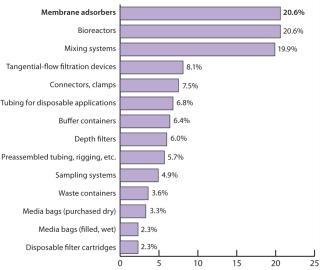 The question of whether and when membrane adsorbers make it into clinical- and commercial-scale bioprocessing is complex. It may affect the multibillion-dollar downstream-processing market in substantial ways. Francis Bach (Sartorius Stedim’s director of purification technologies) says that, “as single-use technologies become increasingly platformed, membrane chromatography is gaining traction in downstream purifications. Application areas include DNA, endotoxin, host cell protein, virus, and aggregate removal. Those impurities are easily captured in flow-through-mode membrane adsorbers that allow the target molecule to flow through the device with minimal dilution.” Bach notes that the number of approved biopharmaceuticals using membrane chromatography is still limited, but he points out that a critical mass of pipeline products are adopting this technology. “[Membrane adsorbers] are now validated in a large number (>100) of next-generation processes, both for clinical and commercial scale. As the industry adopts novel best practices to reduce costs for the existing pipeline and the subsequent ramp-up to biosimilars, membrane chromatography technology has proven that it is robust and easy to use and that it can enable leaner manufacturing platforms, regardless of scale.”

Continuous bioprocessing is an application for which membrane adsorbers coul
d find a solid footing for future growth. Mani Krishnan (EMD Millipore’s director of biopharm regulatory and compliance strategy) believes that “as customers start seriously considering continuous or semicontinuous processing, the use of membrane adsorbers will increase.” Millipore developed its ChromaSorb membrane adsorber as a single-use, flow-through anion exchanger designed for removing trace impurities, endotoxins, and viruses. It removes impurities over a broader conductivity range at greater salt concentrations than other anionic resins and membranes.

Despite the rapid growth of MA technologies (percentage-wise, albeit from a small starting point), adoption rates continue to be slow at clinical and commercial scales. The biopharmaceutical industry recognizes the advantages that MAs can provide, particularly in single-use applications. But most decision-makers remain concerned about adopting broad, alternative manufacturing platforms. Current column-chromatography methods work well and are well established with regulators, so replacing them is problematic.

The 10th Annual Report and Survey of Biopharmaceutical Manufacturing Capacity and Production yields a composite view and trend analysis from 238 responsible individuals at biopharmaceutical manufacturers and contract manufacturing organizations (CMOs) in 30 countries. The methodology also included more than 158 direct suppliers of materials, services, and equipment to this industry. The 2013 study covers such issues as new product needs, facility budget changes, current capacity, future capacity constraints, expansions, use of disposables, trends and budgets in disposables, trends in downstream purification, quality management and control, hiring issues, and employment. This quantitative trend analysis provides details and comparisons of manufacturing by biotherapeutic developers and CMOs. It also evaluates trends over time and assesses differences in the world’s major markets in the United States and Europe.

However, the pressure to implement single-use approaches to all unit operations (including downstream) continues to accelerate. Our 10th annual report indicates thatthe pressure has begun motivating end users to consider disposable downstream components and processes. One reason for that is the potential for single-use technologies to alter production strategies. Such devices enable manufacturing in ways that we have not seen before:

The future of MAs may be tied to single-use component adoption and is likely to follow the demand for better, more cost-effective disposables in downstream manufacturing processes. Suppliers are continuing to develop new and innovative devices, and over the next 5–10 years, disposable membrane adsorbers should be increasingly accepted as effective tools and as alternatives to column chromatography.