Compared with traditional approaches such as chemotherapy and radiotherapy, monoclonal antibodies (MAbs) have become the most successful cancer treatments in the past 20 years (1). With great clinical success in many therapeutic areas, MAbs now account for >40% of the entire biotechnology drug market, and sales are projected to be >US$160 billion over the next few years in the United States alone (2). More than 35 MAbs have been approved for clinical use, and hundreds more are filling industry development pipelines. As a therapeutic class, MAbs have proven to be very effective against autoimmune diseases as well, especially for cases in which targets are known and well defined. 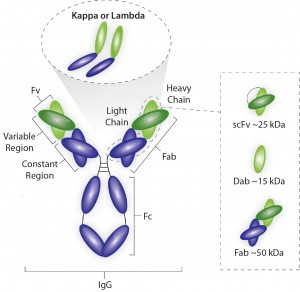 Figure 1: Average sizes of Fab, dAb, and scFv antibody fragments, each of which has a kappa light chain that binds protein L without interfering with the antigen-binding site

Structurally, MAbs are monospecific antibodies: Y-shaped multidomain proteins with two light chains (kappa or lambda) and two heavy chains (Figure 1). Newer classes of antibody-like molecules are currently under investigation and in clinical use: antibody fragments. They are smaller molecules that can have similarly┬Āhigh affinity for their target antigens but (because of their size) can penetrate tissues more easily, including crossing the bloodŌĆōbrain barrier for certain indications (3). Different types of fragments include fragment antigen-binding (Fab), single- domain antibody (dAb), and single-chain Fv (scFv) fragments. Bispecific antibodies featuring two active binding sites ŌĆö and sometimes based on antibody fragments ŌĆö are another type of product that is attracting growing interest. For example, AmgenŌĆÖs bispecific antibody blinatumomab (Blincyto) combines an immune-activation mechanism with a tumor-targeting mechanism. The US Food and Drug Administration (FDA) recently approved it for clinical use.

The presence of an Fc region in ŌĆ£traditionalŌĆØ MAbs has enabled the bioprocessing industry to adopt a platform approach to their purification based on the use of protein A affinity chromatography. Presenting a challenge to manufacturing, antibody fragments and some bispecific antibodies lack the Fc region necessary for binding to protein A. The lack of platform alternatives for capture and purification of antibody fragments without that region has hindered their industrial manufacturing and has necessitated increased time, money, and resources for developing specific and complex purification┬Āprotocols. Here we present a recombinant technology based on protein┬ĀL that has enabled development of a cost-effective affinity chromatography platform approach for Fc-lacking antibody fragments such as Fabs and dAbs.

Protein A is to MAbs as Protein L is to┬ĀFragments?
Originally found in Staphylococcus aureus bacterial cell walls, protein A (in its recombinant form) provides a single affinity-capture step that delivers high purity for MAbs while allowing follow-on purification steps to remove remaining contaminants. A generic platform approach to downstream processing based on protein A has been significantly reducing MAb process development times for 20 years. High specificity for the Fc region has made protein A the leading affinity ligand for Fc-fusion proteins as well. Before its development, purification steps for Fc-containing molecules were similar to those developed for other recombinant proteins such as human growth factor and insulin, based on a series of complex and individually tailored protocols.

The development of a recombinant protein A ŌĆö with its high affinity for the Fc region (crystallizable fragment) associated with the two heavy chains found in MAbs ŌĆö has provided a platform approach. The protein A capture step is followed by typically secondary and often tertiary polishing steps using other chromatography media. Such polishing steps can include cation-exchange chromatography (frequently used for separating IgG monomers from unwanted aggregates) followed by anion-exchange chromatography to remove endotoxins, residual host-cell proteins, and residual DNA, which are present in low quantities following the initial protein AŌĆōbased affinity operation.

Until recently, developers of antibody fragments have put specially tailored protocols into place for each fragment they need to purify. First isolated from the surface of Peptostreptococcus magnus bacteria, protein L was known in the scientific community to bind kappa light chains. But it was considered unsuitable for use in the biomanufacturing industry. Protein L chromatography media are available for small-scale use, but they have been cost-prohibitive for large-scale applications. Anticipating market growth for antibody fragments leading to a need for a reliable purification platform, GE Healthcare Life Sciences has developed a high-affinity recombinant protein L medium with improved flow properties for large-scale manufacturing. That work led to the development of Capto L media for industrial applications, taking into consideration bioprocessorsŌĆÖ need for cost-effectiveness and high efficiency.

Relative costs of using a recombinant protein LŌĆōbased chromatography medium for two types of antibody fragments (Fabs and dAbs) have been compared with purifying a MAb using two commercially available media based on recombinant protein A (Table 1). Although protein L resin appears to cost more than protein A, the relative costs presented are based on grams (g) of purified antibody or fragment. Because Fabs and dAbs are considerably smaller than whole antibodies (Figure 1), the molar amounts of fragments purified per unit of chromatography media would be higher than for MAbs. Fragment production efficiency also can be lower for antibody fragments, but they can possess higher potency than MAbs. Such fragments could provide promising therapies for rare diseases or for indications with no treatments previously available, such as colchicine poisoning (4, 5).

Table 1: Relative cost per gram ($US) of recombinant protein L for antibody-fragment capture and MAb purification using protein A

A Fab Platform
Fabs were the original antibody fragments, first created by using a proteolytic enzyme such as papain to cleave an antibody into two single- binding Fab fragments. Each chain had one variable heavy and light chain linked by disulfide bonds. Kappa subclass Fabs containing a kappa light- chain fragment can be captured using chromatography based on a recombinant protein L. The following case study describes a purification platform based on recombinant protein L that provides high purity and high capacity for a Fab isolated from Escherichia coli supernatant (6).

A series of high-throughput development tools were used to set up the workflow (2). They included a 96-well plate format for evaluating the capture step and small-scale columns in an ├äKTA chromatography system for dynamic binding capacity (DBC) studies. A design of experiments (DoE) approach was used to investigate three factors: pH and NaCl┬Āconcentration of the wash and elution pH. Load and residence time were kept constant, and E. coli protein content (ECP) and yield were measured to find optimum conditions using sweet-spot analysis (Figure 2). The team verified a 96% Fab yield with an ECP of 12 ppm. 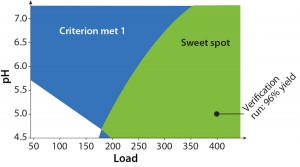 Figure 2: Sweet-spot analysis of yield and Escherichia coli protein (ECP) content for recombinant Protein L used in a capture step; the green surface shows where both required criteria were met.

After capture and cation-exchange, an anion exchanger was used to further reduce contaminant levels. High loads provided high yield, and increased ECP reduction correlated with pH. Residence time and load had no influence. Process verification for the three steps confirmed a total process yield of 87% with 0.8% aggregate content. ECP and endotoxins were significantly reduced, and protein L leakage was below detectable limits.

dAb┬ĀPurification┬Āand Polishing
Single-domain antibody fragments consist of either a variable heavy chain or light chain and can be as small as 12ŌĆō15┬ĀkDa. Essentially, they are as small as antibody fragments can get without losing their antigen-binding capacity: only about a tenth of the molecular weight of a normal antibody. And dAbs can remain stable even when exposed to extreme conditions of temperature and pressure, as well as denaturing chemicals. The next case study involves a capture step with a chromatography medium based on recombinant protein L and two polishing steps using multimodal media to produce a high- purity dAb product (7).

A kappa light-chain dAb was expressed in the periplasm of E. coli and purified using a three-step platform approach. Following heat treatment of the bacterial suspension, microfiltrate was loaded onto 1-mL columns prepacked with Capto L and run on an ├äKTA chromatography system. All yields were >92%. The team simulated the process in silico with a Monte Carlo computer algorithm, which uses random sampling to compute results for optimization. The lowest ECP (<110┬Āppm) was measured at high NaCl, with either high or low pH. Table 2 shows how DBC compares for dAbs, Fabs, and MAbs captured with protein A.

A polishing step was then carried out using a cationic multimodal medium, and ECP was reduced to 50 ppm from a starting content of 164 ppm by altering pH. Again, the team used a Monte Carlo simulation examining highest yields.

The final polishing step used a multimodal anion exchanger amenable to flow-through mode for highŌĆō isoelectric-point proteins like this dAb. NaCl and load were studied, with dAb concentration included as an uncontrolled factor. Again, sweet-spot analysis helped the team determine an operating space with low NaCl concentration and low sample concentration. Monte Carlo simulation helped them to better define their operating space to optimize ECP reduction despite the lower yield that resulted (Figure 3). 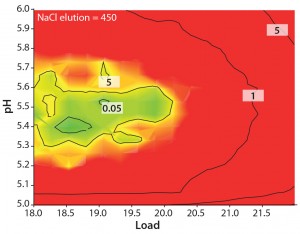 Figure 3: Monte Carlo simulation for yield and ECP content in the multimodal anion-exchanger step at a particular sample concentration; results come from more than 100,000 in silico experiments.

Each stage of the dAb purification platform used in this study was verified by running tests within the area defined by the Monte Carlo simulation while monitoring for yield, ECP, protein L leakage, and endotoxin content. Total process yield was ~81% with excellent reduction in ECP and endotoxin and final protein L below measurable levels. The team also used sodium-dodecyl sulfate polyacrylamide gel electrophoresis (SDS-PAGE) to show purity of the dAb by a single band detected at the expected molecular weight. Liquid chromatographyŌĆōmass spectrometry (LCŌĆōMS) showed just one peak at the correct molecular weight, further confirming purity of the protein.

Other Uses for Protein L┬ĀAffinity
Single-Chain Fv Fusion Proteins: Single-chain Fv fragments have a single binding site and contain antibody V regions of heavy and light chains, which are connected by a short flexible linker. These fragments contain no Fc portion and so are unable in most cases to be purified by protein A; however, a recombinant protein L platform offers an alternative when kappa light chains are present. In one study at GE Healthcare Life Sciences, columns prepacked with a chromatography medium based on recombinant Protein L showed high selectivity and high capacity for scFv fragments (even from challenging samples such as animal plasma) with yields of 93% (8).

Bispecific Antibodies Without Fc Regions: Bispecific antibodies include two active binding sites on one molecule to interact with two separate and discrete antigens or epitopes at the same time. Many such products are now in clinical trials for leading pharmaceutical companies such as Genentech/Roche, Pfizer, Sanofi, AbbVie, Chugai, and Amgen. Bispecific antibodies often have Fc regions, allowing them to be purified through existing protein A platforms. Others (e.g., AmgenŌĆÖs BiTE molecules) lack the Fc region. For bispecifics lacking that region that have kappa light chains, recombinant protein L chromatography media can be used for affinity capture in a bispecific purification platform. Protein L media thus could become an essential tool in efficient process development for this particular type of antibody-based therapies.

Different┬ĀLock, Different┬ĀKey
Antibody fragments make up a promising subclass of biopharmaceutical product based on fragments of whole antibodies. Their enhanced properties include improved tissue penetration and the ability to cross difficult tissue barriers within the body, as well as the possibility of microbial expression. Flexible platform- based developments in protein purification will be essential to those fragments for which methodologies such as protein A chromatography do not apply. Such solutions need to provide high yield and selectivity while reducing costs and improving efficiencies. Recombinant protein L chromatography provides an industrial platform for antibody fragment purification. Future improvements in this area should help it grow to match the needs of biopharmaceutical manufacturers and their innovative therapeutic pipelines.

One thought on “An Industrial Platform Solution for Antibody Fragment Purification”