Carefully designing a purification procedure to reduce the number of steps is an efficient way to reach high process economy. Expanded-bed adsorption (EBA) technology is a powerful alternative to conventional clarification techniques. It can improve process economy while increasing process robustness and yields.

A client requested help on improving a process that had been used to produce a chimeric Fab fragment (Fab effector molecule) in Escherichia coli for phase 2 trials. The process did not have the required robustness for phase 3 studies because product yields unacceptably fluctuated between 50 and 100%. The original manufacturing process included two cross-flow filtration steps, which considerably increased process time. Our primary goal was to increase the robustness of the process while maintaining downstream processing operations to allow our client to continue with phase 3 clinical trials.

The chimeric Fab fragment is a secretory protein produced in E. coli with rather low titers. High cell densities and long expression rates are necessary. Traditional purification technologies often fail with secreted proteins because bacteria undergo lysis with high cell densities, resulting in viscous feedstocks that cannot be processed easily with adsorption chromatography using a conventional packed bed of adsorbent (1). Viscous feedstocks require clarification before application to a chromatography column. However, combining centrifugation and filtration often leads to long process times. Using comparatively large units requires significant capital expenditure and recurrent costs for equipment maintenance. It also results in significant product loss due to product degradation and yield fluctuations. Because a target substance must be recovered from a large volume of crude feed, we tested whether direct adsorption of Fab fragment from such feedstocks could increase process robustness and reduce time and cost compared with the original process.

EBA is a highly efficient and effective procedure for direct extraction and purification of recombinant proteins from nonclarified particulate-containing feedstocks (2,3). Initial clarification, concentration, and purification are unnecessary.

Adsorbent is expanded and equilibrated by applying an upward liquid flow to a column (Photos 1). A stable fluidized bed is formed when particles are pushed upward in a column at a velocity corresponding to their sedimentation velocity. The degree to which a bed expands (how far up in the column a particular bead is transported) is controlled by size and density of adsorbent beads and the linear flow velocity and viscosity of mobile phase. A bed is stable when only small circulatory movements of adsorbent beads are observed. Crude, unclarified feed is applied to the expanded bed with the same upward flow as used during expansion and equilibration.

Target proteins are bound to an adsorbent while cell debris, cells, particulates, and contaminants pass through unhindered. Weakly bound material, such as residual cells, cell debris, and other particulate materials are washed out from the expanded bed using upward liquid flow. When all weakly retained material has been washed out from the bed, liquid flow is stopped and adsorbent particles quickly settle in a column. Flow is reversed, and captured proteins are eluted from a sedimented bed using suitable buffer conditions.

The eluate contains a target protein, increased in concentration, clarified, partly purified, and ready for further purification by packed-bed chromatography. After elution, the bed is regenerated by washing it with downward flow in sedimented bed mode using buffers specific for the type of chromatographic principle applied. Finally a clean-in-place procedure is applied to remove nonspecifically bound, precipitated, or denatured substances from the bed, and restore it to its original performance.

Although the Fab fragment is a highly active protein, and a 1,000-L bioreactor is sufficient for manufacturing commercial supplies, EBA technology is scalable at least 1,000-fold from development to production without significantly modifying process parameters. The procedure was developed on a 10-mm diameter column. For production, we used a 30-cm diameter column with 28-cm height in a sedimented and 55-cm height in an expanded mode. Feedstock was applied directly onto the adsorbents in expanded-bed mode. We increased the ionic strength of the buffer and reversed the flow to pack the bed and elute the protein. Target protein was eluted as on a conventional ion-exchange column with a reduction of the product volume by a factor of 10. Eluate can easily be processed through microfiltration, so existing downstream processing operations could be maintained.

At the capture stage, high throughput is very important for processing large sample volumes while keeping the scale of equipment as small as possible and giving the shortest possible cycle time. Processing time is critical at this stage because fermentation broths and crude cell homogenates contain proteases and glycosidases that reduce product recovery and yield degradation products that may be difficult to remove later. To prevent degradation, the time a product is exposed to such enzyme activity should be minimized. For this reason, the target molecule should bind as quickly as possible to the adsorbent. That can be achieved with EBA because crude feed can be applied directly to an adsorbent without prior clarification or concentration.

Tailoring chromatographic characteristics of an adsorbent for use in EBA includes careful control of adsorbent beads’ sedimentation velocity. For our client’s Fab fragment, we compared FastLine SP adsorbent from UpFront Chromatography A/S (www.upfront-dk.com) with another EBA column material that both allow formation of stable fluidized beds at high operating flow velocities. FastLine SP material uses a separation mechanism based on cation exchange by means of sulfopropyl groups and combines crosslinked agarose with an ultrahigh-density phase of tungsten carbide. The main difference between the two media
was the ligand structure of their functional groups, which also affects the separation performance and yield. The two materials showed immense differences in small-scale EBA experiments concerning chromatography efficiency. 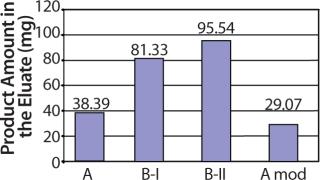 An Alternative for Viscous Feedstocks

Performance of EBA depends on whether a target molecule is secreted from a production organism into culture medium (4) or if it is accumulated intracellularly (5). Secretion systems normally generate dilute, low-viscosity feedstock that contains rather low amounts of protein and intracellular contaminants, thus providing favorable conditions for downstream processing. However, our client’s Fab fragment production demanded high cell densities and long expression rates, favoring lysis of bacterial cells and release of large fragments of nucleic acids, which significantly increased feedstock viscosity (6).

The main concern when processing a feed based on a secretion system is maintaining intact cells, thereby preventing the release of cell membrane components and intracellular contaminants such as DNA, lipids, and intracellular proteins that may foul the adsorbent or block the inlet distribution system of a column. Release of intracellular proteases is a further concern because it will have a negative impact on recovery of biologically active material. In addition, contaminants interfere with classical membrane separation techniques (depth, membrane and/or crossflow filtration steps) and thus reduce efficiency, yield, and robustness. EBA reduces the amount of cell lysis that occurs (compared with traditional centrifugation and cross-flow filtration unit operations) because cells are maintained in a freely-flowing, low-shear environment during the entire capture step. 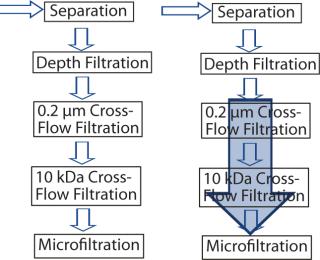 We showed that EBA on crude extracts is a powerful alternative to conventional clarification techniques. It clarifies cell broth, concentrates product, and purifies at the same time. Although this was not our primary objective, EBA significantly reduced product impurities, resulting in shorter cycle times and higher column life times in downstream processing. The original process included two cross-flow filtration steps that led to product yield fluctuations, but the redesigned EBA process resulted in absolutely robust product yields. Processing time decreased by 19 hours (56%), and time for conducting clean-in-place reduced by 18 hours (also 56%). Overall productivity for the Fab fragment increased nearly twofold with FastLine SP media, and the overall process economics are better due to lower media consumption (water for injection, steam, buffers), lower burden of quality control samples (only load and elute), and reduced facility time. So introducing EBA made this entire process much simpler, more robust, and cost-effective, and it allowed us to move our client’s product into phase 3.