Concerns about the economic viability of biosimilars center on their high development cost relative to small-molecule generics, along with (and partly because of) the difficulty in demonstrating bioequivalence for these complex molecules. Immunogenicity is a particular area of increasing vigilance at both the US Food and Drug Administration (FDA) and the European Medicines Agency (EMA) (1, 2). Unwanted immunogenicity is an underlying cause of multiple deleterious effects for all protein-based therapeutics — including loss of efficacy, altered pharmacokinetics, and reduced stability (3,4,5,6,7,8) — and it poses a major risk for product failures and recalls.

Failure to demonstrate equivalent or (ideally) lower immunogenicity for a biosimilar is both costly and risky. Development of an unsatisfactory or inconsistent immunogenicity profile during development — or much worse, during postmarket surveillance — may be economically disastrous. It can even lead to costly reformulation work and additional clinical studies. Complicating the problem further, immunogenicity may sometimes arise only after repeated administration over an extended period. So it is imperative that all potential sources of unwanted immunogenicity be dealt with stringently as part of a risk-management plan during development to ensure a predictable, stable, and acceptable immunogenicity profile during manufacturing and storage through lot expiry. 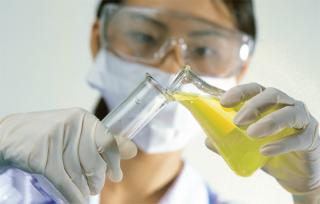 In final drug formulations, aggregation is dealt with largely by including surfactants. But other factors need to be considered during formulation optimization: pH, ionic strength, counterions, cosolvents, chelating agents, antioxidants, and antimicrobial preservatives. Tween 80 and Tween 20 polysorbates (PS-80 and PS-20, respectively) from ICI Americas are perhaps the most commonly used surfactants used in biotherapeutic formulations to prevent protein aggregation. Table 1 lists some such products containing them.

Polysorbates are effective in preventing protein aggregation, but they contain ether linkages (polyoxyethylene moieties). PS-80 has unsaturated alkyl chains that spontaneously and rapidly autooxidize in aqueous solution to yield protein-damaging peroxides, epoxy acids, and reactive aldehydes. Formaldehyde and acetaldehyde have been shown to induce unwanted immunogenicity in proteins, and in some instances they actually cause reaggregation of protein therapeutics (10,11,12,13,14,15,16,17,18,19,20). Those reactive species are continuously produced during manufacturing processes and throughout the time that biotherapeutics sit in inventory awaiting use, so the associated damage (and resulting immunogenicity) can progressively worsen.

At a May 2012 FDA public hearing on biosimilars, Richard Dolinar, MD — head of the Alliance for Safe Biologic Medicines (www.safebiologics.org), an organization of biotechnology companies, patients, and physicians — succinctly summarized immunogenicity concerns. “Unwanted immunogenicity is the preeminent safety challenge associated with all biological therapeutics and can result in unexpected and sometimes severe adverse effects. Complicating matters, side-effects may only appear in patients after higher doses or prolonged duration of treatments and may be attributed to a number of patient-, disease-, or product-related factors.” His full testimony is online at www.safebiologics.org/pdf/FDA/ASBM-Testimony.pdf.

Because immunogenicity of biotherapeutics is an important focus of concern by regulatory agencies, physicians, and informed patients alike, the need for nonautooxidizing replacement surfactants has become acutely apparent. This needs to be proactively addressed by the industry and its suppliers.

Induction of unwanted immunogenicity is among the most serious problems that result from protein aggregation (21). Such immunogenic responses by patients may decrease the therapeutic efficacy of a polypeptide — or worse. Neutralizing antibodies to interferon beta (used to treat multiple sclerosis), for example, led to higher relapse rates and more disease activity as measured by brain magnetic resonance imaging (MRI) scans (3, 4, 22, 23). Antibodies developed against recombinant erythropoietin (EPO) were shown to produce a potentially fatal side effect, the life-threatening condition known as “pure red-cell aplasia” in some patients (8).

In another study, 15–30% of hemophilic patients treated with recombinant human factor VIII (rFVIII) developed inhibitory antibodies toward that essential clotting factor. With hemophilia A, such neutralizing antibodies can cause life-threatening bleeding episodes and significant morbidity, necessitating treatment with a prolonged course of a tolerance-inducing therapy to reverse immunity (5,6,7). Other biotherapeutics shown to elicit unwanted immune responses include thrombopoietin (24); granulocyte macrophage–colony-stimulating factor (GM-CSF) (25); interleukin 17 (IL-17) (26); the monoclonal antibody (MAb) therapeutics infliximab (27), rituximab (28), adalimumab (29), and natalizumab (30); and other MAbs specific to tumor-necrosis factor (TNF) (31).

MAbs Pose a Special Problem: Although many biotherapeutic proteins exhibit a tendency toward aggregation, MAbs are especially subject to significant aggregation. This may be because their natural biological activity depends on strong protein–protein association. Relatively high therapeutic doses needed for clinical efficacy (1–3 mg/kg by weight) require substantially concentrated for
mulations (which exacerbate aggregation) to allow for intravenous administration of volumes that are small enough for patient convenience and comfort.

MAbs are highly effective therapeutics across a broad range of diseases in oncology, autoimmune, and inflammatory diseases, such that they now represent one of the largest and most rapidly growing segments of the pharmaceutical industry. At present, more than 30 therapeutic MAbs are marketed in the United States and Europe for a number of indications. US sales alone in 2010 reached ~$18.5 billion, and growth is expected to continue at a combined annual growth rate (CAGR) >10% (32, 33).

Drug makers are striving to reduce administration volumes further to minimize costs and increase patient compliance by making subcutaneous delivery possible. So it has become desirable to formulate MAb therapeutics at ever-increasing concentrations, which further necessitates inclusion of surfactants to prevent aggregation. It is estimated that ~70% of all MAb therapeutics currently include polysorbate 80 (34). The rate at which oxidative damage to proteins occurs is a function not only of the concentration of reactive oxidative species, but also concentration of the therapeutic protein itself. So the problem of oxidative damage is exacerbated by these newer, more concentrated formulations. 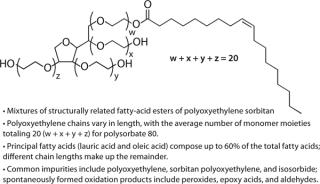 Table 2 lists oxidative species found in polysorbates along with the aminoacyl side chains that are affected by different reactive species. There is a great deal of variation in the nature and content of oxidative species found in different polysorbate lots. For example, one analysis of 14 lots of polysorbate 80 from four different manufacturers showed a 26-fold range in hydroperoxide content (290–7,700 nmole/g, with an average of 1,807 nmole/g) (23). The level of reactive contaminants in these preparations varies over time because autoxidation of polysorbates is spontaneous and progressive.

“High-purity” polysorbates are available commercially and marketed as such. Such preparations are treated to remove peroxides and packaged with oxygen excluded from their container headspace, where it is replaced with nitrogen or argon. Unfortunately, oxidation resumes as soon as the contents come into contact with oxygen, and that oxidation reaction accelerates once the polysorbates go into an aqueous solution. Typically, reactive species are detectable within one or two weeks following purification. Excluding oxygen from the manufacturing process and final packaging should in theory reduce oxidative damage overall (49), so this approach has been used for some biotherapeutics.

The amounts of polysorbate present in biotherapeutics are significant. Table 1 lists the molar ratios of polysorbate/API for some MAb examples and other biotherapeutics. Those ratios are substantial in some instances. For the five antibody products listed, the ratio ranges from a low of 0.46 for Herceptin trastuzumab to a high of 7.46 for Avastin bevacizumab. For the nonantibody biotherapeutics, the ratios range from 0.18 to 56.00. Each PS-80 molecule contains an average of 20 polyoxyethylene moieties. So depending on the extent of oxidative degradation, each such molecule could contribute more than one molar equivalent of reactive peroxides.

It is not meaningful to measure residual reactive contaminants in final biotherapeutic products because reactive species are used up in reactions with proteins. They form neoantigens within protein structures, creating nonsimilarity to self-molecules. If possible, it would be better to assess the degree of protein damage by looking for modified aminoacyl groups in a biotherapeutic over time during stability studies, which may ultimately become a regulatory requirement.

It is worth noting that other classes of surfactants useful in drug formulations — such as the poloxamers (typically known by trade names including Pluronics and Kolliphor from BASF and Synperonics from Sigma-Aldrich), Brij 35 detergent, and related molecules — also contain polyoxyethylene moieties, which are the source of spontaneously formed peroxides. Because those surfactants are less frequently found in biotherapeutics currently on the market, little work has been reported in the literature yet relating to their effects.

Immunogenicity assessment is complicated and multidimensional for biotherapeutics. In recent years, a number of articles have been published dealing with the underlying philosophical approach to making meaningful determinations (50,51,52,53,54,55). Wadhwa and Thorpe provide an excellent summary, detailed description, and analysis of the pros and cons of the most well-accepted screening assays for antibody detection (55). The methods they included are direct enzyme-linked immunosorbent assays (ELISAs), bridging ELISAs, electrochemiluminescence assays, radioimmunoprecipitation assays, and surface plasmon resonance.

An underlying conclusion to be drawn from all of those studies is that no one method is adequate alone, so a combination of two or more such methodologies should be incorporated in a multitiered detection ap
proach. A growing number of reports concern additional methods of detecting and assessing antibody response involving the use gene expression and cell-based assays (56,57,58,59,60).

Unwanted immunogenicity is a preeminent safety challenge associated with all biological therapeutics, and it can lead to unexpected and sometimes severe adverse effects. Polysorbate surfactants commonly used to prevent protein aggregation (a principal cause of unwanted immunogenicity) can contribute further to unwanted immunogenicity with chemically reactive species that are essentially ubiquitous contaminants of all commercially available preparations. Resulting chemical modification of aminoacyl side chains by those reactive contaminants leads to creation of neoantigens within protein structures. Because of their nonsimilarity to self-molecules, those can induce an immune response by activating antibody-secreting B cells and subsequently generate antibodies against a therapeutic. MAbs are a biotherapeutic class that is particularly prone to the aggregation problem because of the need to be administered at high doses in relatively small administration volumes.

Perhaps the two greatest technical challenges for biosimilar manufacturers will be demonstrating equivalent (or ideally superior) immunogenicity compared with their reference innovator products. Biosimilar makers must demonstrate that their excipient impurities are similar to those in the innovator products — or better yet, absent. Replacing polysorbates with non-autooxidizing surfactants can eliminate related lot variation in excipient composition and purity. That may limit resulting variations in immunogenicity caused by lot-to-lot differences in levels of chemically reactive contaminants. Certain alkylsaccharides highly effective in preventing protein aggregation have been put forth as nonoxidizing alternatives to polysorbates (61, 62) and are currently in development.

By eliminating polysorbates as a source of variable and progressively increasing immunogenicity, clinical-trial and postapproval lots are more likely to exhibit similar biochemical and immunogenicity characteristics. That should reduce the potential for product recalls later on. And this would seem to be a useful and fundamental element of any risk-management plan for new biotherapeutics — especially biosimilars and “biobetter” products.