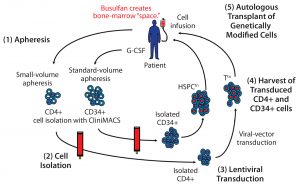 Figure 1: A cell-delivered gene therapy process begins with (1) apheresis, in which granulocyte colony stimulating factor (G-CSF) is administered to stimulate production of stem cells and their release into blood. Small-volume apheresis is taken for CD4+ T-cell isolation, and larger volumes are taken for CD34+ hematopoietic stem progenitor cells (HSPCs). After (2) a cell isolation step to purify the desired cell populations (T cells or HSPCs), purified cells are transduced with a therapeutic lentiviral vector (3). Following harvest of transduced T cells and HSPCs (4), modified cells are collected and cryopreserved. Finally (5), genetically modified autologous cells are transplanted back to the same patient. Busulfan chemotherapy is administered before transplantation to create “space” in the patient’s bone marrow for the therapeutically modified cells.

Cell-delivered gene therapy is making an impact on a range of diseases (1–17). To date, successful treatments have generally been in conditions involving genetic deficiencies/abnormalities, for which introduction of a normal gene allele has been corrective (1–12, 18). Such an approach requires a vector containing the normal allele to overcome the mutant or lacking gene. The vector of choice for cell-delivered gene therapy is often a lentivirus that integrates and expresses introduced therapeutic genes in host target cells and their progeny. Lentiviral vectors have been used for a range of gene therapy applications and in a number of cases have proven to be curative (1–7, 11).

A clinical-stage biotechnology company, Calimmune has multiple gene therapies in its pipeline. The most advanced product is for HIV/AIDS, a global epidemic that affects over 35 million people worldwide. Through the past 15 years, academia and the biotechnology industry have found a way to harness and preserve the innate efficiency of lentiviruses while modifying them to deliver healthy genetic materials into cells. Unneeded parts of the viral genome are removed, and the viral “backbone” (the vector) is retained as a therapeutic vehicle. The required therapeutic gene or genes are inserted into that viral backbone, and the resulting complete therapeutic vector ensures that a given therapy can spread throughout a patient’s body.

Using self-inactivating lentiviral vectors prevents consequent viral replication while maintaining their integration into host-cell genomes and expression based on exogenous promoters. This is particularly useful for modifying hematopoietic stem cells to provide correction to hematopoietic disease. Lentiviral vectors appear to be safer than the gamma retroviruses used in the past because they do not cause insertional mutagenesis (22–26).

A Multistep Process
Cell-delivered gene therapy is a multistep process (Figure 1). First, a patient is apheresed to remove either a small volume of T cells or a larger volume of stem cells that have been mobilized from the patient’s bone-marrow compartment. Then cells are cultured, during which time a viral transduction step introduces the therapeutic gene(s) (13, 27–29). Following release testing, the genetically modified cells are reinfused into the patient.

All that requires a good manufacturing practice (GMP)-grade vector for cell transduction. GMP vector production can be a limitation to the widespread use of gene therapy. Some companies in this space have developed viral vector and cell manufacturing processes to introduce gene constructs into cells more efficiently. An important part of doing so is producing viral vectors on a large scale to expand the applicability of cell-delivered gene therapies for treating widespread diseases such as cancers and HIV–AIDS.

Our group uses a lentiviral vector based on HIV-1 as part of its therapeutic strategy to defeat HIV and attack a number of other diseases (19–21). It is important to note that the lentivector itself has been sufficiently altered so that it cannot release active HIV into a patient’s body. The viral backbone is an efficient mode of expressing beneficial genetic materials within transduced cells.

Viral Production Platform: The biopharmaceutical industry is working with a range of viral vectors (Table 1). The advantage of lentiviral vectors is that they integrate into target cells and continue to be expressed both in the original cells and their progeny. However, one important limitation to the use of lentiviral vectors has been a need to perform transient transfection when using enveloped vesicular stomatitis virus (VSV). To circumvent that limitation, a stable producer mammalian cell line has been developed and shown to be applicable for gene therapy (18, 30, 31). Based on HEK 293 T cells, it is being developed as the Cytegrity platform based on work conducted by John Gray’s group at St. Jude Children’s Hospital (30). 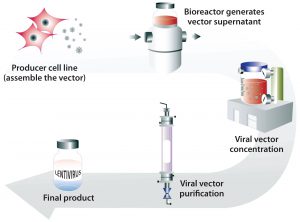 Transient transfection of mammalian cells concurrently introduces several plasmids to them in culture to induce production of lentiviral particles. A stable producer cell line differs in the sense that it has the construct within it and can be “turned on” to produce virus at any time. In the case of the Cytegrity system, removing tetracycline is the trigger (30). The advantage of this approach is that large quantities of therapeutic virus can be produced readily without the need for extensive expertise. It is a scalable system (Figure 2). In a 2016 report, X-chromosome–linked severe combined immunodeficiency (SCID-X1) was corrected using vectors made using this technology (18).

Making Gene Therapy Widely Available
Large-scale lentiviral vector production and streamlined cell manufacturing steps should make gene therapy readily available to treatment providers. Those might be specialized clinics or hospitals. To treat many patients, we need a sufficient quantity of the necessary therapeutic material — in this case the therapeutic vector. For relatively rare genetic conditions involving tens of patients, meeting demand is no problem. However, more widespread diseases involving hundreds, thousands, and hundreds of thousands of patients present a more technical challenge of creating large batches of viral vectors within a reasonable timeframes and at an accessible price point.

Price is a major factor. Calimmune estimates that the Cytegrity lentiviral vector bioproduction process could be more cost efficient than current methods for vector production. In fact, the company is making its platform available to other developers through a material-transfer agreement process. In an effort to improve access to affordable gene therapy globally, Calimmune and St. Jude Children’s Research Hospital have agreed that no royalties should be due from its use in developing-world countries if the resulting products are sold at minimal or no profit. Based on recent successes, we envision gene therapy becoming available more widely around the world.